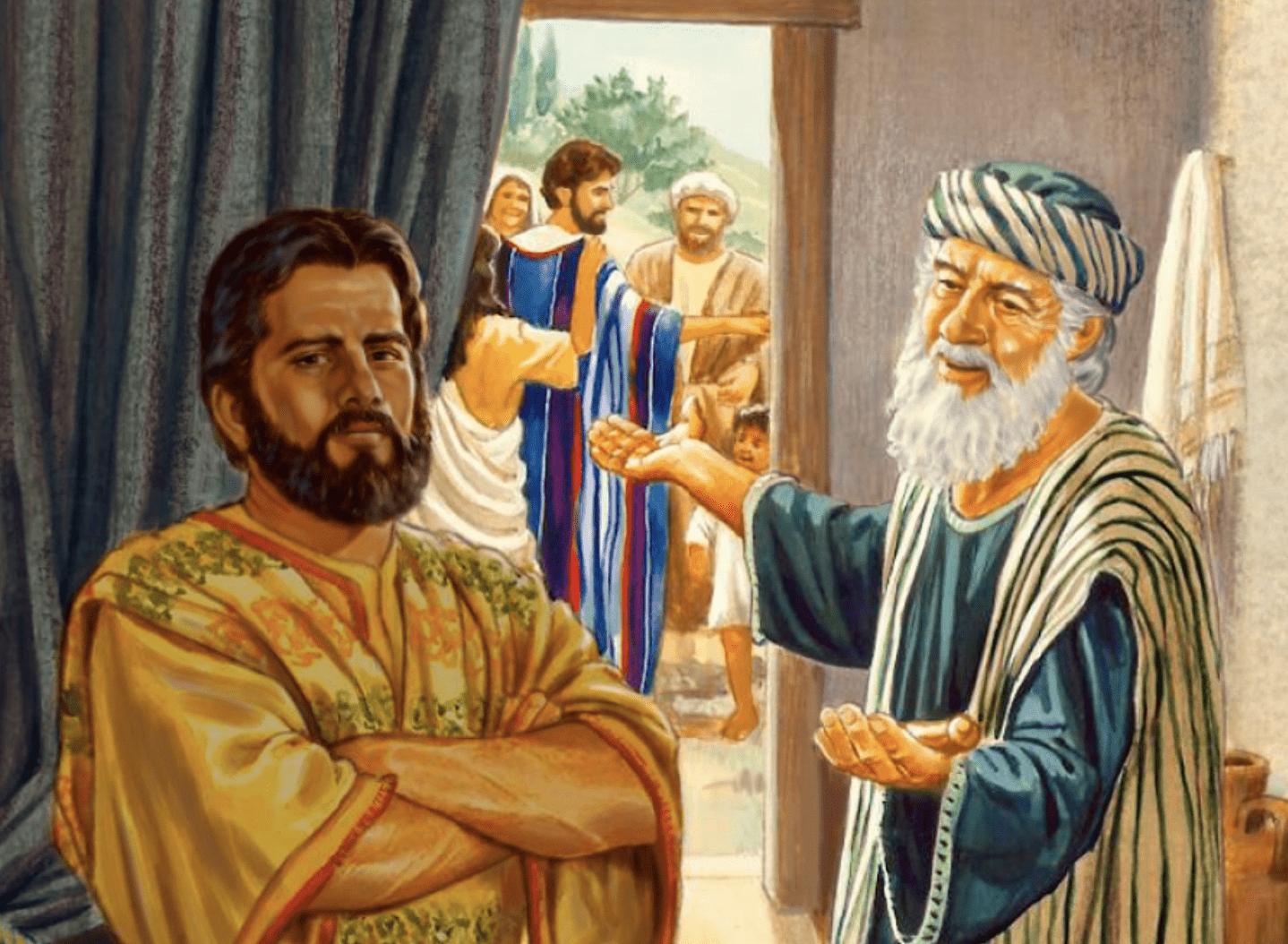 A Crucial Lesson from the Brother of the Prodigal Son

Editor’s Note: Our friend and longtime Meridian writer Larry Barkdull passed away. To remember and honor him this is one of a series of his past articles that we are republishing regularly. Cover image via JW.org.

How many people, trapped by sin or the urgency of their circumstances, helplessly flounder about while inside they are silently screaming? How should we react when we perceive that a person is in misery? Jesus gave us the answer in the account of the Prodigal son’s brother.[i]

The Heart of the Gospel Message

Luke recounted an instance when Jesus was eating with known sinners.[ii] This incensed the Pharisees, and they challenged Jesus about the propriety of his actions. Apparently, the thing that disturbed the Pharisees more than sinners living amongst them was the Lord’s willingness to have fellowship with such people. Jesus’ response to the Pharisee’s criticism was his relating three parables: The Lost Sheep, The Lost Coin and The Prodigal Son.

The central themes of these parables are the love of Christ, the value he places on a wayward soul, and his disdain for hypocrisy in people who ought to be about the work of the Father. These parables are sometimes called the “heart of the gospel.” If the gospel doesn’t work on this level, nothing else matters.

When we read these parables, we are drawn to how much value Jesus places on a wayward soul and the effort he is willing to expend to reclaim that soul. But there is a side story that is often overlooked: the story of the prodigal son’s brother.

The Brother “would not go in”

We are informed that when the prodigal son finally returned home, his father immediately reinstated the boy into full family fellowship, which was represented by the robe, ring and shoes. Then the father called together his household for a celebration and a feast.

Everyone was happy, except one: the prodigal’s brother. Upon hearing the news that the prodigal had returned and was suddenly his equal, the brother reacted with anger and discouragement. Significantly, we are told, he stood outside his father’s house “and would not go in.” The symbolism of remaining outside the Father’s house is striking.

When the father came out to beg the second son to reconsider (notice that the father has now rushed to recover both his sons), the boy complained that he was being treated unfairly. This selfish attitude betrays the boy’s true character. Was he really the dutiful son? Was he really interested in his father and his father’s concerns? If he had been interested in his father’s concerns, why had he apparently abandoned his father to shoulder alone the burden of a lost son?

We have no mention of the second son’s waiting with his father, day after day, scanning the horizon for a familiar figure to finally appear. Over the long, agonizing years, did the second son ever kneel with his father to plead for his brother to reconsider his ways and return home?

There are other glaring character flaws. For example, Jesus makes no mention that this brother ever tried to talk his prodigal sibling out of leaving home or thereafter to go out and try to find him. We wonder if he was relieved that he no longer had to associate with his sinful brother. Perhaps his judgment of his brother urged the separation in the first place.

I once spoke with a prodigal. She was sick of her sinful life and wanted to come home. She had made a recent attempt, quietly sitting alone on the back row of Relief Society. No one came to sit by her; no one shook her hand. She attracted what she interpreted as judgmental glances. You see, in her neighborhood, she is a known sinner. She came to church for love and relief but she was met by Pharisees.

Now she was afraid for her daughter, who also wanted to return to church, but this daughter was an unwed mother who was struggling to recover from years of drug abuse. And everybody in the ward knew.

Both of the mother and the daughter could have made it all the way home, if someone had rushed to their side, helped them return, greeted them with a robe, ring, shoes, and thrown a celebratory feast. At that critical moment, a true friend could have made all the difference. The mother and the daughter wanted to escape the “far country,” stop eating with the swine and return to the full fellowship of home, but they were not sure if their brothers and sisters would welcome them.

Remember, the heart of the gospel message is The Lost Sheep, The Lost Coin and The Prodigal Son. If the gospel does not power to save from incredible distances, it is just a nice philosophy. Jesus gave these parables to defend his preferring to work with sinners over his seeking the fellowship of the self-righteous.

He set the perfect example of being about his Father’s business, which is redemption. He always had his antennae up, searching for the one who had wandered, seeking the one who was lost, and patiently waiting and praying for the rebellious one to reconsider and start home.

True sons and daughters of God do the work of their Father. Like Jesus, they plead with their prodigal siblings not to leave home, but when that happens, they go out to find them. They search the mountains and valleys; they shine a light and sweep and seek for their precious missing brothers and sisters.

I will love you even if…

All the gospel learning in the world does not compensate for failure to do the work of redemption. Both Paul and Mormon-two witnesses!-taught us that without charity we are nothing.[iii] Charity is a different kind of love; it is the celestial quality of love–saving love.

“Charity is the pure love of Christ,” meaning the type of love that comprises the power of Christ to search out, seek, wait patiently, reinstate and rejoice.

True sons and daughters of God are “filled with this love.”[iv] They assume that there are “no coincidences in the lives of righteous people.”[v] If they encounter someone who needs loving and saving, they assume that God placed that person in their path. They take responsibility.

They are not afraid to love: “There is no fear in love; but perfect love casteth out fear.”[vi] Rather, when they encounter someone who is hurting and who wants to come home, they show love unconditionally; they respond with their consecrated time, talents and means to embrace and rescue the tender prodigal.

True sons and daughters of God test their love against the “even if” list. For example–

I will love you even if you … lie.

I will love you even if you … steal.

I will love you even if you … yell at me.

I will love you even if you … abandon your covenants.

I will love you even if you … drink, smoke, take drugs.

I will love you even if you … commit sexual sin.

I will love you even if you … choose an alternative lifestyle.

I will love you even if you … leave home and don’t talk with me for years.

I will love you even if you … betray me.

I will love you even if you … are committed to prison.

I will love you even if you … have an abortion.

We might ask ourselves: At what point would my love cease for a family member or a non-family member? Where, would we judge, does God’s love cease? One of the exacting prices of becoming like God is to learn to love “even if.”

Genuine love-charity-saving love-offers returning prodigals a soft place to land. Harsh judgment will turn them away; charity will embrace them and create a network of healing support. Most prodigals will eventually try to return home, but if they have no loving, accepting friends waiting for them, they probably will not remain.

Hypocrisy at Its Worst

Hugh Nibley wrote: “The worst sinners, according to Jesus, are not the harlots and publicans, but the religious leaders with their insistence on proper dress and grooming, their careful observance of all the rules, their precious concern for status symbols, their strict legality, their pious patriotism….”[vii]

The worst kind of hypocrisy is to pretend piety and loyalty to God but turn away from the work of God. The prodigal’s brother proclaimed his righteousness, but had never lifted a finger to help his father bring his brother back. Then when his prodigal brother finally did return, he would not accept his brother as an equal part of the family. He judged that his brother was unworthy of the family’s love. He refused to participate in the Father’s work of redemption, but he expected the Father to reward him anyway.

The Opposite of Love is Apathy

Hypocrisy is at its worst when it rears its head with harsh judgment or by idly standing by. Elder Marvin J. Ashton said, “Hate is not the opposite of love. Apathy is.”[viii]

In making the effort to come home, prodigals take a tremendous risk. He (she) simply does not know if love and welcome are waiting there. A ring, robe and shoes and a celebratory feast are beyond his imagination. More than likely, the prodigal will slip into church quietly the first time, hoping that no one notices the odor on his clothes or his unconventional appearance.

Perhaps, prodigals are already among us and have come and gone for a long time. Or perhaps they regularly attend, but retreat to an area where they can sit alone and try to remain unnoticed–somewhere they can silently scream because of the pain of their circumstances.

In short we do not know the entire story. To me the lesson is not who was right or wrong in the end. To me one of the morals of the story is that the Brother (like each of us) eventually had to come to himself. Hopefully, he did sooner rather than later. Do we?.

I have read this parable many times and never got from it what you have discussed in this article. I don't judge the elder son. We don't know his heart and mind. When the younger son returned and was welcomed whole-heartedly by their father and the elder son was angry about it, I feel he was most likely hurt and confused because of what his brother had done and now by what their father was doing. We don't know what was felt by the elder brother after the father's explanation of his actions. To assume jealousy is to put words in the Savior's mouth. Everything the father currently owned belonged to the elder son upon the father's death as the younger son had his share already. Therefore the merrymaking upon the return of the younger son was offered out of love for the son. You said they were again equal and that is not correct. Both were still sons of the father but the elder son was the faithful "owner" if you want to put it that way. The younger son would have his room and board but would not gain again what he had lost. It is good to "come home" but you can't get back the wasted time or erase the consequences of bad decisions even if you have fully repented. You can only go on from the current day forward.