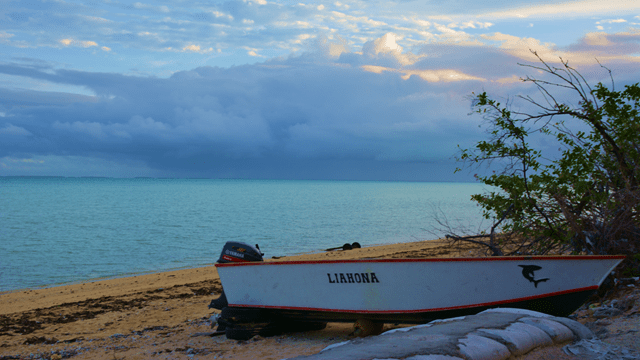 Most readers of Meridian Magazine have probably never heard of the nation of Kiribati (pronounced Kirr-i-bas), and yet it has one of the highest percentages of Latter-day Saints in the world (between 16%-17%). It is also one of the most beautiful, remote and endangered nations in the world–perhaps the most vulnerable in relation to climate change. In fact, Kiribati is predicted to be the first nation to lose all of its land to rising sea levels.1

Kiribati is an archipelago consisting of thirty-three Micronesian islands in the mid-Pacific. Located at the juncture of the Equator and the International Dateline (due south of the Hawaiian Islands), it has a population of approximately 100,000 and stretches over a vast oceanic territory of 3.5 million square kilometers (the width of the United States) and is the only country in the world that lies within all four hemispheres. Many of the islands in Kiribati are barely above sea level and, with rising oceans due to climate change, are imperiled. In order to survive, inhabitants (the majority of whom reside on Tarawa) will be required at some point before mid-century to find another place of habitation. The government has purchased a large tract of land on Fiji and Anote Tong, the nation’s President, is encouraging his fellow citizens to begin “migration with dignity” to other nations in the South Pacific.

Latter-day Saints have been in Kiribati since the early 1970s when Waitea Abiata, a local elementary school teacher and headmaster, sent a dozen of his students to study at the LDS Liahona High School in Tonga. During their time in Tonga, all the students converted to Mormonism and when they returned home began sharing the gospel with family, friends and neighbors. Among their first converts was their teacher who had sent them to Tonga. He also became the first branch president in Kiribati. Since then (1975), the Church has grown rapidly and consistently. At present, there are approximately 17,000 members of the Church in Kiribati, concentrated mostly in Tarawa and nearby islands.

At the invitation of the Pacific Area Presidency, a team from the Liahona Children’s Foundation visited Kiribati between Christmas and New Year’s (2014) to determine the level and extent of malnutrition among members there. The Liahona team, consisting of Sara Walker (an international public health & nutrition specialist ), Robert Rees (Vice-President of the Foundation) and three Latter-day Saint sisters from Australia (Carol Armstrong and Liz and Courtney Pocock of the Island Rescue Project), travelled to Tarawa, Kiribati in late December to screen children and pregnant and lactating mothers in the Tarawa East and Tarawa West Stakes. The Liahona team was assisted by local members, senior missionaries and Brother Iotua Tune, former head of the Church-run Moroni School in Tarawa, former stake president, and current Church’s Kiribati Service Center Manager. The purpose of the screenings was to determine the degree and extent of malnutrition.

As explained in earlier Meridian articles, the Liahona Children’s Foundation is an independent, non-profit foundation run by volunteer Latter-day Saints. Dedicated to eliminating malnutrition and illiteracy among Latter-day Saint children and their friends in the developing world, the Foundation is currently working with area and local leaders in over 120 stakes worldwide, including in Africa, Cambodia, Central America, South America, Mongolia and the Philippines. The foundation’s work is supported by generous contributions from individual Latter-day Saints.

The Liahona team conducted four screenings in the Tarawa West Stake on December 30 and five screenings in the Tarawa East Stake on December 31. In total, we screened 550 children and 25 pregnant and lactating mothers (These figures include 100 non-members). Of the children screened, approximately one-fifth (20.4%) were identified as malnourished, whereas 8% of the mothers were so identified.

The Foundation is able to assess malnourishment based on growth charts established by the World Health Organization (WHO), using gender, age, height and weight. This is standardized for all children under five globally. The WHO growth charts also help screeners identify the type of malnutrition: wasting (low weight for height), stunting (low height for age), and underweight (low weight for age). According to the WHO, “Stunting develops as a result of sustained poor dietary intake or repeated infections or a combination of both”; “wasting develops as a result of recent rapid weight loss or a failure to gain weight”; and underweight is “a low weight-for-age.” Of the 20% of children who qualified as malnourished, 5.5% were identified as wasted, 13% as stunted, and 8.7% as underweight.

Conditions on Kiribati predict that malnutrition would be a serious problem. Kiribati is one of the poorest and least-developed countries in the world.2 It has few natural resources, limited local food sources (except for fish), very limited water resources (mostly from rainwater) and very high unemployment (over 60%). The infant mortality rate is 54/1000, compared with 6/1000 for the U.S. Life expectancy is nearly twenty years below that of U.S. citizens. Bacterial infections and food poisoning are common, as are skin diseases; diabetes on Kiribati and the Marshall Islands is the highest in the world3; and the “prevalence of age-adjusted tobacco use is the highest in the world.”4 At present there is a serious outbreak of the mosquito-borne disease, Chikungunya. In other words, on many accounts, Kiribati is in critical need of help. Without the aid of humanitarian organizations like the Liahona Children’s Foundation, the Island Rescue Project, the United Nations and the European Union, and assistance from neighboring countries, including Australia, New Zealand, China and Taiwan, things would be even worse.

The Liahona Children’s Foundation cannot address all of these problems but we are committed to the one that most seriously affects Latter-day Saint children–malnutrition. In the coming months, the Foundation, working in concert with the Pacific Area Welfare Manager and local leaders, will set up a program in Kiribati designed to accomplish two main objectives: 1) improve the nutritional status of both children under five and pregnant and lactating women; and 2) encourage self-reliance by teaching good hygiene, breastfeeding behavior, and enhanced nutritional practices. These measures will reduce the suffering of saints in Kiribati by improving the long-term nutritional outcomes of children and women.

Seeing the faces of Latter-day Saint children during our screening on Kiribati helped us see why children were so precious to the Savior. Their openness, curiosity, resilience and even joy in the face of hardship are always an inspiration.

Those who wish to contribute to the Foundation’s efforts in Kiribati and other nations can make tax-deductible contributions at www.liahonachildren.org.

Our parents from Idaho served in Kiribus (sp) in the '80s. They loved the people and lived among them for 18 months on Abeyong (sp). They noted all of the above and could only have survived by air and boat service bringing in all of their supplies. These people need help of a significant nature and I hope this appeal helps.