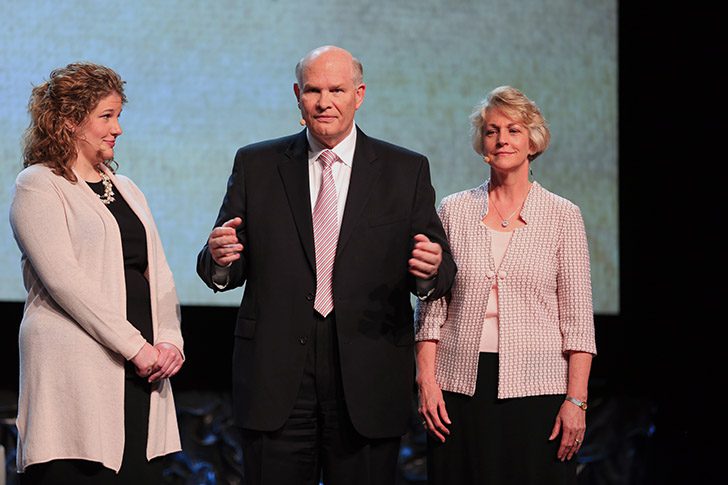 Elder Dale G. Renlund, speaking with his wife Ruth, and daughter Ashley, at the opening session of Rootstech Family Discovery Day, strengthened an apostolic challenge that has been given for the past two years.

Elder Neil L. Andersen challenged the youth two years ago, “Prepare as many names for the temple as baptisms you perform in the temple.” Then last year the challenge was strengthened to add this phrase: “and help someone else to do the same.”

Elder Renlund further beefed up the challenge and issued it to all, “Prepare as many names for the temple as ordinances you perform in the temple and teach others to do the same.”

If you do this, he said, blessings will flow to your family. You’ll find not only protection from the temptation and ills of this world but also power to change, power to repent, power to be sanctified, power to learn, power to bind your family together and heal that which needs healing.

Then he invited all to share their experiences on his Facebook page using #templechallenge as the hashtag.

The real power of family history and temple ordinances comes from combining the two together. Elder Renlund told a personal story to demonstrate why this matters so much.

In 1912, when there were only 756 missionaries in the whole world, a group from Sweden went to Larsmo, a small island off the coast, where they taught Elder Renlund’s grandparents Lena Sofia and Leander. They were baptized the next day and became members of the first branch in Finland.

Yet life was tough, and in 1917 Leander died of tuberculosis when Sofia was pregnant with their tenth child. She was an impoverished, peasant woman, who had to struggle to keep her family intact. He said, “For nearly two decades, she did not get a good night’s rest. She hustled at odd jobs during the day to scrape together enough food to eat. At night, she nursed dying family members.”

In 1963, Elder Renlund’s father, a native of Finland who had immigrated to Salt Lake City, returned as a building missionary and took his family with him. It was during that visit he first met his grandmother. “I had just turned 11 and she was 87. She was stooped from a lifetime of hard labor. She was so bowed over that when she stood from her chair, her height did not change. The skin of her face and hands was weather-beaten, as tough and textured as worn leather. She stood as best she could and pointed to a photo of Leander on the wall and said to me, in Swedish, ‘Det här är min gubbe’—this is my hubby.”

Elder Renlund, who had been studying Swedish at school, thought she had made a mistake in tense. Shouldn’t this be “This was my hubby”?

Of course, with time, he came to understand that she had made no mistake at all. She had a gospel perspective that had strengthened her all her difficult days. He said, “Lena Sofia knew that her long-dead husband was and would remain hers throughout the eternities. Through the doctrine of eternal families, Leander remained a presence in her life and part of her great hope for the future.”

He said, “In a blazing affirmation of her faith in the sealing authority, in 1938 Lena Sofia submitted the family records for her deceased children who were over 8 years of age when they died,” said Elder Renlund. “That way, their temple work could be performed, although she herself would not get to the temple during her lifetime.”

She was one of those described in Hebrews 11:13 who“died in faith, not having received the promises, but having seen them afar off, and were persuaded of them, and embraced them,”

Shortly after her death in 1966, Mariana, mother of Elder Renlund and daughter-in-law of Lena Sofia, took her name to the Genealogy Department of the Church. “The man behind the counter told her that Church policy stated that someone had to have been dead for at least a year before temple work could be done for that person,” Sister Ashley Renlund said. Grandma replied, ‘I don’t like that answer. Let me talk to someone who can give a different one. She’s waited long enough.’’
Mariana’s husband quipped, “I should probably feel sorry for the man downtown who said nothing could be done for at least a year.”

Elder Renlund’s mother was determined that Lena Sofia would receive those ordinances for which she had yearned her entire and difficult life. It worked. Less than two months later and with the authorization of the President of the Church, Lena Sofia’s temple work was completed. Now it is Church policy that a person who hasn’t been able to enjoy the blessings of the temple because of the distance doesn’t have to wait a whole year after their death for their ordinances to be completed. They have indeed waited long enough!

Elder Renlund and his family compared the power of combining family history and temple work with dynamite. Up until the mid 1800’s, black powder was the most powerful explosive in the world. It was regularly stable and safe.

The only way to harness the full power of the nitro-glyerin was to couple it with Kieselguhr, a stabilizer. Together the two substances create dynamite, a tool that completely changed the world. “Dynamite wasn’t the discovery of a new material, but it involved putting two known materials together to make them safer, more effective, and more useful.”

Family history and temple work are each powerful, but combined they are like the image described in Ezekiel 47 of a river flowing forth from the temple that grows larger and larger and heals everything in its path.

“The growth of the river is similar to the exponential growth of our family through the generations,” said Elder Renlund. “The Lord has a plan to overcome Lena Sofia’s personal misfortune, our loss, your tragedy, in fact everyone’s calamity. He restored to the earth His priesthood and His sealing authority. Lena Sofia knew that.”

The last part of this presentation is missing. "No one is off the hook"

Thank you so much for reporting such a powerful account of Apostle Renlund's own grandmother and her fervent faith, knowledge and promptings to bind their family together. Wish I could've attended Rootstech with my sister & brother-inlaw.

What Should We Do In Our Trials?

In honor of his 90th birthday, President Oaks shares 12 lessons learned through the decades