OREM, Utah – Tears of a King, a bio-pic of Elvis Presley that explores Elvis’ spiritual search, will be discussed as part of the LDS Film Festival in Orem, Utah, this Friday.

Film writer and director Rob Diamond, Producer Josh Pearson, and Director of Photography/editor/ producer Kels Goodman will discuss their experiences in the creation of their new motion picture at 2:00 PM on January 19.  It will be one of several presentations given as part of the 6th Annual LDS Film Festival, chaired by Christian Vuissa.

The location is the SCERA Theater at 745 South State Street in Orem. (www.ldsfilmfestival.org)

The festival runs from January 17-20 and features dozens of films by, for, and about members of The Church of Jesus Christ of Latter-day Saints. Tickets for all events are available at 801/225-ARTS, online at scera.org or at the door.

Tears of a King was filmed in Orem in September 2006.  It explores a part of Elvis’ life never before told – his personal quest for spiritual knowledge and peace.  During their presentation, the filmmakers will give festival-goers a “sneak peak” at some of the footage from the movie, which is still being edited.  There will also be a Q&A session.

Millions know Elvis Presley’s music and the flashy jewel-studded costumes, but few have explored the man behind the myth, the loneliness behind the legend, and the spiritual hunger lurking beneath the glitz and glamour of a rock ‘n roll “King.” 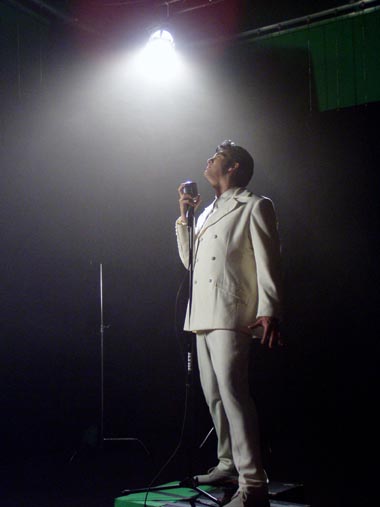 Elvis Presley, as depicted in Tears of a King

Behind closed doors, Elvis often escaped from his daunting public life into his bedroom at Graceland for weeks at a time – especially in his later years.  This is where much of the film Tears of a King takes place.  The filmmakers built a replica of Elvis’s room from the few existing photos and floor plans of the mansion in Memphis, in order to give fans a glimpse of a place where no fan has gone before – Elvis’ personal sanctuary.  The actual room at Graceland was sealed shortly after his death and remains untouched even today.

It is there that we meet the man Elvis, not the star.  We see a man searching for answers in a world that for him has gone wrong.  We witness first hand the struggles and hopes of a man humbled by his excesses – a grieving human being in despair.

Elvis Aron Presley grew from humble beginnings to become one of the most famous men ever to walk the face of the earth.  He was known worldwide almost as well as Jesus Christ himself.   Elvis seemingly had everything anyone could ever want.  But what he wanted most – a family – he had lost due to bad choices and public demand on his time and energies.

Much of the film is told in surreal flashback sequences where Elvis comes face to face with his past.  In a manner similar to the Scrooge character in A Christmas Carol, he gains insight from each of his reflections.  And like Scrooge, he is guided in his discoveries about himself by a “mysterious man” – a supernatural character from the Beyond.

Newcomer Matt Lewis plays Elvis in the film, and in addition to his uncanny physical resemblance to Presley his speaking and singing voice almost perfectly match that of Elvis. In several musical numbers Lewis captures both the voice and spirit of “The King” so exactly that many visitors to the movie set thought they were hearing and seeing a ghost.

Power comes with fame and fortune, and Elvis lived in a world governed by his own rules, which ultimately became the catalyst for his demise and also his eventual journey to redemption. In spite of his human weaknesses, he was known to be a kind and generous man and a devout Christian – a good soul who sought peace and knowledge from his Maker. An avid reader, Elvis devoured many books and studied many religions. In one particular ancient and sacred volume, the film shows the “King of Rock n’ Roll” as he comes face to face with the King of Kings and finds spiritual guidance in a time of great need and sorrow.

The film’s producers were able to obtain permission to use in the movie a copy of The Book of Mormon that was owned by Elvis, which is now kept in the LDS Church archives.

Tears of a King tells a story of struggle, of self-discovery, and of forgiveness and redemption.  It is a film to be loved by both young and old alike. Regardless of religious affiliation, Tears of a King promises to be both entertaining and enlightening for movie-goers worldwide.

Tears of a King will be released in theaters during August of 2007 to coincide with the thirtieth anniversary of Elvis’s death.  At the same time, a factual documentary program about Elvis’s spiritual quest will be released on television and DVD.

Both films are produced by “7 Films 7” Productions and Matthew Reese Films.  For more information go to www.tearsofaking.com or call 801/824-2843.