Weary Him Until He Blesses You | Meridian Magazine

Weary Him Until He Blesses You

Editor’s note: This is the thirteenth article in a series of excerpts from Jeffrey M. Bradshaw’s new book, entitled “Temple Themes in the Oath and Covenant of the Priesthood.” Color and black-and-white editions of the book are available on Amazon.com and at selected LDS Bookstores (including EbornBooks, BYU Bookstore, and the FAIR LDS Bookstore). An iBooks version is can be purchased from the Apple iBookstore. Downloadable articles and a pdf version of this book are available at www.templethemes.net. Links to the full series are listed at the end.

Author: In discussing temple matters, I have tried to follow the model of Hugh W. Nibley, who was, according to his biographer Boyd Jay Petersen, “respectful of the covenants of secrecy safeguarding specific portions of the LDS endowment, usually describing parallels from other cultures without talking specifically about the Mormon ceremony. This approach earned him a great deal of trust from both General Authorities and from Church members” (B. J. Petersen, Nibley, p. 354). For Nibley’s views on confidentiality as it relates to temple ordinances, see, e.g., H. W. Nibley, On the Sacred and the Symbolic, pp. 553-554, 569-572.]

The Parable of the Unjust Judge: “Weary Him Until He Blesses You”

The lesson of Jesus’ little-remembered parable of the importunate widow and the unjust judge was a recurring allusion in the teachings of the Joseph Smith.[1] The parable reads:[2]

And he spake a parable unto them to this end, that men ought always to pray, and not to faint; Saying, There was in a city a judge, which feared not God, neither regarded man: And there was a widow in that city; and she came unto him, saying, Avenge me of mine adversary. And he would not for a while: but afterward he said within himself, Though I fear not God, nor regard man; Yet because this widow troubleth me, I will avenge her, lest by her continual coming she weary me. 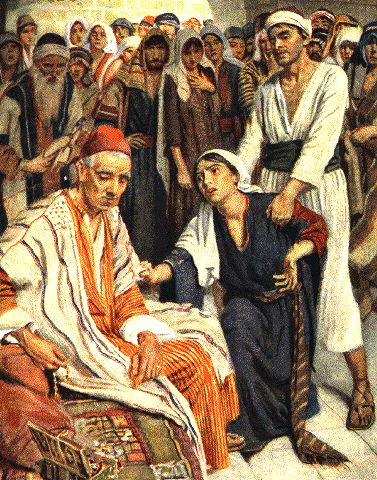 Harvey summarizes the cultural background of the story:[3]

The setting was a small town. A widow-which was a byword for someone reduced to poverty through no fault of her own-had been the victim of some fraud or sharp practice, and in order to recover her money she had to go to law. In such cases, this did not involve a formal sitting of a court; it was sufficient for the parties to agree upon a qualified lawyer to arbitrate between them. The little town, in any case, may have possessed only one such lawyer; if so, the widow’s only hope of redress lay in persuading this lawyer to attend to her case. Now it was a fundamental principle of Jewish justice that a judge received no payment. There was therefore only a moral obligation for the lawyer to attend to all the cases brought before him. This particular lawyer was not sensitive to his moral obligations-he cared nothing for God or man; possibly he waited until litigants brought him a present before he concerned himself with their affairs. But the widow, by again and again thrusting her papers in front of him, finally got her way.

… The justice of the widow’s claim is taken for granted; the point is the difficulty she had in getting it attended to. 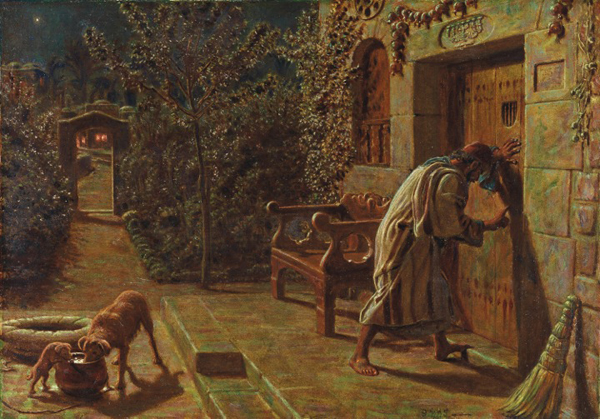 In what sense can God be compared to such a judge? Elder Talmage explains:[5]

Jesus did not indicate that as the wicked judge finally yielded to supplication, so would God do; but He pointed out that if even such a being as this judge, who “feared not God, neither regarded man,” would at last hear and grant the widow’s plea, no one should doubt that God, the Just and Merciful, will hear and answer… The Lord’s purpose in giving the parable is specifically stated; it was “to this end, that men ought always to pray, and not to faint.” [= Greek ekkakeo, to be weary or to lose heart]

How did Joseph Smith apply this parable to the promises contained in the Oath and Covenant of the Priesthood? In an 1839 discourse on the topic of the Second Comforter, he taught that it is “our privilege to pray for and obtain”[6] the knowledge that we are sealed up to Eternal Life. As we pray for this privilege, we should also prepare for it. To this end, we are told in revelation to “give diligent heed to the words of eternal life,” and to “live by every word that proceedeth forth from the mouth of God.”[7] The Prophet explained that it is the First Comforter, the Holy Ghost, which “shall teach you” until the joyous moment when, at last, as the Savior promised, “ye [shall] come to Me and My Father.”[8] Encouraging each of us to follow the example of the importunate widow, Joseph then said:[9]

God is not a respecter of persons. We all have the same privilege. Come to God. Weary Him until He blesses you.

Links to all of the articles in this series-

Part 1 “Why Do We Participate in Temple Ordinances?”

Part 3 “Knowledge as the Principle of Salvation“

Part 4 “How Are We Physically and Spiritually Reborn in the Temple?”

Part 5 “What is the Endowment?”

Part 6  “Passing the Angels Who Stand as Sentinels“

Part 7  “The Meaning of the Atonement“

Part 8 “Becoming the Seed of Abraham”‘: The Sealing and Healing Power of Elijah

Part 9: “The Church and Kingdom”: Becoming Priests and Kings

Part 10: “The Elect of God”: What Does It Mean to Have One’s “Calling and Election Made Sure?“

Part 11: “All That My Father Hath Shall Be Given Unto Him”: Receiving the Kingdom

Part 12: The Second Comforter: “The Father Teacheth Him”

Part 13: “Weary Him Until He Blesses You”

Part 14: “What are the Three Degrees Within the Celestial Kingdom?”

[1] On all other occasions besides the one cited in the body of this chapter, the Prophet applied the lessons of the parable to the early Saints’ quest for justice from government leaders. Six days prior to the Lord’s reiteration of the parable and its application to the need of the Saints to importune for redress in the loss of their lands in Jackson County Missouri (D&C 101:81-94), Joseph Smith aptly alluded to the parable and counseled the Saints. His wording paralleled parts of the later revelation (J. Smith, Jr., Teachings, 10 December 1833, p. 36, emphasis added. See also J. Smith, Jr., Words, discourse probably given October 1843, p. 415 and A. C. Skinner et al., Parables, pp. 104-108):

Therefore, this is my counsel, that you retain your lands, even unto the uttermost, and employ every lawful means to seek redress of your enemies; and pray to God, day and night, to return you in peace and in safety to the lands of your inheritance: and when the judge fail you, appeal unto the executive; and when the executive fail you, appeal unto the president; and when the president fail you, and all laws fail you, and the humanity of the people fail you, and all things else fail you but God alone, and you continue to weary Him with your importunings, as the poor woman did the unjust judge, He will not fail to execute judgment upon your enemies, and to avenge His own elect that cry unto Him day and night.

In a letter to his uncle John Smith written on June 17, 1844 (ten days before his martyrdom), the Prophet indirectly alluded to the parable in the context of instructions in case of mob violence against the Saints in Nauvoo. In this instance, the “unjust judge” that was to be wearied was Governor Thomas Ford of Illinois (J. Smith, Jr., Documentary History, 6:486, emphasis added):

We have sent to the Governor, and are about to send again, and we want you to send affidavits and demand the attention of the Governor, and request protection at his hand, in common with the rest of us that by our continual wearying we may get him to investigate the whole matter.

[4] With permission, National Gallery of Victoria.

The application of the parable follows easily. Christians needed to have no doubt about the rightness of their cause; but, in the face of calumny and persecution, they longed for vindication. This was expected to take the form of a reversal of present values, a bringing to light of the things known only to faith, and the visible establishment of the Christian community as the chosen people of God-in short, the end of the present order, the judgment, and the new age. Those things were taking longer to come than perhaps the earliest generation of Christians expected (a disappointment which may underlie the difficult phrase, “while he listens patiently to them”; and alternate rendering is… “while he delays to help them”-which would make this clearer). But they must keep on praying for them. If even a neglectful human judge yielded at last to constant entreaties, how much more certainly would God vindicate his chosen! But that moment of vindication would always involve judgment. Anyone who had lost faith (perhaps because of the delay) would have reason to fear it. “When the Son of Man comes, will he find faith on earth?”