The announcement made last week at General Conference that young men could now serve missions at 18 and young women at 19 has been met with enthusiasm on all fronts. The impact has been immediate as colleges, families, wards and stakes have seen a rush of excited young men and women completing their applications and requesting their ecclesiastical interviews.

I’ve watched my nieces and nephews eagerly jump at the surprise opportunity to depart for their missions earlier than once anticipated. I thought of how much courage the youth of the Church have consistently displayed through the years, starting with young Joseph at the tender age of 14 and over a million missionaries since then who have bravely faced opposition and untold hardship in countries around the globe.  I also considered the plight of three young priests who served together in a priest quorum together in Hamburg, Germany during World War II. 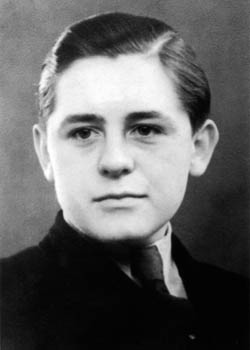 Helmuth Gunther Hubener had grown up in the LDS Church, and was a member of the Boy Scouts. His mother and grandparents were also members of the Church.  However, in 1935, the Nazis banned the Boy Scouts in Germany and required all boys to join the Hitler Youth. Later when the war started, listening to foreign radio broadcasts was strictly forbidden by the Nazis, who were concerned that the lies and propaganda broadcast by the allies could harm the German war effort.

One day in 1941, Helmuth, then 16, found a forbidden shortwave radio his brother Gerhard had left in a hall closest and he started listening to radio broadcasts from the BBC about the true state of affairs occurring in the World War.  He invited his two best friends from his priest quorum, Karl-Heinz Schnibbe then 17, and Rudolph Wobbe, then 15, to listen with him.

What they heard in the autumn of 1941 shocked them into action.  Using the typewriter that belonged to his branch, young Helmuth and his friends started composing anti-fascist leaflets and anti-war pamphlets to draw people’s attention to the untruths being spread by the German war machine about World War II. They also bravely pointed out the criminal behavior of Adolf Hitler, Joseph Goebbel and other leading Nazi high command leaders.  The young priests even addressed larger topics such as the futility of the war, Germany’s certain defeat, and the evils of the Third Reich.

Over the following few months, Helmuth wrote over 60 different pamphlets containing material from the BBC broadcasts. The boys then secretly duplicated and distributed thousands of their fliers throughout Hamburg, by pinning them to bulletin boards, inserting them into mailboxes, placing them in telephone booths, and stuffing them in coat pockets.  The fliers often pointed out specific instances where the German people were being lied to by the German High Command.  Some of his titles were: Down with Hitler, Hitler the Murderer! Who is Lying! and The Voice of Conscience!

Some six months after their secret efforts commenced, young Hubener was arrested by the Gestapo at his workplace in February 1942, while trying to translate some of his pamphlets into French so that his young friends could distribute them among POWs. Young Helmuth had been tracked down by Erwin Muessener, a Gestapo agent, after a tip from a Nazi sympathizer.  After several days of beatings and torture, Helmuth finally disclosed the names of his accomplices, but in an attempt to protect them from harsher treatment, he claimed to be the mastermind of the conspiracy and explained that his friends played minor roles in assisting him.

On August 11, 1942, over six months after his arrest, Hubener’s case was tried before the Voksgerichtshof, or Blood Tribunal, in Berlin.  Hubener, the leader of the group, was tried and convicted of conspiracy to commit high treason and aiding and abetting the enemy. He was sentenced not only to death, but to the loss of his civil rights, which meant that he could be (and was) severely mistreated in prison, and given no bedding or blankets in his cold prison cell.  Schnibbe, 18, was sentenced to five years in a labor camp. Wobbe, 16, was sentenced to 10 years.

Hubener’s lawyers, mother and the Berlin Gestapo all argued for clemency in his case, hoping to have his sentence commuted to life imprisonment.  They argued on appeal that he had fully confessed his crimes and shown himself to be still morally uncorrupted.  However, the Reich Youth Leadership (Reichsjugendfuhrung) would have none of it and contended that the dangers posed by Hubener’s activities to the German war effort made the death penalty necessary.

On 27 October 1941, the Nazi Ministry of Justice upheld the Volksgerichtshof’s verdict.  Hubener was told of the appellate court’s decision at 1:04 p.m. on the scheduled day of his execution and beheaded in the execution room at 8:13 p.m. the same day, at Plotzensee Prison in Berlin.  He was just 17 years old, one of the youngest executions by the Nazi regime.

Hours before his scheduled execution, Hubener wrote to a fellow branch member the following letter: “I am very grateful to my Heavenly Father that my miserable life will come to an end tonight–I could not bear it any longer anyway. I know that God lives and He will be the Just Judge in this matter. My Heavenly Father knows that I have done nothing wrong….I look forward to seeing you in a better world!”

Years later, Brother Schnibber would say that the hardest thing he ever did was say goodbye to his young friend Helmuth.  He told Helmuth he would see him again and hugged him. With tears in his eyes, Helmuth said, “I hope you have a better life and a better Germany.”  Then he cried.  Helmuth’s sensitivity to the Spirit, even after months of cruel torture and beatings in his prison cell, is illustrated by a comment he made in his letter to a friend the day he died when he penned the following: “I am sorry that I had to break the Word of Wisdom at my last hour.”  He regretted being forced by his Nazi executioners to drink some wine before his beheading.

Schnibbe and Wobbe spent three years together in a German labor camp, where they suffered beatings and starvation.  They spent freezing winter months wading in water up to their thighs as they dug in peat bogs.  Schnibbe was released early and drafted into the German Army just weeks before the war ended and was forced to march with the army to Russia. He was then taken prisoner by the Soviets and held as a prisoner of war in Russia for four more years. He did not return to Germany until 1949.  When he returned home, his mother did not recognize him. He weighed a mere 95 pounds on his 6 ft 2 inch frame; a walking skeleton.

Both Karl Schnibbe and Rudi Wobbe immigrated to Utah in the early 1950s, together with Hubener’s two half-brothers.  Wobbe later credited the teachings of the Church and good parents as reasons the boys displayed such courage to take their stand and risk their all for the cause of truth.

We can certainly be proud of these three Mormon teenagers who had the courage and integrity to stand up against Hitler and his cruel policies in spite of the obvious dangers! After the war ended, Helmuth was recognized as a martyr for his resistance against the Nazi regime.  Among many efforts taken to preserve the memory of the young hero was the establishment of the Helmuth Hubener Haus in Hamburg.

A play depicting the struggle of Hubener and his friends in a totalitarian regime was written and produced by BYU Professor Thomas Rogers.

The story of the brave young resistance group has been portrayed in German and English publications, including separate book accounts published in Utah by Rudi Wobbee and by Karl-Heinz Schnibbe.  An hour documentary premiered on BYU Television entitled, Truth and Conviction. Additionally, Gunter Grass, one of Germany’s most well known intellectuals, has included Hubener’s resistance activities in his writings.  In 1985, Schnibbe was honored by the German Government as a resistance fighter, a year after he wrote his book about his experiences, The Price: The True Story of a Mormon Who Defied Hitler.  Another major motion picture based on the Hubener Group, Truth & Treason, is in production.

Schnibbe died in Salt Lake City at age 86 in May 2010. Schnibbe spent the last 18 years of his life as a temple worker in the Salt Lake Temple, where he had worked for many years as a painter and craftsman. Wobbe died of cancer in 1992 after writing his award winning book, Three Against Hitler.

We certainly cannot judge those who remained silent in Germany or opposed the efforts of these three brave LDS young men.  The pressures to support the German government before and during the war were enormous, the propaganda spread by the Nazis was compelling, and the risks of showing any signs of rebellion were swift and terrifying.  Only God can judge the local branch president who mistakenly excommunicated young Helmuth after his arrest.  Fortunately the Church leaders in Salt Lake posthumously reinstated Helmuth in 1946, shortly after the war ended, for the mistaken excommunication that did not follow proper procedure.

The young teenagers going into the mission field in our day also show tremendous courage and bravery to leave family and friends behind to face unknown languages, people and cultures near and far.  They too must be brave and not hesitate to open their mouths to spread the beautiful truths of the restored Gospel. May we never forget the price of freedom and be grateful and supportive of the thousands who sacrifice so much to spread the cause of truth throughout the world.  Perhaps when a young missionary hesitates or is frightened to share the gospel message, recalling the bravery of Helmuth and his friends will be a strong incentive to speak up and preach the Gospel.

Although the church had told the members to conform to the Nazi regime, anyone who had truly read and studied the Book of Mormon should have known full well what tyranny truly was. This story is yet another prime example of how so many members seek the praise of the world, and in doing so, allow so much evil to fester in the process. When the day comes in the United States, when the heathen and degenerate secret combine that currently runs this nation demands an oath of allegiance, it will be interesting to see just how many members of the church, as well as the secular Christian world will go along with it. It is painful to see how Satan has perverted the meanings of the articles of faith, as well as sections in the Bible, such as Romans 13, to where members do not question anything. If there is any doubt to what I am saying, all one has to do is look at captin Moroni as an example. We tolerate so much from government now as it is, I don't believe people will put up much resistance to even more tyranny.

I, too was excited to hear that the missionary ages were moved down. Hubener's story is also a very touching one. But I feel the need to point out where the church was when this courageous youth was facing death. The church had announced before this incident that the people of Germany were to be upstanding citizens. In other words, the church told them to conform to the Nazi regime. The boys did not. In the days before the execution, Helmuth was excommunicated from the LDS church. Only after his death did they reinstate his membership saying it was a mistake. I am a proud member but it is still important to give the full story to honor those that it is about.