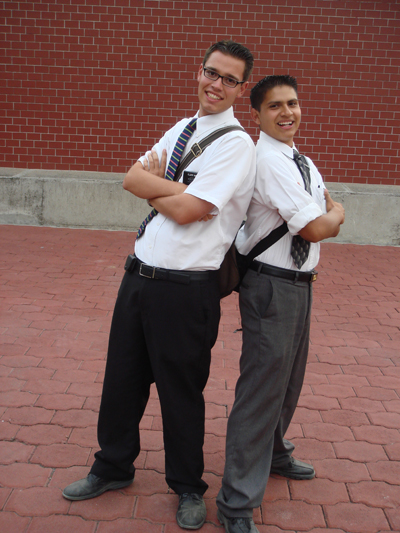 I have enjoyed following the missionary miracles from around the world in Meridian, and wanted to share with you one of my own. Several years ago, I was serving in the Mexico, Mexico City South Mission, under the direction of President Gary Doxey, now of the Seventy. My companion at the time was Elder Fernando Lopez from Tijuana, Mexico.

One day we received a referral from the mission office to visit a home in San Matias Cuijingo, located about an hour away by bus.  Although we lived in Tepetlixpa, Estado de Mexico, just outside of Mexico City, we were the closest missionaries to San Matias (population fewer than 10,000), which had been closed to missionary work for some time.

Several days after receiving the referral, we excitedly boarded a bus which took us from our town of Tepetlixpa to the nearby town of San Matias, some 50 miles away.  When we arrived, we started to walk through the small village looking for the referral address we had received from our mission office.

As the first missionaries to wander through the town in years, we apparently stood out, because after a few minutes a local police officer pulled his car over to come talk to us.  He explained that we should immediately turn around and take the bus back to where we had come from, as this was a dangerous place for foreigners, especially missionaries.  He told us that the last LDS missionaries had been run out of down by angry locals several years previous.  We politely thanked him for the warning, and assured him we would leave as soon as we had visited the home of our referral.  We were on the Lord’s errand and felt confident that Heaven would protect us.

When we finally located the correct address, we were disappointed when a woman told us that the person we were looking for no longer lived there. We asked if she knew of anyone who might be interested in hearing our message.  She pointed to a home further down the street with a bright green aluminum gate blocking the entrance to the front yard.  We thanked her and started walking down the somewhat deserted street.

By this time, it was around noon. A construction crew worked on a building across the street and took their lunch break.  They noticed us walking down the quiet street.  We quickly noticed that they all appeared to be drinking alcoholic beverages of various types and seemed to be a rowdy bunch looking for trouble.  We grew concerned when about 7 of them approached us and formed a semi-circle around us at the wall with the green aluminum gate.  We knocked but it quickly became evident that no one was home to let us inside.  We turned to face our drunken group of construction workers.

They sarcastically asked if we would drink some beer with them.  We replied that we didn’t drink, that we were missionaries from the Mormon Church. The workers grew more irritated the more we resisted their repeated entreaties to drink.  One of the men pointed out that Jesus had his disciples drink with him from the cup. He then held out a cup with some beer in it for us to partake.  I responded that when Jesus said that he did not mean that cup or that drink, and that we did not consume alcohol because it was against our religion.  This just seemed to make matters worse. As the angry men started to close in on us, it was apparent that they wanted to fight and beat us up for some afternoon entertainment.  I said a silent prayer and braced for the first blow, knowing we had no chance to escape the men that had us pinned up against the wall. We were left with no escape.

Suddenly the men all looked up above us in the air and stopped in their tracks.  A look of terror fell on their faces and they quickly retreated back across the street to their construction project and returned to work.  The man who appeared to be their leader humbly gave us a quick handshake and sincerely apologized for giving us a bad time and then he also left us alone and returned to his work site.

My companion and I looked up in the air above us and behind us to see what had frightened the drunken construction workers into abandoning their plans so suddenly.  Whatever or whoever had appeared above us in the air was gone.  We did not see what or who the Lord had sent to protect us that day in Mexico while we were on the Lord’s errand. I can only imagine and speculate who was standing above us in the air.  We were doing what we were supposed to be doing and following the mission rules. I can only assume that the Lord sent an angel to intervene, and the veil was lifted for our attackers just long enough to have the intended purpose of protecting us. We quickly returned to the bus stop and departed back to our home town.

Since that special experience several years ago, I have often thought of Elisha the prophet who was surrounded by a large Syrian army determined to kill him. He reassured his worried companion, who anxiously counted the Syrian soldiers, that when we are on the Lord’s side, regardless of their numbers or worldly power, we are in the majority. I testify that the consoling words of Elisha to his young friend are still true today: “They that be with us are more than they that be with them.” (2 Kings 6:16).