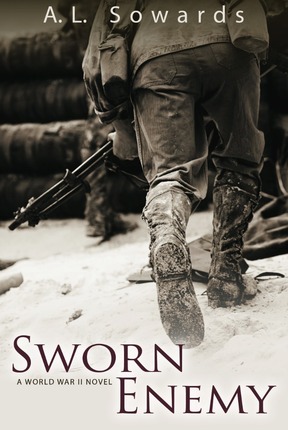 Peter Eddy, an American lieutenant, is behind enemy lines in France following a secret mission and must make it back to the allied side. With him is his dead contact’s sister, Genevieve, who also needs to reach the protection of the allies. Sworn Enemy by A.L. Sowards begins in the thick of danger and suspense. Though the second book in a pair of World War II novels, this volume could easily stand alone. The first, Espionage, is a satisfying thriller as well and no one will be disappointed if they go back and read it first, though this second volume is a satisfying read on its own.

Once Genevieve and Peter reach England, they are both aware of strong feelings for the other, but there is a war on, lives in danger, and missions they feel compelled to accept and complete before they can pursue their own happiness. Thinking Genevieve is safe in England beginning nursing studies, Peter along with a handpicked team of specialists are transported to the eastern front where it is difficult to know who is a friend and who is an enemy. The people in this region have reason to fear Communist Russia as greatly as they do the Nazis. Something isn’t right and Peter begins to suspect there’s a double agent on their team who will stop at nothing to ensure their failure.

Even though Genevieve knows the Gestapo is still looking for her in France, she feels compelled to slip into the dangerous role of a French spy once more. Even when her efforts appear futile, she continues to sabotage the efforts of those who have invaded her homeland. She finds herself drawing on the budding faith she learned from Peter as tensions tighten, she’s thrown in a German prison, and she must once more face the prospect of death and dishonor.

Peter and Genevieve are appealing characters and though we see growth in their characters and can’t help admiring their courage and determination, this isn’t a character study kind of novel. There is a romantic element to their relationship, but the romance is pretty low key. We know only enough about them to care about them and their mission. The emphasis in Sworn Enemy is on the action and there’s plenty of that. The reader is shown the incredible risks undercover and resistance fighters took during World War II and the importance they placed on freedom and loyalty to their countries. Sowards shows the conflicting loyalties of Eastern Europeans such as those in Romania, Poland, and Czechoslovakia. No matter which way the war ended, they faced a cruel future as it became apparent that if the Nazis lost, Russia would take control. Either way, the people of these countries would lose their freedom.

Sowards was born in Atlanta, Georgia, but grew up in Moses Lake Washington. She came to Utah to attend school at BYU and ended up staying. She swam competitively in high school and for BYU. She and her husband are the parents of twin toddlers. This is her second published novel.