Science and the Book of Genesis Part 2 | Meridian Magazine

Science and the Book of Genesis Part 2

Editor’s Note: This is the next installment of an extended version of a presentation given at the 2013 Interpreter Symposium on Science and Mormonism: Cosmos, Earth, and Manat the Utah Valley Convention Center, Provo, Utah. Jeff and David Larsen have just completed a detailed scriptural commentary on the stories of Enoch, Noah, and the Tower of Babel. See www.templethemes.net for more details.

Lesson Two: Scripture is a Product of a Particular Point of View

Lesson 2: scripture is a product of a particular point of view.

The Latter-day Saints, [like other Bible readers,] are constantly converting statements of limited application to universal or at least sweeping generalities. To illustrate, I was told as a child that the Rocky Mountains, the Appalachians, and the Andes all came into existence overnight during the great upheavals of nature that took place at the time of the Crucifixion – an absurdity that plays into the hands of critics of the Book of Mormon. But what we find in the 3 Nephi account when we read it carefully is a few sober, factual, eyewitness reports describing an earthquake of 8-plus on the Richter scale in a very limited area. Things that appear unlikely, impossible, or paradoxical from one point of view often make perfectly good sense from another. 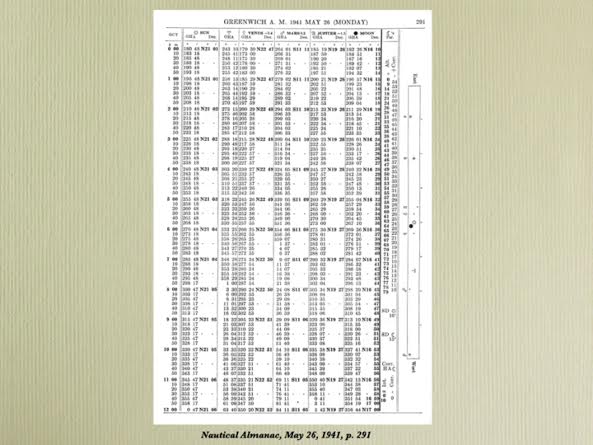 The Nautical Almanac gives the exact time of sunrise and sunset for every time of the year, yet astronauts know that the sun neither rises nor sets except from a particular point of view, the time of the event being strictly dependent on the exact location. From that point of view and that only, it is strictly correct and scientific to say that the sun does rise and set. Just so, the apparently strange and extravagant phenomena described in the scriptures are often correct descriptions of what would have appeared to a person in a particular situation … 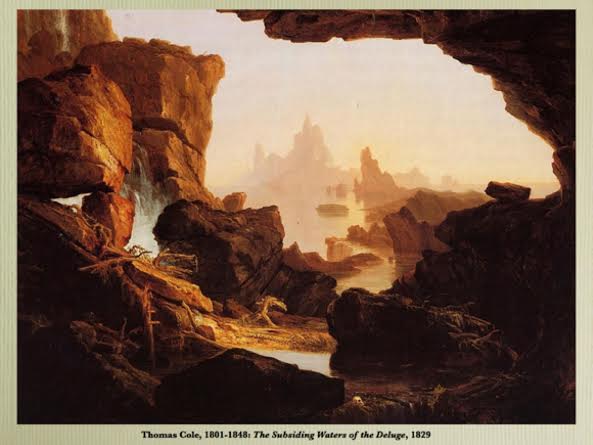 So with Noah in the Ark. From where he was, “the whole earth”[2] was covered with water as far as he could see … But what were conditions in other parts of the world? If Noah knew that, he would not have sent forth messenger birds to explore.

But doesn’t Genesis 7:19 say that “the waters prevailed exceedingly upon the earth; and all the high hills, that were under the whole heaven, were covered”? Explaining his understanding of this verse, Walter Bradley observes:[3]

The Hebrew word eretz used in Genesis 7:19 is usually translated “earth” or “world” but does not generally refer to the entire planet. Depending on the context, it is often translated “country” or “land” to make this clear … [For example,i]n Genesis 12:1, Abram was told to leave his eretz. He was obviously not told to leave the planet but rather to leave his country… [Another] comparison to obtain a proper interpretation of Genesis 7:19 involves Deuteronomy 2:25, which talks about all the nations “under the heavens” being fearful of the Israelites. Obviously, all nations “under the heavens” was not intended to mean all on planet Earth.

Elder John A. Widtsoe, writing in 1943, summed up the important idea of taking point of view into account when interpreting scripture:[4]

We should remember that when inspired writers deal with historical incidents they relate that which they have seen or that which may have been told them, unless indeed the past is opened to them by revelation.

[For example, t]he details in the story of the Flood are undoubtedly drawn from the experiences of the writer … The writer of Genesis made a faithful report of the facts known to him concerning the Flood. In other localities the depth of the water might have been more or less.

An additional area where point-of-view comes into prominent play is in consideration of the authorship of the Old Testament. An impressive array of evidences for the seeming heterogeneity of sources within the first five books of the Bible have converged to form the basis of the Documentary Hypothesis, a broad scholarly consensus whose most able popular expositor has been Richard Friedman.[5] However, even those who find the Documentary Hypothesis – or some variant of it[6] – compelling have good reason to admire the resulting literary product on its own terms. For example, in the case of the two Creation chapters, Friedman himself writes that in the scriptural version of Genesis we have a text “that is greater than the sum of its parts.”[7] Sailhamer aptly summarizes the situation when he writes that “Genesis is characterized by both an easily discernible unity and a noticeable lack of uniformity.”[8]

The idea that a series of individuals may have had a hand in the authorship and redaction of Genesis should not be foreign to readers of the Book of Mormon, where inspired editors have described explicitly the process by which they wove separate, overlapping records into the finished scriptural narrative. However, in contrast to the carefully controlled prophetic redaction of the Book of Mormon, we do not know how much of the editing of the Old Testament may have taken place with less inspiration and authority. Joseph Smith wrote: “I believe the Bible as it read when it came from the pen of the original writers. Ignorant translators, careless transcribers, or designing and corrupt priests have committed many errors.”[9]

Bokovoy, David E. “‘The book which thou shalt write’: Higher criticism and the book of Moses.” Presented at the The Expanded Canon: Perspectives on Mormonism and Sacred Texts, Orem, UT: Utah Valley University, April 5, 2013.  (accessed September 11, 2013).

Bradley, Walter. “Why I believe the Bible is scientifically reliable.” In Why I Am a Christian: Leading Thinkers Explain Why They Believe, edited by Norman L. Geisler and Paul K. Hoffman, 161-81. Grand Rapids, MI: Baker Books, 2001.

Gertz, Jan Christian. “The formation of the primeval history.” In The Book of Genesis: Composition, Reception, and Interpretation, edited by Craig A.

[6] Although broad agreement persists on many issues of longstanding consensus, the state of research on the composition of the Pentateuch continues to evolve in important ways. In 2012, Konrad Schmid gave the following assessment (K. Schmid, Genesis, pp. 28-29):

[6]Pentateuchal scholarship has changed dramatically in the last three decades, at least when seen in a global perspective. The confidence of earlier assumptions about the formation of the Pentateuch no longer exists, a situation that might be lamented but that also opens up new and – at least in the view of some scholars – potentially more adequate paths to understand its composition. One of the main results of the new situation is that neither traditional nor newer theories can be taken as the accepted starting point of analysis; rather, they are, at most possible ends.

[6]With respect to Genesis in particular, “it is fairly obvious that the book of Genesis serves as a kind of introduction or prologue to what follows in Exodus through Deuteronomy” (ibid., p. 29). “Nevertheless,” continues Schmid in his highlighting of one prominent theme in the most recent thinking on the topic (ibid., pp. 30, 32, 45), “the function of Genesis to the Pentateuch is apparently not exhausted by describing it as an introduction to the Moses story …. Genesis … shows … clear signs of having existed as a stand-alone literary unit for some portion of its literary growth. Genesis is a special book within the Pentateuch: it is the most self-sufficient one …. In current scholarship, it is no longer possible to explain the composition of the book of Genesis from the outset within the framework of the Documentary Hypothesis.” For a broader survey of current research, see J. C. Gertz, Formation. For details of textual transmission and reception history of Genesis in Judaism, Christianity, and Islam, see C. A. Evans et al., Book of Genesis, pp. 303-632.

If the Garden of Eden was in or around Jackson County, Missouri, then the City of Enoch was also in that vicinity, and Noah lived in that region as well. The Bible says nothing about how widespread mankind was by Noah's era. Were they living in both North and South America? What about Africa, Asia and Europe? Australia and New Zealand? What did Noah know about people in parts of the earth that were thousands of miles away from him? Did he have airplanes and satellite communications that let him know the behavior of people on all parts of the earth? How exactly did people over the entire globe know enough about the Plan of Salvation to be held accountable in such a dire way for rejecting it? Most of the people of the world today are still so ignorant about Christ that they could hardly be condemned to death for disobedience to God's law. How many of Noah's contemporaries could be held accountable for rejecting his testimony, unless he preached to them in person? And how many of earth's people could he reach? I don't see any reason in Genesis to believe Noah circumnavigated the globe to preach to the wicked so they could be justly condemned to drown. I think the story of the Jaredites and their journey to the Americas is a conscious reflection of the Noah experience, in reverse. Their vessels were similar to his in design, and according to rabbinic tradition were lit the same way as Noah's ark, by shining stones. I think Noah's story is like that of the Jaredites, who sailed halfway around the world during a year voyage to leave the wicked behind. Noah did the same journey in reverse. Noah's horizon was much closer in size to the region where the Book of Mormon played out, or to the Middle East. You can "cover" the mountains with an inch of rainfall, without having to inundate the lowlands under a five mile deep ocean. The simile of "baptizing the earth" has to have limits. The earth was not immersed in a giant sphere of water. It has no nose to hold, no hands or feet, and no one held their right arm to the square and pronounced the baptismal prayer before plunging the whole earth under water. If anything, it was like a baptism by sprinkling. We should not get carried away with the simile. We al, have images in our minds that were created from paintings and storybooks and cartoons, as distinct from actually reading what Genesis says. I think it is far more likely that Noah's story is the story of how the lineage bearing the priesthood migrated over the oceans to the Old World, just as the stories of Jared and Lehi speak of similar voyages in the opposite direction, with destruction of the wicked but not their obliteration.

I am enjoying reading your scientist series and your informed in depth insights about the flood. To those who don't agree with you, perhaps reading The apostle Paul's discourse in 1 Corinthians would further serve to see your point of view. chapter 13:8 Charity never faileth: but whether there be prophecies, they shall fail; whether there be tongues, they shall cease; whether there be knowledge, it shall vanish away. 9 For we know in part, and we prophesy in part. 10 But when that which is perfect is come, then that which is in part shall be done away. 11 When I was a child, I spake as a child, I understood as a child, I thought as a child: but when I became a man, I put away childish things. 12 For now we see through a glass, darkly; but then face to face: now I know in part; but then shall I know even as also I am known.