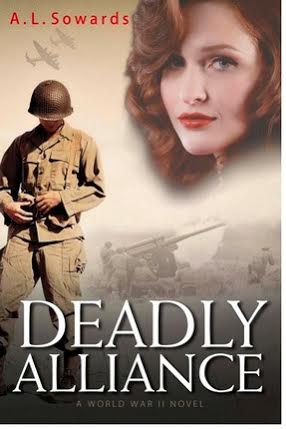 A. L. Sowards has written three novels set in World War II. Espionage and Sworn Enemy are both excellent books, but the final book in the trilogy, Deadly Alliance, is even better. Each of the books can easily stand alone, so if you can read only one of the volumes, make it Deadly Alliance.

Lieutenant Peter Eddy, his small commando team, two civilians, and one small child make it out of Nazi occupied territory into Italy, but they’re not as safe as they should be. They’ve angered a British major who is also a communist and who doesn’t want certain information the group has gleaned to interfere with communist and Soviet plans. He forces Peter and his men to accept a suicide mission into Bosnia.

Peter agrees to be parachuted into Bosnia in exchange for the woman he loves, Genevieve, who is also an OSS agent, to not be sent back into Germany where she would be captured and killed. His radio operator is dragged from the hospital where he is being treated for a gunshot wound and promised the woman he loves, Ionescus, and her little boy will be sent to England if he goes. If he doesn’t go, they’ll be sent back to Yugoslavia and a sure death sentence. Sabotaged parachutes and a drop nearly eighty miles from their target confirm their suspicions someone doesn’t want them to survive the mission.

Promises are broken and both women find themselves in serious trouble. Injuries, faulty equipment, the communist plan to wrest the Serbo-Croatian lands from Germany before western armies arrive, and a country caught up in a civil war, as well as the war with Germany, creates dangerous dynamics and diverse problems. Genevieve’s assignment as a courier escalates into a dangerous race to outwit a fascist assassin and Ionescus and her little boy are sent to an island prison notorious for the short time prisoners stay alive there.

Most people have some familiarity with World War II from stories we’ve heard concerning England, America, Canada, Western Europe and even Russia, but the chaotic and brutal portion of the war involving Eastern Europe is not as well known to most of us. Sowards has researched the background and events of the last year of the war in great detail and brings it to life in sharp detail and vivid color.

The major characters in this story are not so much heroic as simply real, people who do heroic things because they must. They have weaknesses and faults, but they are committed to life and their various countries. They’re self-sacrificing because of their total trust in each other. They’ve done hard things, but they continue to grow, trust in God, and give total love to each other. Even the minor characters are drawn well and elicit understanding of their motivations.

This tightly written, realistic novel will be enjoyed by men and women alike of all ages. The intense action will appeal to action oriented readers, while those who enjoy tender stories will be moved by the strong emotions and sacrifices these characters vividly portray.

A.L. Sowards grew up in Moses Lake, Washington, then went to Brigham Young University. After graduating, she her husband, and children have made their home in Utah.

DEADLY ALLIANCE by A.L. Sowards, published by Covenant Comunications, 314 pages, soft cover, $13 in paperback, and $10 on Kindle. It also available on CD.

Another Big Lie, This Time About the Supreme Court

By Christopher D. Cunningham
PAST ISSUES