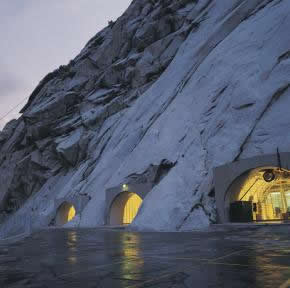 A massive excavation carved 700 feet into a solid granite mountain near Salt Lake City houses millions of feet of microfilm – all historical documents The Church of Jesus Christ of Latter-day Saints has been keeping since 1938. The records are being digitized and published through FamilySearch, a genealogical resource provided free to the public.

The Granite Mountain Records Vault is the official storage unit for 2.4 million rolls of microfilm containing approximately 3.5 billion images. The information links to billions of people in over 100 countries and is recorded in 170 languages.

Information on the films is currently being digitized by use of complex computer programs which adjust for density variations in each film. The enormous collection of secured documents: unpublished records from churches and governments, parish registries, passenger lists, birth certificates, censuses, deeds, wills, family, town and county histories and even maps, requires just over 15 minutes to convert a whole microfilm into a digital file. Eventually the vast majority of the collection will be available for online research.

Not only does the Church make such vital, historical information available to genealogy researchers, but it returns a copy of the filmed records to the record custodian. In 2004, for example, a cyclone struck the tiny South Pacific island of Niue, destroying all local birth, death and court records. FamilySearch had filmed the records sometime prior for the archivist of Niue. FamilySearch was able to provide a copy of the original records to the storm-ravaged island.

“Restoring the records of the past is one part of helping this island rebuild and look to the future,” said Jay Verkler, CEO of FamilySearch.

Maintaining a records collection of such volume requires carefully controlled procedures. The vault, a total of some 65,000 square feet, operates at 55 degrees, 35 percent humidity and with a circulating fresh air system that minimizes dust. Under such conditions the vast collection can be protected against deterioration, natural disasters or man-made calamities.

Organized searching for valued records worldwide began with the 1894 establishment of the Genealogical Society of Utah, a nonprofit group founded by the Church. “Rather than expecting people to travel to original record sources, the Church organized teams to bring copies of the records back to the genealogical researchers,” Verkler explained. “Sometimes the Church copies are the only existing copies of these valuable archival records.”

Record collections continued but were expedited by the development of microfilm technology in the 1930s. A rapidly expanding collection of films, over 100,000 by the early 1950s, prodded Church leaders to create a permanent storage facility. After considering several Salt Lake City locations, the leaders settled on a location in the surrounding hillside, where a slab of solid granite was located in the mountainside nearby. Granite from that location was quarried for both the Salt Lake Temple and later the Church’s Salt Lake City Conference Center.

Construction of the vault began in 1958 and was generally completed by 1963 and considered completely operational in 1965. The site includes a network of storage rooms containing walls of steel cabinets ten feet high. A separate section houses office spaces, shipping docks and microfilm processing stations.

“Preservation and protection of the world’s valuable records has been a longtime goal of the Church,” Verkler added. “Storing the records in the mountain vault where it is already cold provides the perfect facility for safekeeping.” Such a facility provides evidence of the Church’s commitment to not only collecting, but making the collections available to researchers worldwide. Archivists can offer microfilm or digital copies of the records to their reading room patrons without damage to the original vital records.

The genealogical world recognizes the Church as a longtime resource in their work, and in that sense, they think of the vault as a bit of an icon, an icon of protection to these important and accessible records.