Adam and Christ, Eve and Mary at Christmas Time

Carols of the Fall and the Redemption 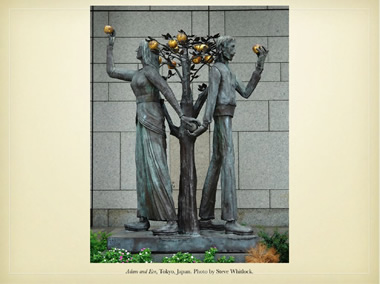 Though the event is rarely mentioned in modern Christmas celebrations, traditional carols often give as much attention to the Fall of Adam as they do to the birth and redemption of Christ. For example, after describing the creation of Adam and Eve, the English carol “This is the truth sent from above”1 continues:

3. Then after that ’twas God’s own choice
To place them both in paradise
There to remain from evil free
Except they ate of such a tree.

4. But they did eat, which was a sin,
And thus their ruin did begin-
Ruined themselves, both you and me,
And all of our posterity.

5. Thus we were heirs to endless woes
Till God the Lord did interpose
And so a promise soon did run:
That he’d redeem us by his Son.

Though, of course, Latter-day Saints have a much more positive view of the Fall and reject the traditional conception of “original sin,” such carols can still help us to humbly experience the spirit of gratitude for our redemption through Christ that is shared by all Christians.

The Bond of Adam

The first line of a fifteenth-century Christmas carol reads: “Adam lay ybounden / Bounden in a bond.”2 The imagery of a “bond” comes as part of a long Christian tradition of stories about a series of unsuccessful attempts of Satan to deceive Adam and Eve, who become increasingly immune to his wiles through the knowledge and protective power provided by angelic teachings, covenants, and ordinances.One particular episode, the story of the cheirograph [i.e., contract, from Greek cheiro (hand) + graph (writing)] is illustrated at left above. At right is an illustration from Elder Boyd K. Packer’s story, The Mediator, which echoes some similar themes.3

The story of the Cheirograph begins when the Devil claims ownership of the earth and accuses Adam of trespassing. In the image, part of the unique iconographical programme of four churches in North Moldavia, the robed Adam kneels before the naked Satan and “dutifully signs a bond of indebtedness that deeds over to [the ‘Lord of the Earth’ himself and] all his offspring.”4 Satan’s plan fails, of course, because-as Adam knows-God is the true “Lord of the earth.”5

A related sense of cheirograph is found in Colossians 2:14, where the Greek term should be translated “‘bond’ or ‘bill of indebtedness’ but not ‘contract.’ The text does not mention Satan or Adam and seems to say that at the Crucifixion, Christ erased the bill of indebtedness that humans had incurred by sinning and nailed it to the Cross.”6 In other words, just as in Roman times cancelled bills were nailed up for display to publicly announce that the charges had been paid, so Christ was nailed to the cross to make it known to all that He had satisfied mankind’s debt of sin.

Symbolically, the handwritten bond of justice was annulled by the “writing” of the nails in the pierced hands of the Savior-Christ’s cheirograph of mercy. Likewise, the contractual cheirograph, portrayed in pseudepigraphal accounts as having been unscrupulously procured by Satan from Adam and his posterity, will hold no sway over the righteous who fully accept and qualify for the covenants required of them by the redeeming Lord, who provided Himself as a substitutionary sacrifice.7 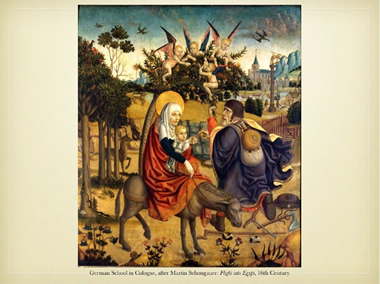 Another traditional carol, called “The Cherry Tree,”8 describes an incident that is supposed to have occurred during Joseph and Mary’s journey to Bethlehem. The illustration shows a group of angels above the couple, bending down the trunk of a fruit tree and plucking its fruit:

3. Joseph and Mary walked through an orchard good,
Where was cherries and berries, so read as any blood.

5. O then bespoke Mary, so meek and so mild:
“Pluck me a cherry, Joseph; they run so in my mind.

6. O then bespoke Joseph, with words most reviled:
“Let him pluck thee a cherry that brought thee with child.”

7. O then bespoke Jesus, all in his mother’s womb:
“Bow down, then, thou tallest tree, for my mother to have some!”

The lesson of this fanciful story is clear: Joseph (and any contemporary hearers of this carol) are to quell any doubts they may have about the divine patrimony of Jesus. In its obedience to the not-yet-born Jesus, the cherry tree becomes nature’s witness to innocence and purity of His mother.

The image of the orchard offering its fruit to Mary becomes even more fitting in light of evidence that the branch from which she plucks belongs to no ordinary tree. Symbolically, it is the Tree of Life,9 with the original palm tree having been changed to a cherry tree.10 Mary, as the new and perfect “Eve,” is being shown as worthy to partake of the Tree of Life.

It is true that Adam and Eve’s departure from the Garden of Eden barred them and their posterity from the Tree of Life. However, a rabbinic tradition has it that the last divine word that rang in the ears of Adam and Eve as they left the Garden of Eden was tashub, meaning “You shall return!”11 At last, when men and women are fully prepared, they will be able to truly “stand in holy places and be not moved.”12

The Return of Jesus Christ

It is the testimony of scripture that as surely as Jesus came once as a babe in Bethlehem, He shall come again a second time to the earth.13 Hence, just as Latter-day Saints at Easter time add the symbol of the empty tomb to that of the cross, so at Christmas time, we should not think it inappropriate to hang a painting of his coming in glory next to the manger scene. When we carol, let us sing not only Silent Night, but also The Day Dawn is Breaking; to O Come All Ye Faithful let us add Come O Thou King of Kings; with I Wonder as I Wander, we should sing I Wonder When He Comes Again.

The New Oxford Book of Carols. Oxford, England: Oxford University Press, 1994.
Kierkegaard, Soren. Parables of Kierkegaard. Edited by Thomas C. Oden. Princeton, NJ: Princeton University Press, 1978.
LaCocque, André. The Trial of Innocence: Adam, Eve, and the Yahwist. Eugene, OR: Cascade Books, 2006.
Madsen, Truman G. “The suffering servant.” In The Redeemer: Reflections on the Life and Teachings of Jesus the Christ, 223-48. Salt Lake City, UT: Deseret Book, 2000.
Malan, Solomon Caesar, ed. The Book of Adam and Eve: Also Called The Conflict of Adam and Eve with Satan: A Book of the Early Eastern Church. Translated from the Ethiopic, with Notes from the Kufale, Talmud, Midrashim, and Other Eastern Works. London, England: Williams and Norgate, 1882. Reprint, San Diego, CA: The Book Tree, 2005.
Mika’el, Isaac,  son of Bakhayla. ca. 1400. “Discourse concerning the mystery of the Godhead and the Trinity.” In The Book of the Mysteries of the Heavens and the Earth and Other Works of Bakhayla Mika’el (Zosimas), edited by E. A. Wallis Budge, 126-39. Oxford, England: Oxford University Press, 1934. Reprint, Berwick, ME: Ibis Press, 2004.
Packer, Boyd K. “The Mediator.” Ensign 7, May 1977, 54-55.
Robinson, Stephen E. Believing Christ. Salt Lake City, UT: Deseret Book, 1992.
Stone, Michael E. “The legend of the cheirograph of Adam.” In Literature on Adam and Eve: Collected Essays, edited by Gary A. Anderson, Michael E. Stone and Johannes Tromp, 149-66. Leiden, Netherlands: Brill, 2000.
—. Adam’s Contract with Satan: The Legend of the Cheirograph of Adam. Bloomington, IN: Indiana University Press, 2002.
Zornberg, Avivah Gottlieb. Genesis: The Beginning of Desire. Philadelphia, PA: Jewish Publication Society, 1995.

3          B. K. Packer, Mediator 1977. The Mediator is concerned, not with a tale about Satan’s fraud in claiming ownership of the earth, but rather with the dilemma of trying to reconcile the strict demands of justice with mankind’s need for mercy. Though the subject of the story represents, like Adam, an “Everyman,” his antagonist is not the Devil but rather an unyielding creditor who demands that the terms of the contract for repayment of a loan be fully satisfied, despite the entreaties of his client for mercy.

10           The story is clearly derived from Pseudo-Matthew where we read:
On the third day of their journey, whilst they were walking, the blessed Mary was tired by the excessive heat of the sun in the desert. On seeing a palm tree, she said to Joseph, “Let me rest here a little under the shade of this tree.’ Joseph therefore quickly led her to the palm, and helped her dismount from her beast. As the blessed Mary was sitting there, she looked up to the foliage of the palm and saw that it was full of fruit, and she said to Joseph, ‘I wish that it were possible to get some of the fruit of this palm.’ Joseph said to her, ‘Why do you say that when you can see how high the palm tree is’. Then the child Jesus, with a joyful countenance and resting on his mother’s lap, said to the palm: ‘O tree, bend your branches and refresh my mother with your fruit'” (J. K. Elliott, Synopsis, Pseudo-Matthew, 20, pp. 114).
Like the version of the account found in Qur’an 19:22, the event in the carol “has been transposed from the post-natal flight into Egypt to the pre-natal journey to Bethlehem, with Christ effecting the miracle from within his mother’s womb” (H. Keyte et al., New Oxford, p. 444). For the story of how the transformation from palm tree to cherry tree took place, see S. T. Carr, Cherry Tree. There are also borrowings from the Protoevangelion of James, where Joseph is depicted as having doubted the child’s paternity (J. K. Elliott, Synopsis, Protoevangelion of James, 13:1-14:1, pp. 43-44). “In the ballad [of the cherry tree] this jealousy is presented with a clever use of dramatic irony, since his waspish ‘Let him pluck thee a cherry that brought thee with child’ is followed by their immediate provision by the unborn Christ, who in theological terms [current at that time] is not to be differentiated from the Creator God who had indeed got Mary with child by the Holy Ghost” (H. Keyte et al., New Oxford, p. 445).

13         If it is hard for moderns to believe in the literality of Jesus’ divine birth, it is even more difficult to take seriously the reality of His return, as the following parable from the great Danish Christian, Søren Kierkegaard, illustrates:
“It happened that a fire broke out backstage in a theater. The clown came out to inform the public. They thought it was just a jest and applauded. He repeated his warning, they shouted even louder. So I think the world will come to an end amid general applause from all the wits, who believe that it is a joke” (S. Kierkegaard, Parables, p. 3)