A Brain Gone Wrong. The Brain Believes What You Tell It | Meridian Magazine

A Brain Gone Wrong. The Brain Believes What You Tell It 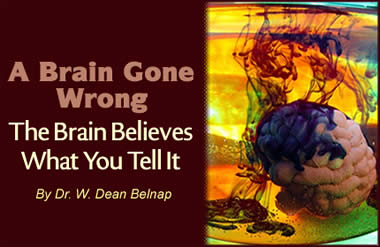 “Man is that he might have joy” is not a platitude of some day, somewhere, some time.  Joy is a “heart condition” that is manifested by the brain.  It is the imprinting of vitality and fulfillment and mastery on the brain.

Imagine a life that does not give in to barriers, hassles and hurdles of everyday living.  One filled with achievement, enrichment, self-fulfillment and satisfaction.  One that can sustain light in a world that is “walking in darkness at noonday.”  Mastering the mind is the key to that light.  A brain that has been imprinted with negative thoughts, patterns and processes can be reconnected to the truth and future it has lost.

The human brain is capable of doing anything we would like it to do.  But, we have to know how to use it and how to treat it.  What we imprint determines what we see, feel, do and like.  If we treat the brain carefully, giving it the right direction, it will do the right thing and work for us in the right way as God intended.  But if we give our highly sophisticated brain the wrong directions, those imprints will develop negative programs that “dumb-down” our potential.  For example, those who are addicted feel and think of nothing but feeding their need; those who have lived with violence and abuse see no other way to survive.

Negative imprints dominate our society.  But, the brains of our youth are still works in progress.  Not only are teens all legs one day and arms and ears the next, the regions of their brains are being developed as well.  Their brains are at work learning how to balance the emotional center of the brain with the judgment of the prefrontal cortex.  A majority of youth are imprinting their brains with negative programs of worldliness and its evils that are not reality.   Yet wrong thinking programs their brains – and ours – year after year, word by word, until our scripts are etched – imprinted – with society’s ills as if they were what we came to do.  So many of our youth are living out the “wrong” picture of themselves that has been created in their minds.  Unfortunately, so are many of their parents.

The result is a disconnect from our eternal selves.

But negative programming can be erased – just like a disk in a computer – and replaced with positive programming that will stay with us and drive our thinking, our feelings and our actions.  The Proverb, “As a man thinketh, so is he,” is absolutely true.  Brain science today reaffirms that truth.

The brain inside a teen is still a work in progress.  Being put in place are the connections between neurons, the transmitters, that join not only emotional skills but also physical and mental abilities.  Time was when society simply tried to pack a teen’s brain with facts and figures from the War of 1812 to the hypotenuse of a triangle to how to jump-start a car.  And in the process of educating, the teen was “done.”

Times and understanding have changed.  Studies of the brain show that the brain through adolescence is maturing in fits and starts.  Raw emotions surface only to be played back by judgment and empathy.  The imbalance is the reflection of imprints not yet cohesive.  In scientific terms, neurons or brain cells “firing” to dendrites of another brain cell.   Moodiness and incoherent behavior are almost standard.  That’s why a teen will pop into a car too crowded for seat belts or worse, being driven by someone who is high on drugs.  The same teen will comfort a child and feel such emotion for a lost puppy.

In the past two decades, science has learned more about the human brain than was known throughout all prior history.  What is clear today is that the brain is an incredibly complex physiological mechanism.  The internal structure of the brain is uniquely human.  The prefrontal cortex is the portion that differentiates us from the animal world.  The limbic system and basal ganglia are centers that initiate emotions.  The limbic system can either enhance the functions of the prefrontal cortex or act independently with the more primitive basal/ganglia that promote and sustain bad habits.

The prefrontal cortex is unique to mankind.  It allows us to make judgments, to process all other brain funcitons and bring balance to our thinking.  The limbic system and basal ganglia are centers that initiate emotions. The limbic system can either enhance the functions of the prefrontal cortex or act independently with the more primitive basal ganglia that promote negative habits.

Within the brain itself, a network of 200 billion neurons, each having a potential of 185,000 electrochemical switches called neuro-transmitters, turns part of us on and part of us off.  The brain’s infinitely small chemical receiving centers respond to almost imperceptible electrochemical signals which deliver nearly immeasurable but highly potent chemical substances to our brain and to other organs which in turn control or affect everything we do.

Through the joint effort of body, brain and mind we become the living results of our own thoughts.  Every action we take, of any kind, is affected by prior programming – imprinting.  A positive set of attitudes, beliefs and behaviors prompts an abundance of self-belief and the moral foundation for our life’s direction.  The same is true for established patterns that follow the darker side of society.  Hence, the prefrontal cortex is what scientists call the “executive” position of the brain.  This area dictates the positive development of the person.  In contrast, the more primitive and self-indulgent parts of the brain can take-over and dictate negative addictive behaviors where no freedom of choice is available.

Fortunately, there is always a programming vocabulary or “inner speech” that can be used to erase and replace the negative imprinting or programming with positive, productive new directions.  That inner speech is a singular human endowment that can be activated or reactivated at any time.

Put simply, the brain believes what you tell it most.  What you tell it about you – what you like, what you do, what you want, what you need – will create you as your brain sees it.  It is what neuroscientists have defined as a “brain-soul” combination manifest by what might be called “inner speech.”

The location and function of inner speech – what we say to ourselves – is found in the prefrontal cortex of the brain.  This exercise of free agency or choice, not found in animals, allows us to make moral and value judgments in one part of the prefrontal lobes of the brain and in another location prompts us to exercise our ability to carry on an inner speech or dialogue patter.  That inner speech is the ingredient that binds all other elements in our process of self-fulfillment.

Sounds complicated.  Not at all.  In our next segment we will discuss the “conversations” of our inner speech and how we direct and redirect those communications.