The Rings That Bound the Gold Plates | Meridian Magazine

The Rings That Bound the Gold Plates

It began as an ordinary morning on San Francisco’s East Bay four years ago. I drove one morning to the local Office-Max stationery store to buy some binders to house a bunch of papers that had become unruly.

Wandering the aisles of the store examining my options my attention was caught by a large sign claiming that binders using “D” shaped rings offered up to 50% more storage capacity than a circular or oval shape. Instantly something clicked in my subconscious and a distant memory surfaced. Somewhere I had read that several of the people who claimed to have actually seen the Book of Mormon gold plates said that they were bound by three rings that were “D” shaped. One eyewitness had even sketched the D shape of the rings. It was an odd fact that I’d filed in my mental basket of puzzles for another day. Suddenly it dawned on me: could I have found the reason the rings were that shape?

The possibility of a connection to this little-known aspect of church history swirled through my mind as I left the store and headed to work. Two nights later I began digging through books and the world of online information. In LDS sources at least four people a century and a half earlier claimed that the gold plates were kept together by three D shaped metallic rings. Understandably, the focus of everyone was on the plates themselves with their mysterious engravings, as the number and shape of the rings seems to have been overlooked by everyone since, including myself. Indeed, most artwork over the years depicting the gold plates of the Book of Mormon has showed oval or circular rings.

The witness who drew the shape of the rings, during an 1877 interview, was David Whitmer, one of the Three Witnesses. He had parted ways with the church many years before, but to his death he defended the reality of the experience he had with three others. He was adamant that both the gold plates he had seen and handled and the angel who presented them in broad daylight were as real as anything in his life had been. 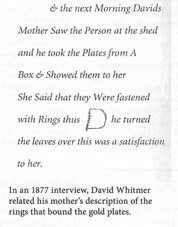 I was soon initiated into the minutiae of storing materials with rings. It transpired that whether a modern loose-leaf binder or an ancient record of metal leaves, the straight side of the D allows the sheets to stack vertically, allowing as much as 50% more capacity than a circular ring and 20-25% more than an oval shaped ring. That in itself was interesting to me. Well then, I thought, obviously this fact was well known; perhaps these people back then had seen ring binders and knew this.

Within two hours of emailing the very efficient curator of the Early Office Museum in London, however, I discovered that ring binders were not put on the market until the end of the nineteenth century, the first patent having been filed in 1859 for a 2 ring binder. Only a few years later 3 ring binders proved more stable and became the standard as a result. And D-shaped ring binders? They were not developed until the 1940’s or 50’s insisted the curator. That, of course, was more than a hundred years too late to have been connected in any way to the Book of Mormon’s coming forth.

Feeling that this was almost too good to be true I continued probing. There were not many descriptions of Joseph Smith’s golden plates to examine, but now I wondered whether there had been any other discoveries of plates bound by metal rings. Because they are not easy to manufacture or to inscribe, metal plates made for record-keeping were not common anywhere in the world and were reserved for only the most important records.

The closest parallel to the Book of Mormon plates is usually said to be the 4th-century BC gold plates discovered in 1933 buried in a stone box in the foundation of King Darius’s temple in Persia, modern-day Iran. They were not, however, bound by rings. Further searching revealed that eight small gold sheets bound by 4 rings had been recently recovered with other items as smuggled goods by a police team near Tehran, but every effort to verify their age and the shape of the rings panned out. Museum archeologists in Great Britain I contacted were skeptical and unwilling to comment, leaving the impression that they may have been modern fakes, probably intended to bring a higher price on the murky international market for antiquities. In any event, their provenance, their original source, was decidedly unclear. 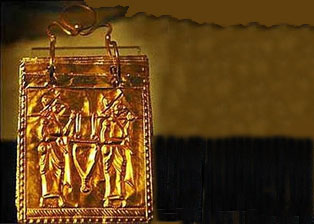 Of all places, Bulgaria in Eastern Europe is currently the best source for an undisputed set of ancient gold plates, unearthed in a field some six decades ago. The six small gold sheets were finely inscribed and were bound by… wait for it… two D-shaped rings. In a neat clincher of sorts, archeologists had dated them to about 600 BC, the same period as the beginning of the main Book of Mormon account. As no-one in Joseph Smith’s day could possibly have known about the Bulgarian plates, or the advantages of the D-shape, this experience became the latest in a list of solid bulls-eyes that demonstrate that the witnesses to the gold plates saw and handled a genuine artifact from the past.

Perhaps it is not too surprising that with something as multi-faceted as a claimed ancient religious record, insights and evidences may turn up at unusual times and unlikely places. This particular little adventure was not the first time that facts supporting some aspect of the Restoration have popped up unexpectedly, nor will it be the last I’m sure.

Joseph Smith in 1842 said of his prophetic calling that he would be eventually proved a true prophet through “circumstantial evidences, in experiments.” From these accumulating circumstantial evidences the pure in heart will be led to seek a spiritual witness from the Book of Mormon’s Author. And those who already have that witness will take their stewardship to build Zion more urgently and seriously.

An earlier version of this information with full references was published by the Neal A. Maxwell Institute for Religious Scholarship at BYU Provo (formerly known as FARMS) and can be accessed at https://maxwellinstitute.byu.edu under the author‘s name at “Authors.”

Appreciation is expressed to Jeff Lindsay of Wisconsin, whose excellent blog often deals with evidences for the truthfulness of the Gospel. Jeff, a patent specialist, uncovered several additional items relating to how and when the D-shaped ring binders came into being. See

Warren Aston is a writer currently based in Brisbane, Australia. He travels extensively pursuing research interests and trying to keep up with his six children and nearly a dozen grandchildren. He is the author, with his former wife, of In the Footsteps of Lehi (Deseret Book, 1994) and many other papers and articles published by the Maxwell Institute at BYU. His book Lehi in Arabia: The Old World Setting of the Book of Mormon is due for release next year.