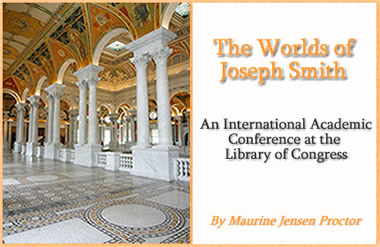 Scholars will gather May 6 and 7 at the Coolidge Auditorium of the Library of Congress to examine the religious, social and theological contributions of Joseph Smith as part of the commemoration of the two hundredth anniversary of his birth.  He was born Dec. 23, 1805.

Called “The Worlds of Joseph Smith,” the symposium will examine Joseph Smith in the world of his own time, his recovery of past worlds, his challenge to the theological world, and his making of a global religion.

Those who would like to listen to the conference have a number of options:

BYU Broadcasting (thanks to Mark Mitchell, Matthew Wheelwright and the Library of Congress) will be streaming the video live from this conference on May 6 and 7th. Those wishing to watch the conference online using Windows Media Player should go to https://byubroadcasting.org/loc/ for information about the webcast and a link to the stream. The conference will also be streamed using Real Media on the Library of Congress site. Very little bandwidth is available here, so only a small audience can be accommodated.  If possible, choose one of the other options listed below to enjoy the conference.

BYU Radio will broadcast the conference live on BYU radio by taking the audio from the webcast. Go to https://byubroadcasting.org/loc/

Tickets are no longer available for this symposium.  However, overflow seating at the Library of Congress will be available, but limited.  Distribution will be handled in this way. No overflow tickets will be distributed in advance. A room adjacent to the Coolidge Auditorium will seat about 80 people, where the conference proceedings will be projected. Numbers will be issued to people as they arrive for each session. As seats become available in the auditorium, people will be ushered by number into the auditorium.

Significance of the Conference

Jack Welch, professor of law at BYU and co-planner of the symposium, told the Deseret Evening News, “Joseph Smith is a towering religious figure.  Perhaps for that very reason he draws a lot of lightning but also channels extraordinary power.  The conference is not aimed at proselytizing or advocating any particular point of view.  It will not involve polemics or propaganda.  Anyone who would be interested in knowing how informed scholars approach the study of Joseph Smith, just as they might study Buddha, Moses, Mohammed, St. Francis or any other major religious leader, will find the outcome of this conference informative, up-to-date, interesting and reliable.”

In fact, that this symposium is sponsored by the Library of Congress, indicates the recognition that Joseph Smith’s contribution to world religion can no longer be dismissed or overlooked.  It is a topic of significant import, worthy of distinguished scholarship, how a religion grew from being a small, persecuted group to becoming a major religion influential in the United States and in the world.

James H. Hutson, chief of the manuscript division of the Library of Congress, noted that other religious persuasions important in American history — such as the Puritans — reached a limit and then their influence receded.  Why this has not happened to the Latter-day Saints will “make the symposium an intellectual feast.”

Speakers and other participants are scholars who participate represent Baylor, BYU, Columbia, Pepperdine and other major universities.  Elder Dallin H. Oaks of the Quorum of the Twelve is scheduled to be the featured speaker.

The idea for this conference marking the bicentennial of Joseph Smith began with a conversation between Robert Millet and Gerald McDermott, who had just been involved with a 300-year academic celebration at the Library of Congress in honor of Jonathan Edwards.

Agreeing that such a conference sounded promising, Millet contacted Val Edwards in the Public Affairs office of The Church of Jesus Christ of Latter-day Saints, to see if such a prospect would appeal to the Church’s plans to commemorate this bicentennial.

Understanding that it might be helpful to involve a high-ranking member of Congress in approaching the administrators of the Library of Congress, Edwards contacted Senator Bob Bennett’s office and an inquiry was initiated.

James Hutson, Director of the Manuscripts division of the Library, was soon involved. He had directed the traveling exhibition from the Library entitled “Religion and the Founding of the American Republic,” which had traveled around the country, showing for three months at Brigham Young University at the time of the Salt Lake City Winter Olympics in 2002. In this connection, Hutson had worked with John Welch, editor of BYU Studies, who hosted this exhibition at BYU together with the Harold B. Lee Library.

Hutson called Millet and they readily agreed that a conference cosponsored by the Library of Congress and Brigham Young University would be of great interest to both parties and to the public in general.

With that encouragement, Millet offered this prospect to the Church. The proposal was accepted and Welch, Richard Bushman and Richard Turley were asked to join Millet and Hutson as members of the organizing committee.