?Lord, whither shall I go that I may obtain ore?? Geologists Discover Iron in Region of Nephi?s Bountiful | Meridian Magazine

?Lord, whither shall I go that I may obtain ore?? Geologists Discover Iron in Region of Nephi?s Bountiful 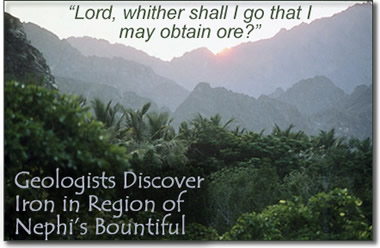 We stood at the crest of the Dhofar mountains, in the mist, on the edge of extremes. Inland was nothing but parched desert, like the rest of the Arabian Peninsula.  Yet, the coastal side of the mountains was dressed with lush forests, ‘much fruit’ and fountains of water. It is no wonder that this verdant oasis was called ‘the land Bountiful’ by Lehi and his followers when they arrived here at the end of a long journey from Jerusalem.

Somewhere in these same mountains Nephi heard the voice of the Lord direct him to build a ship (I Nephi 17: 7).  His humble reply was simply, “Lord, whither shall I go that I may obtain ore to molten, that I may make tools to construct the ship.?”  Together with three other geologists from Brigham Young University, I had come to this remote place in search of ore, as Nephi of old.

We found ourselves in a similar situation to Nephi.  We had few leads, and the local geologist who arranged to meet us and assist with the search was nowhere to be found.  Although we had decades of exploration experience in many different parts of the world, including Oman, we faced a very difficult, but important task.

The Book of Mormon makes some very specific claims about many aspects of the Arabian Peninsula.  However, information about this place is so difficult to obtain that the only way these claims can be verified is to actually retrace the journey made by Lehi and his followers.   Several groups have done this and made some amazing discoveries,1 one of the most significant of which is the location of, “the place which was called Nahom (I Nephi 16:34).”   It was from this place that Lehi’s group journeyed ‘nearly eastward’ for the space of eight years until they intersected the seashore and found a place ‘with much fruit’, a place ‘prepared of the Lord’, a place that they called Bountiful.

Removing smelted ore from an oven heated to 1100 degrees C.

Due east of the place called Nahom is the Dhofar region of Oman with the modern city of Salalah.  Standing on the mountains overlooking the lush Salalah plain, it is not hard to convince oneself that it is the place Bountiful.  There is no other place like it in all of Arabia.  The unique combination of the funnel-shape and high elevation of the coastal mountains surrounding Salalah forces moist air from the Arabian sea to condense into clouds that bathe the coastal slopes of this small area nearly year-round (Figure 1).  Since climates have not changed much in the past 2500 years, it is likely that the Dhofar region has a similar ecosystem now as it did during Lehi’s time.

If the Salalah Coast is ‘the place Bountiful’, then it also must have an ore body nearby where Nephi could, “find ore to molten.” (I Nephi 17:9).  This is a very specific and bold claim! It requires two rather unique conditions: the existence of an iron ore body, and a type of ore that can melt at the low temperatures attainable in a bellow-assisted fire (I Nephi 17:11). Not only are iron-ore bodies rare, particularly in Arabia, but also most ores require temperatures much hotter than a wood fire can reach.

Ore-bearing rocks are commonly associated in someway with igneous activity.  Yet, there are only a few places in Arabia where igneous rocks are found. Amazingly, one of these places is on the Salalah Coast, which is where we started our search.

The Salalah coastal plain is hundreds of square kilometers and the ore body we were looking for may only be a few meters wide. Other teams of geologists had recently mapped and explored the region, but no ore occurrences were noted. It was clear to all of us that we needed the same type of guidance Nephi enjoyed.

‘Sponge’ iron from smelting experiment. These porous pieces of iron could be used to forge tools through a blacksmithing process of combined reheating and hammering.

As we traveled the rugged road from the misty mountains to the coast we came across a local camel herder named Sahid.  After giving him a ride to his village, he brought us to his humble abode, introduced us to his prize camel, and then made all of the necessary arrangements we needed to explore the coast. The remote southern coast of Arabia has not changed much since the time of Lehi and much of it remains roadless.  Without Sahid’s help in securing a boat we would not have made our first discovery.

At the first beach we landed we discovered a series of vein systems with some iron mineralization.  The seams make distinctive red and orange stripes across the landscape that are well exposed.  The reddish staining is from oxidation (rusting) of the iron in the veins. Since it is highly likely that Nephi knew what to look for, based on his ownership of a steel bow and iron-smelting methods that had become well known by that period of time, these sources of iron would not have been hard to find.

The next discovery came a few days later when we were exploring the igneous rocks east of Salalah. During our reconnaissance of the area we decided to pay a visit to a famous monument to a member of Mohammed’s family.  While there, we noticed some very unusual orange and red carbonate-rich veins intruding granite and other igneous bodies. Following the veins led us to a thick zone, several meters wide, of unique types of iron-rich mineralization.

Orange protrusion on ridge is an intrusion of iron-rich carbonate vein.

What seemed at first as an overwhelming task of trying to find a ‘needle in a haystack’ turned out to be a windfall of discovery.  Why had the other geologists who had recently explored the region in detail missed these occurrences of mineralization?  This is a question we still do not have an answer for.  We carefully mapped and sampled the occurrences over the course of several days, then shared our observations with the Ministry of Mines of Oman.  They confirmed that these ore bodies were new discoveries and are now planning to explore them further.

Geochemical analysis of samples of the veins indicate they mostly consist of minerals known as limonite and ferroan dolomite, which have many unique properties that make it possible, ‘to molten’ the ore as described by Nephi.  These properties include a naturally occurring mixture of iron and carbonate.   Carbonate acts as a natural flux that lowers the melting point of iron to temperatures that are most likely achievable with a wood fire and bellows. We tested the process to make certain it was possible by crushing samples and mixing them with carbon, then heating them to 1100 C (2012 F).  After a few hours the samples were transformed into sponge-iron, which is a brittle form of iron that can be further refined by a combination of heating and pounding.  The samples were essentially ‘molten’ and it would have been possible to forge them into tools.  It appears from the scriptural text that Nephi already knew how to do this, which is consistent with his having a metal bow (I Nephi 16:18).

Lush vegetation and much fruit near Salalah.

For those who have discovered the truth of the Book of Mormon by applying Moroni’s challenge, the archeological and geological verification of bold claims come as no surprise. However, for those who reject the authenticity of the Book of Mormon, these discoveries are hard to explain as coincidence and good guessing.  The specific claims made in I Nephi about Lehi’s journey through the Arabian desert to the place Bountiful have taken years to verify by several different expeditions involving many experienced research teams.  All of the claims have now been verified.  These discoveries represent knowledge not available to anyone when the Book of Mormon was published2.  Some of the discoveries, such as the ore bodies, have remained hidden until we were led to them in a similar way to Nephi.  In the words of Parley P. Pratt, who was one of the greatest champions of the Book of Mormon:

“Angels from heaven, and truth from earth

Have met, and both have record borne.”3

Jeff Keith was the Principle Investigator of the project. Jason Aase collected many of the samples and other field data, which he is using for his Masters Thesis research at BYU. Eugene Clark was an invaluable field assistant. David Tingey assisted with the smelting experiment. Revell Phillips and Kent Brown initiated the project and helped in many different ways. Funding was provided by FARMS and the David M. Kennedy Center.

Another Big Lie, This Time About the Supreme Court

By Christopher D. Cunningham
PAST ISSUES