By Joseph Allen…. taken from his book Exploring the Lands of the Book of Mormon

Editor’s Note:  Do you want to explore the mysteries of the ancient world of the Book of  Mormon?  Have you ever seen a pyramid engulfed in jungle? Meridian has planned something fun-Book of Mormon land tours of Central America and cruises in the Caribbean with guest host Joseph Allen. Click here to learn more or come to www.meridiantrips to see all of our listings for 2004.

Kieth Merrill will accompany Joseph Allen on a land tour leaving Jan. 15, 2004.  He laughs that it is a “location scouting trip” for another movie.  He invites you to bring your digital camera and come along.  Learn more here

Tennis Shoes Among the Nephites author, Chris Heimerdinger will be on a Book of Mormon Symposium at Sea with Blake Allen leaving Feb. 6, 2004  Click here for details.

And it came to pass, as they understood they cast their eyes up again towards heaven; and behold, they saw a Man descending out of heaven; and he was clothed in a white robe; and he came down and stood in the midst of them…. (3 Nephi 11:8) 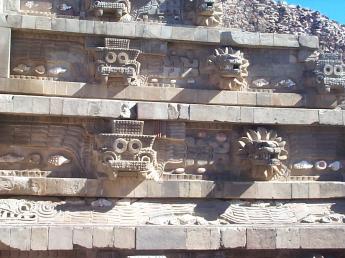 Virtually all 16th Century writers wrote about a white god called Quetzalcoatl (KATES-ALL-CO-OUGHT-ALL). This tradition is strong and repetitive. Every school child in Mexico studies Quetzalcoatl and knows the importance of his role.

The symbol of the serpent has long been associated with deities of Mexico and Guatemala. In the Aztec language, the word “coatl” means serpent. By placing the Aztec word “quetzal” in front of the word “coatl” we have the word, “Quetzalcoatl”.  The word “quetzal” means feathers. A beautiful bird, native to Guatemala, carries the name quetzal. Quetzalcoatl, therefore, means, “feathered serpent,” or serpent with precious feathers. The word quetzal is the name of the coin in Guatemala and also is the national symbol of the country.

Throughout pre-Columbian Mexican history, scores of individuals, both mythological and real, were given the name or title of Quetzalcoatl. Attempts also have been made to attribute the name Quetzalcoatl to only one person. The following quotations are indicative of what is said about Quetzalcoatl.

~ In all of America’s past no figure is more exciting, more tantalizing, or more frustrating than that of the Fair God Quetzalcoatl; (Irwin 1963:33)

Quetzalcoatl was a man of comely appearance and serious disposition. His countenance was white, and he wore a beard. His manner of dress consisted of a long, flowing robe. (Ixtlilxochitl: 45)

Just as our era began with Christ, so that of the Aztecs and their predecessors began-approximately at the same time-with Quetzalcoatl. His image, the plumed serpent, had for pre-Columbian people the same evocative force as has the Crucifix for Christianity. (Sejourne 1957:25)

The story of the life of the Mexican divinity, Quetzalcoatl closely resembles that of the Savior-, so closely indeed, that we can come to no other conclusion than that Quetzalcoatl and Christ are the same being. (Taylor 201)

Similarities of Christ and Quetzalcoatl include the following:

3. Both Christ and Quetzalcoatl are described as being white or as wearing a white robe. (3 Nephi 11:8; Torquemada 47)

6. Both Christ and Quetzalcoatl prophesied of future events. (Ixtlilxochitl: 40)

7. Both Christ and Quetzalcoatl were universal as opposed to just being recognized as local gods. (3 Nephi 16: 1; Sejourne 1962)

8. A great destruction was associated with both Christ and Quetzalcoatl at exactly the same time period in history. (3 Nephi 8:5; Ixtlilxochitl: 40)

12. A new star is associated with both Christ and Quetzalcoatl. (3 Nephi 1:21; Anales de Cuauhtitlan 7)

13. The children of both Christ and Quetzalcoatl will become lords and heirs of the earth. (4 Nephi 1: 17; Ixtlilxochitl: 40)

To learn about Book of Mormon land tours and cruises led by Joseph Allen or his sons, Blake Allen and Todd Allen, go to www.meridiantrips.com