Battle of the Wills | Meridian Magazine 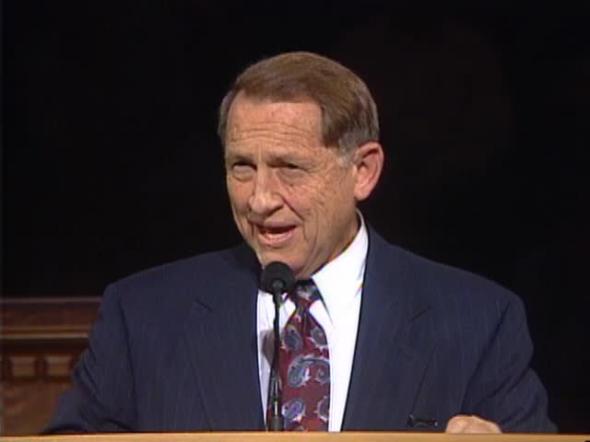 Battle of the Wills

This week we’re covering the Friday afternoon session of the October 1971 General Conference, and I have chosen to focus on Elder Hartman Rector, Jr.’s talk entitled Sacrifice Still Brings Forth Blessings, which was given in the Friday afternoon session of the October 1971 conference. This talk spoke of something I have been pondering for the past several months and Elder Rector said it just right—44 years ago!

After making a sweeping search online to see what the world has to say about sacrifice, I found there were plenty of ideas about morality, such as dilemmas in choosing something that is not evil, or choosing between multiple horrendous choices, or even glorifying heroes, who are sacrifice incarnate. Yes, these certainly exhibit a quality of sacrifice, but there didn’t seem to be a religious, or spiritual, connection to the word. In contrast, when I did an “LDS” search on sacrifice, many past conference addresses popped up, each discussing only a spiritual connection. And this talk was among them.

Members of the LDS Church excel in sacrifice. We learn at a very young age to volunteer, to work in the Church, to visit one another as well as the sick and afflicted. Service and sacrifice are very closely related, because we have all experienced that all too often it can be a sacrifice to serve. When the Olympics came to Salt Lake City, the world was astonished at all the volunteers that were everywhere to give assistance. I ask you, where did these people find the time to spend so many hours standing around directing traffic?

So, is it a sacrifice to stop watching football on the Sabbath Day? Or stop drinking tea or coffee? Or give up activities on Monday nights so we can hold a Family Home Evening with our families? The answer is: Absolutely. But Elder Rector goes a much more interesting step farther, which is the very thing I have been pondering. My own understanding of sacrifice has deepened as I’ve studied the scriptures and attended the temple. Sacrifice is so much more than simply stepping out of my comfort zone and serving when it may not be convenient.

I have imagined all of us eagerly anticipating what it would be like on earth, our pre-mortal minds fearless and excited to come down and show the Lord what we could be made of. We had already chosen Heavenly Father’s Plan and were raring to show our enthusiastic obedience. Likely, we had no idea what it would actually feel like to negotiate our natural man bodies. For each of us, now that we know, I’m pretty sure it is much harder than we ever imagined.

Yet, that is what we must do: sacrifice the natural man and learn to accept and do the will of the Father, realizing that this act has incredible eternal promise, of which we have covenanted to strive for at the time of our baptism and endowment. Our faith will deepen when we consciously make the choice to do what the Lord wants “in His way, when He wants us to do it.”

“…It is apparent that sacrifice, no matter how disagreeable it may be, is absolutely vital, for it is the only means the Lord has provided for his children to gain the faith and assurance necessary to successfully return to his presence in condition to enjoy eternal life.”

Jesus Christ was, of course, the ultimate example of a “disagreeable sacrifice,” but aren’t we so very grateful He performed it, and performed it well. The more I think on this greatest of all sacrifices, the more I realize the importance of this doctrine; and understand why the world doesn’t teach it. There are many examples in the scriptures where true sacrifices were made to the God who has already given us all so much—and who is willing to give us so much more. Others have heroically sacrificed the “natural man” within them, showing me that it is possible for me to do likewise.

As faith increases, so does testimony “that [our] course is pleasing in the sight of God,” as Elder Rector states. This is the grand secret that the world misses. Yes, everyone understands that sacrifice is morally sound, even righteous. Seeing someone else sacrifice moves us to look inside ourselves to see if we have the courage to do the same. But what we may be missing is the root purpose of sacrifice: to please God, to perform His will above all else, and to put Him first in our lives. And as a result of this understanding, I believe it will be our desire to “pass through our own Gethsemanes” (Glenn L. Pace, “Crying With the Saints,” Ensign, Sep 1988).

I’m reminded of Job. He is an example of imposed sacrifice. Everything was taken away from him. But what we learn about Job is that while being imposed upon, he chose to sacrifice his natural desire to murmur. His faith was strong enough to understand that whatever he had been given in this life was a blessing from God. His wealth, his family, and his status were all taken away. Even his body betrayed him. Yet, his faith was stronger than all of it. His sacrifice became a very personal thing between him and God.

Elder Rector quotes Joseph Smith from the Lectures on Faith:

“Let us here observe, that a religion that does not require the sacrifice of all things, never has power sufficient to produce the faith necessary unto life and salvation; for from the first existence of man, the faith necessary unto the enjoyment of life and salvation never could be obtained without the sacrifice of all earthly things: it was through this sacrifice, and this only, that God has ordained that men should enjoy eternal life; and it is through the medium of the sacrifice of all earthly things, that men do actually know that they are doing the things that are well pleasing in the sight of God” (Lectures on Faith, 7).

Our lives are busy. Many things fall under the “have-to” category, but there are other choices we make that we might consider looking at more carefully. We might ask ourselves how we are showing our faith every day. Are the sacrifices we make purposeful? Do they represent what we want God to see in us? What of those situations that are imposed upon us? Does Heavenly Father know where our heart is?

“Just as the atoning sacrifice of Jesus Christ is at the center of the plan of salvation, we followers of Christ must make our own sacrifices to prepare for the destiny that plan provides for us” (Dallin H. Oaks, “Sacrifice,” Apr. 2012).

As I continue pondering upon the idea of “Thy will, not mine,” I will continue to see my Savior’s sacrifice in a deeper, more meaningful, light. The world cannot teach it, but if we are to return back to our Heavenly Father’s presence, we must seek to experience it personally. Jesus Christ paid the ultimate sacrifice not for His own benefit, and not even entirely for my benefit, but because He loved His Father enough to give Him all glory, including the salvation of all of His Father’s children. I love Him for His sacrifice for me, and pray my own sacrifices will demonstrate that love.

Thank you, Elder Rector, for your words. They have inspired me to pay attention more deeply to the Atonement of Jesus Christ, and for the choices it allows me through my own sacrifices.

Here are some of the other talks from this week’s iteration of the General Conference Odyssey. Not all the links were ready when this post was finished, however, so check out the constantly updated index for a complete list. You can also follow along by joining the Facebook Group.

Thanks for your thoughts, Jan. I hope you are enjoying your time contributing such important information to your readers. Come visit us at the museum!

The sacrifice of all things is required but sacrifice always has blessings. Paying your tithing can be called a sacrifice but it's a blessing when we pay it. The Lord will bless us. Increase you Fast Offering and you will be blessed. You can name all the other sacrifices and it's the same we are blessed. Is it really a sacrifice with all the blessings that we receive when we are obedient?