Behind the Two-Year Renovation on the Washington D.C. Temple | Meridian Magazine 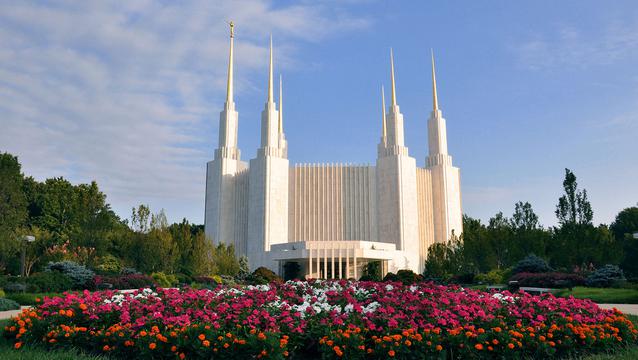 Behind the Two-Year Renovation on the Washington D.C. Temple

Washington, D.C is home to several iconic structures among them The White House, the United States Capitol, the Washington Monument and the Jefferson and Lincoln Memorials. Yet in 1974 The Church of Jesus Christ of Latter-day Saints added another icon to the nation’s capital with a towering 288 foot temple on a hill near the Capital Beltway. Of the 159 Mormon Temples in operation, the Washington, D.C. Temple is the tallest in the world. Area Seventy, Elder Kevin E. Calderwood recently told reporters at a press gathering at the Washington, D.C. Visitors’ Center that when the temple was first built daily traffic reports used the words “the Mormon Temple” and then it became known as simply “the temple.”

Over the last 44 years millions have driven past the D.C. Temple with its white Alabama marble panels and six soaring gold spires with an 18 foot tall angel Moroni topping the tallest spire. Now with a two year renovation underway and a public open house in 2020, the temple is captivating the attention of the greater community, friends of other faiths and area reporters. When renovations are complete there will be a brief period between 30 to 45 days when the public will be able to see and experience why Latter-day Saints call temples Houses of the Lord.

Elder Calderwood told reporters how he was recently with Bishop Burbidge, the leader for the Roman Catholic Diocese of Arlington, Virginia, who has been wanting to come into this temple. Elder Calderwood was pleased to tell him during the open house he would be his guest and walk through every room of the temple.  The original open house in 1974 drew 758,328 visitors including First Lady Betty Ford. Elder Calderwood anticipates the next open house could attract a million to a million and a half people.  Of all the historic and beloved monuments that grace that nation’s capital, Elder Calderwood emphasized, “This temple is a monument to the Savior, Jesus Christ whom we love, whom we worship.”

The newly launched website provides a history of the temple stating, “When the temple was completed in 1974, it served all Latter-day Saints living east of the Mississippi and all Latter-day Saints in South America. At 160,000 square feet, it is the third largest Mormon temple in the world.” The website highlights that “Mormon architects Harold K. Beecher, Henry P. Fetzer, Fred L. Markham and Keith W. Wilcox designed the Washington, D.C. Temple in a collaborative process. Each offered designs for review and critique, which were approved by the Church’s First Presidency. Through this process, the final design emerged representing the best ideas of each architect. This temple, which the architects described as a building of ‘beauty, significance, and distinction,’ took shape as an elongated diamond with towers on the corners…The three spires on the east and the three on the west represent two branches of Church leadership, the Aaronic and Melchizedek Priesthoods.”

Emily Utt, Historic Sites Curator for the Church’s History Department, shared, “According to the architects, exterior stained glass windows are ‘symbolic of the purity and clarity that enters a person’s life as he leaves earthly concerns and aspires toward heavenly matters.’ Bronze medallions at the ceremonial front door and north annex entrance by Franz Johansen represent the Big Dipper and North Star, the earth, the planets, the moon, the stars, eternity and the seven dispensations.” Utt said, “This temple represents a return to the founding locations of the LDS Church – many of the church’s most important historical sites are within the boundaries of the original Washington, D.C. Temple district.”

Roger Hansen, CRSA Principal and Project Architect, informed reporters that “we are upgrading in significant ways the mechanical, electrical and plumbing systems.  This is a privilege…working on this monument on the beltway…we are refreshing the building, but we are not taking away from the great work the original architects did.

John Stoddard, Project Manager for the Church’s Special Projects Department, assured reporters the temple will remain lit at night during the renovation and explained the importance of light in worship. “When we see that temple lit up in the mist of darkness, we are reminded that God is still here.”

Alvin Jackson told reporters that as a young boy he watched the temple being built and marveled at its beauty and wondered what kind of people attended it. In 1994 he became a member of the Church and now serves as a bishop of a young single adult ward.  He sees firsthand the impact of the temple in the lives of young adults he serves.  Bishop Jackson said, “They love going to the temple.  It’s an opportunity for them to serve, to learn, to draw closer to their Father In Heaven and…to have peace in their lives and bring balance…They leave that building inspired to do better things, to be better people, to make a difference not only for themselves but in the community.”
The D.C. Temple serves 123,000 Latter-day Saints in Maryland, Washington, D.C., Virginia, West Virginia and Pennsylvania.  During the renovation Latter-day Saints in the Mid-Atlantic region are able to attend the Philadelphia and Manhattan Temples.
1 Comment | Post or read comments

Years ago my wife and I spent 18 months serving as full time ordinance workers in the D. C. Temple. We loved being in the temple for 8 hours Tuesday through Saturday. We loved the beauty of the temple and its grounds. But we most loved and greatly admired the local workers with whom we served. Many of them drove for hours on I-95 to get to the temple. Some drove to the temple, served a shift, slept in their cars, showered and shaved in the changing rooms in the front of the temple, served another shift and drove home; and had been doing that for the 30 years the temple had been open.