Book of Mormon Extras Lesson 2 - What was the Real Problem with Laman and Lemuel? | Meridian Magazine 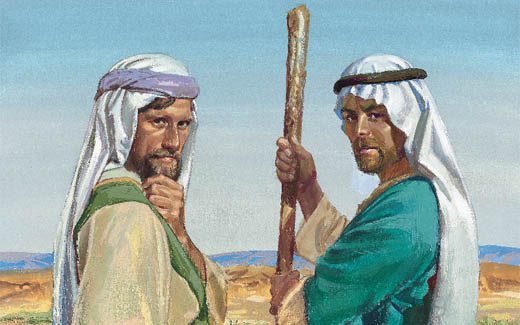 Book of Mormon Extras Lesson 2 – What was the Real Problem with Laman and Lemuel?

Once when I was teaching an institute class on the Book of Mormon, I lined up two scriptures and asked a question that I thought would be easy. As it turned out, it wasn’t.

There is a point in Nephi’s record of the wilderness journey, he and his family take from Jerusalem, where he pauses in thanksgiving and exclaims:

“And so great were the blessings of the Lord upon us, that while we did live upon raw meat in the wilderness, our women did give plenty of suck for their children, and were strong, yea, even like unto the men; and they began to bear their journeying without murmurings.

“And thus we see that the commandments of God must be fulfilled. And if it so be that the children of men keep the commandments of God he doth nourish them, and strengthen them, and provide means whereby they can accomplish the thing which he has commanded them; wherefore, he did provide means for us while we did sojourn in the wilderness” (1 Nephi 17: 2,3).

In these verses, Nephi is exultant, happy and grateful, in awe of the Lord’s hand in his life. Now, Laman and Lemuel had travelled the same miles he had. The heat had borne down on Nephi and Laman and Lemuel with the same driving force. The relentless desert wind had dried all their faces and parched their throats without partiality. They had all equally lived on raw meat and given up the honey and pomegranates of home. If ever there were the perfect scientific experiment where all were subjected to the same conditions to test to see their differing responses, this was it.

So with Nephi’s happy response in hand, we now turn to Laman and Lemuel’s—which was a whining lament, an acid complaint. One can imagine their journeying all day, quietly seething, because to talk was to lose too much moisture, and then erupting in anger in the cool of the desert evening, with this:

“Behold these many years we have suffered in the wilderness, which time we might have enjoyed our possessions and the land of our inheritance; yea, and we might have been happy” (1 Nephi 17: 21).

The same journey; two such radically different responses. I asked my class, “What was Laman and Lemuel’s most basic problem?”

Though I considered this an obvious question, it was an important one because it applies to all of us. We know that Nephi, Laman and Lemuel literally took a journey through the wilderness, an eight-year-marathon that took them from Jerusalem to the shores of the Arabian Sea —and then beyond. This journey, however, was also a metaphor of everyone’s life experience. It applies to all of us.

Here in mortality, we are cast into the wilderness, taking a wilderness journey, where, like Nephi’s family, we experience the tremendous heat of trial, the tedium of the way, the wandering through a sometimes trackless desert, the hardship, the thirst. Sometimes we are deluded into thinking that this life should be a Sunday school picnic or a ride on a cruise ship instead of a wilderness journey, and we become miffed that it is all harder than our expectations, but neither the picnic, nor the cruise ship, show up in scripture—just the wilderness journey repeated by Nephi, by Moses, by the Mormon pioneers, a theme in every book of scripture.

We are placed on a wilderness journey because the Lord is doing his work on us, because always the purpose of such a journey is to transform the travellers, burn out their impurities, strip them of the world, clarify their thinking, and sharpen their devotion that they may be candidates to dwell in the promised land. The wilderness journey is the Lord’s kindness to us, to make us fit for His kingdom.

Thus it really matters to understand why Nephi’s experience on the journey was so different than Laman and Lemuel’s, and thus I waited for the answers from the class with great interest.

They responded, in nodding agreement, that Laman and Lemuel just had a bad attitude. This sounded like an answer born of too many self-help books and do-it-yourself programs. “Chin up. Cheer up,” Laman and Lemuel. “Anything worth doing is worth doing well.”

“Hey, team. You can do it. So Nephi broke his bow and you are about to starve? Don’t worry. Be happy.”

Calling Laman and Lemuel’s problem just one of having a bad attitude assumes that all they really needed to do was have a better attitude and things would go swimmingly for them. It is an answer in the spirit of a secular age that contends that man is in complete control and that maybe a few positive affirmations every morning was all that they needed to feel better—no matter how hot the wind blew.

It comes with the sense: why use the Liahona when you’ve got a GPS?

It is an answer that says man is the measure of all things and fails to look not only at the core of the issue, but the core of a person. If the core is not addressed, all the other advice falls flat.

I asked this question about why Laman and Lemuel had such a miserable time on the wilderness journey, because the answer had already been given in the Book of Mormon—and not just anywhere, but right at the beginning of the journey: “And thus Laman and Lemuel, being the eldest, did murmur against their father. And they did murmur because they knew not the dealings of that God who had created them” (1 Nephi 2:12).

Nephi’s journey, which is a type of our journey in life, was joyously transformed because he did know the dealings of that God who had created him. This core understanding changed the nature of his journey through the desert and later across the whirling, boiling sea because it changed his core, the very essence of who he was.

He did not face anything alone or without purpose. God walked by his side, led him to the more fertile parts of the wilderness. He knew who stood by him when he climbed into the crags of the mountain tops looking for just the right wood to make a bow. He had protective arms around him when the way was hard. Even when he became depressed later in the promised land, and Laman and Lemuel sought his life, he was lifted up again by remembering, “I know in whom I have trusted.”

He had been given strength because he could say with confidence: “My God hath been my support…He hath filled me with his love…He hath confounded my enemies…He hath heard my cry by day, and he hath given me knowledge by visions in the nighttime” (2 Nephi 4: 20-24).

Even if Laman and Lemuel had not been given to whining and had wanted to assume a good attitude about the journey, all the best self-talk in the world pales pathetically to what Nephi had.

Their problem is clear. They “knew not the dealings of that God who had created them” and therefore their wilderness journey was going to be merely a miserable, futile experience that not only did not transform them to make them fit candidates for the kingdom, it ground them into empty whiners with murderous resentments.

They became people ripe for discouragement, despair, and anguish.

From his glorious vision, Nephi comes back to their tent and finds that Laman and Lemuel have spent that same time, “disputing one with another concerning the things which my father had spoken unto them” (1 Nephi 15:2). What? They are just fighting with each other, complaining about their father, and fueling their negativity? Give me a break. Surely they can do better than this.

Nephi, too, is incredulous. “Have ye inquired of the Lord?” They, too, could have had answers. The Lord had stood with his arms outstretched to them, willing, but they would have nothing of it. Instead, they bickered, “the Lord maketh no such thing known to us (1 Nephi 15:9). What a sad trade.

Surely, as sons of Lehi, Laman and Lemuel had been taught about God, just as Nephi had—but, nonetheless, and obviously, they did not know Him. They had not learned what they had been taught, because to come to know the dealings of that God who has created us, it is not enough to have someone else tell you about him. You learn about who he is, in those hours in your room on your knees. He reveals himself to you when you seek him with all your heart and when your whole mind and soul is inclined toward him.

Laman and Lemuel did not want to pay that price, and so they paid other, agonizing prices instead, throughout the entire journey. They suffered, not because the Lord imposed suffering upon them, but given the nature of the journey, it was the natural consequence of attempting to go it alone.

Because at their core, they knew not God, at their core they could only respond to the reality of the journey with the outlook of the natural man.

We are often told by the world that real freedom and growth comes from abandoning God and his standards, and exercising our will, walking in our own way. What God wants is to make us sheep, to restrict us, to trample our individuality, we hear. Yet, who not only has all the fun, but also all the growth on this journey—Nephi, or his brothers, Laman and Lemuel? Who develops leadership, ingenuity and integrity? Who gets to make a bow and build a ship? Who has visions and talks to the very Creator, himself?

Who, on the other hand, spends all their time plotting and complaining, withering away with every passing year?

We know those answers, and it is easy to sit here at our seeming distance from the desert and call Laman and Lemuel foolish, but the more telling thing is to use their story to look back at ourselves.

In actuality, we are not so far from the desert. We are on our own wilderness journey, specially designed and customized to purge us of our weaknesses and bring us home ready to inherit the promised land.

If we would weather our lives with joy, feel shored up and loved even on the loneliest stretches, strengthened for the battle that rages all around us, made courageous against the fiery darts of the economy or the family disappointments or the illness which plagues us, then it is not enough just to decide to have a good attitude.

Such resolutions will ultimately fail us, because they do not come from the place of real power. Instead, we must “know the dealings of that God who created us.” When we are willing to pay the price to know him, more than a good attitude follows. What follows is strength and joy and the deep affirmation, “O Lord, I have trusted in thee, and I will trust in thee forever.”

Wow! What a wonderfully insightful article. That relationship with Heavenly Father and Our Savior, Jesus Christ, is truly what it's all about. Following the Lord brings lasting joy during the journey, as well as at its destination. Beautifully written. Thank you!

This precisely why my life's tagline is: Life is not a journey to the grave with the intention of arriving in a well-preserved, gently used body. It is rather a skid to broadside, thoroughly used up in service, totally wornout from trials, and loudly proclaiming "Wow! What a ride!"