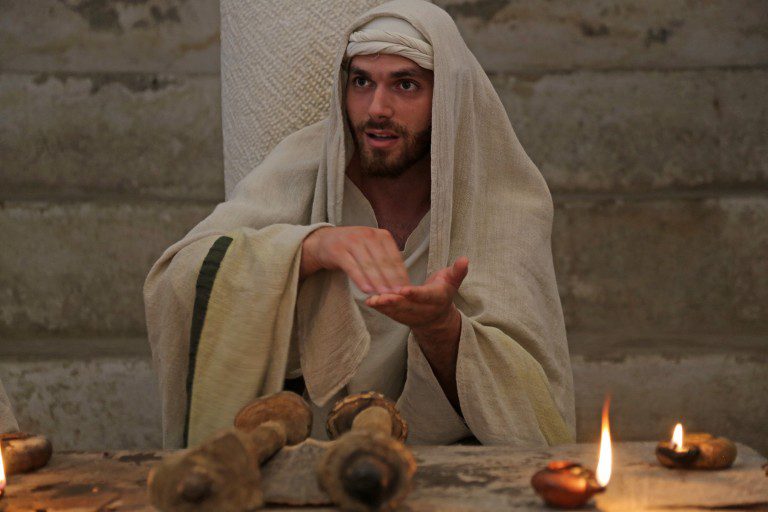 Cover image: This image is of a nearly-30 year old man named Majd, born and raised in Nazareth, taken in a synagogue in Nazareth.

Jesus goes into the wilderness, fasting for 40 days, to commune with his Father, and then when he is famished, Satan comes upon him with temptation. As the arch liar who has eons of practice, he uses types of temptations on the Savior, which he also uses on all of us. What these are and how the Savior resists him is a profound teaching for us all.

In this lesson, we also see the Savior announcing in the synagogue at Nazareth that he is the Messiah and being resisted by those who should have known him best.

This 30-minute podcast by Scot and Maurine Proctor also takes us to the Sea of Galilee where Peter, James and John were called to be fishers of men and shares Elder Neal A. Maxwell’s unforgettable quote about that choice. You can listen to the podcast in the link below on SoundCloud.

You can also find the podcast on the following platforms (click on the platform of your choice):

References cited not in the chapters studied:

Then Jesus was led up of the Spirit, into the wilderness, to be with God.

Other Instances of Jesus Praying to His Father

And he withdrew himself into the wilderness, and prayed.

And it came to pass in those days that he went out into a mountain to pray, and continued all night in prayer to God. And when it was day, he called unto him his disciples: and of them he chose twelve, whom also he named apostles.

Then Jesus was taken up into the holy city, and the Spirit setteth him on the pinnacle of the temple.

And now Jesus knew that John was cast into prison, and he sent angels, and behold, they came and ministered unto him.

Ye are they which have continued with me in my temptations.

The Spirit of the Lord God is upon me: because the Lord hath anointed me to preach good tidings unto the meek; he hath sent me to bind up the brokenhearted, to proclaim liberty to the captives, and the opening of the prison to them that are bound.

To proclaim the acceptable year of the Lord, and the day of vengeance of our God to comfort all that mourn.

Greek—tekton means a worker in wood or stone, a builder.

I am he of whom it is written by the prophets; follow me, and I will make you fishers of men.

While we see this quality in the quiet but spiritually luxuriant lives of the genuine, spiritual heroes and heroines about us, the lack of it keeps so many of us straggling in the foothills and off the peaks in the adventure of full discipleship. I refer to our hesitancy and our holding back in submitting fully to the Lord and His purposes for us.

This holding back is like leaving Egypt without journeying all the way to the Holy Land, or waiting in Nauvoo for the railroad to come through, or staying permanently at Winter Quarters.

Suppose Peter had not left his nets “straightway”? (See Mark 1:18.) He might have become the respected president of the local Galilean fishermen’s association. But he would not have been on the Mount of Transfiguration with Jesus, Moses, and Elias and heard the voice of God. (See Matt. 17:4.)

A person may profit by noticing the first intimation of the Spirit of Revelation. For instance when you feel pure Intelligence flowing unto you it may give you sudden strokes of ideas that by noticing it you may find it fulfilled the same day or soon

We must be confident in our first promptings. Sometimes we rationalize; we wonder if we are feeling a spiritual impression or if it is just our own thoughts. When we begin to second-guess, even third-guess, our feelings—and we all have—we are dismissing the Spirit; we are questioning divine counsel. The Prophet Joseph Smith taught that if you will listen to the first promptings, you will get it right nine times out of ten.17

Now a caution: don’t expect fireworks because you responded to the Holy Ghost. Remember, you are about the work of the still, small voice.

I have learned, as I have mentioned in previous messages, never to postpone a prompting. On one occasion many years ago, I was swimming laps at the old Deseret Gym in Salt Lake City when I felt the inspiration to go to the University Hospital to visit a good friend of mine who had lost the use of his lower limbs because of a malignancy and the surgery which followed. I immediately left the pool, dressed, and was soon on my way to see this good man.

When I arrived at his room, I found that it was empty. Upon inquiry I learned I would probably find him in the swimming pool area of the hospital, an area which was used for physical therapy. Such turned out to be the case. He had guided himself there in his wheelchair and was the only occupant of the room. He was on the far side of the pool, near the deep end. I called to him, and he maneuvered his wheelchair over to greet me. We had an enjoyable visit, and I accompanied him back to his hospital room, where I gave him a blessing.

I learned later from my friend that he had been utterly despondent that day and had been contemplating taking his own life. He had prayed for relief but began to feel that his prayers had gone unanswered. He went to the pool with the thought that this would be a way to end his misery—by guiding his wheelchair into the deep end of the pool. I had arrived at a critical moment, in response to what I know was inspiration from on high.

My friend was able to live many more years—years filled with happiness and gratitude. How pleased I am to have been an instrument in the Lord’s hands on that critical day at the swimming pool.

I find myself relying on the references and quotes as printed. I still am a better reader than a listener due to hearing loss.

We are loving your podcasts, but wish so much to be able to access them in printed format tor family and people we know that are incarcerated.