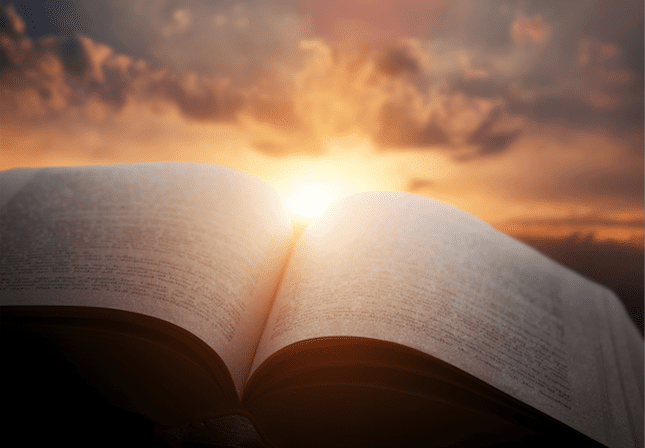 Coming to Love the Old Testament

In the beginning, the first time I read the Old Testament, at home, on my own, the entire volume seemed to be without form and void, and darkness was upon the face of nearly every page. But the Spirit of God moved upon me as I persisted, and eventually, gradually, after a while, there was some light as I started to glimpse its overall organization and general narrative flow. Its books divided one from the other, and I began to see within them a distinctive character and purpose. And this was my first reading of the Old Testament, I being nineteen, after my freshman year, just before my mission,

And later, after I had been on my mission a few months, my mission president said, let each missionary read all the Standard Works at least once a year, and let the connections between these scriptures become more apparent, and it was so. And as I read, I began to see how the New Testament, the Book of Mormon, and the Doctrine and Covenants all drew from the Old Testament, building upon it, amplifying its stories and enhancing its many messages. And my mission president called this a good lesson, and this was my second reading of the Old Testament.

And my mission president said to me, specifically, in an interview, okay, if you really think focusing on the Old Testament will help you be more effective in your missionary work, gather together all the books you require on the subject and read them. Let additional study goals appear, and focus especially on the Abrahamic Covenant, on the Restoration of the House of Israel, and on the prophecies concerning the Messiah who should come. And my mission president oversaw all my efforts and ensured that they were good, and I did bring forth additional notebooks and charts and reports; and my knowledge of the lineages and promises presented in the Old Testament yielded much fruit after its own kind. And this was my third reading of the Old Testament.

And two years later one of my BYU religion teachers said, let my students read the Old Testament in light of Near Eastern history that some knowledge of the Egyptians, Babylonians, Assyrians, and Persians may provide additional context and understanding of the events present in it. And so he, gave us two great lights with which to understand the Old Testament: the light of the Spirit to reveal spiritual truths and the light of academic scholarship to disclose historical and cultural truths. And I saw that these two great lights did work together to illuminate the Old Testament. And he did test us on our knowledge and require us to write papers on our findings. And this was my fourth reading of the Old Testament.

And that same religion teacher also said, let my students’ readings bring forth abundantly real people, men and women who have faults and failings, who make mistakes, but who, often, learn from their mistakes, repent, and change in heroic ways. And again he said, let this study be fruitful and may it multiply my students’ heroes and provide examples for them to benefit from and follow. And so I became acquainted with Abraham and Sarah, Isaac and Rebekah, Jacob and Leah and Rachel and Esau, and many, many others; and I admired them when they were faithful and suffered with them when they were not; and I came to see these people as friends. And this was my fifth reading of the Old Testament.

And my bishop, after I had left BYU, said unto me, so you think you know the Old Testament, do you? Well, read it again and teach it unto this year’s Gospel Doctrine class, and it shall bring forth insights such that you had never considered before, and it was so. And as I read the Old Testament again, I saw, seemingly for the first time, how the Lord tried to set up a kingdom of priests, a holy nation, in a land where he reigned supreme, fought his subjects’ battles, solved their problems, and righted their wrongs. And I saw how deeply the Lord mourned when his people chose an earthly king over him so that they might be like “all the nations,” and I began to connect with the Lord emotionally as I had never had before.

I felt his love as he called to his people patiently, again and again, through the many voices of the Old Testament—the poetic voice of Isaiah, the insistent voice of Jeremiah, the visionary voice of Ezekiel, the very human voice of Jonah—and I understood how wrong it was to characterize Jehovah as a god of wrath and rules. I began to visualize him instead as an ever-patient parent, a being of deep emotion, sympathy, compassion, and concern. And I beheld that this image was fruitful and did greatly increase my understanding of the Old Testament as well as my appreciation for Jesus and his gospel. And I saw that this was not only good, but it was very good. And I felt that I had at last subdued the Old Testament, and this was my sixth reading of the Old Testament.

And so when I was called to teach Old Testament as an early-morning Seminary teacher, many years later, I planned on resting from all the work that I had done. I felt that there was nothing new under the sun that I did not know about the Old Testament, that further study was vanity, and I looked forward to having the Law depart from my mouth without my having to meditate on the Old Testament day and night, as I once did. But it was not so. Perhaps because I was teaching young people, I marveled at the ingenuity of the Lord’s object lessons—the plagues, the Passover, the manna, the serpent—and stood in awe at the vast array of instructional aids he had assembled in the Mosaic Temple, all in order to teach his people eternal principles of obedience, sacrifice, righteous respect, fidelity, consecration, gratitude, and love. Leviticus suddenly became fascinating to me as I began to understand how worshipping through symbols works, and I began to see many connections to modern temples, and I was surprised.

And so it goes. To this day, I continue to study the Old Testament—reading it regularly, learning its literature, seeking out its sources, delighting in its details—in order to master its many meanings and be ministered to by its Creator. He may have finished fashioning the earth in six creative periods, but I am certain His work with me through the Old Testament will never be complete, certainly not in seven readings or even in seventy times seven, worlds without end.

Very good, Brad. I have heard so many comments from those of Jewish background coming into the Church about how little we LDS know the OT, and especially missionaries, don't know enough about it to really talk to Jewish persons in what might be called their language. I didn't. When my wife had me do a frontal attack on the OT, I was largely lost in the names and overblown numbers. Whereas I do not yet know it with the skill that my bros manipulate around BOM scripture, I have come to know areas of very great, indispensable, value - largely at the feet of Dave LeFevre and Lynda Cherry who bring it ALL^ together in beautiful harmony, but also in the attempted completion of Professor LeGrand Baker's great book. A week ago, I had nearly an hour to read in the Temple, and I made very pleasing discoveries in the first few chapters of Jeremiah. It's there!! * ALL the standard works including the BOM - all in a great tapestry - with the thematic statements of Church authorities and credible scholars. Not just one. And the D&C has such great value way more than just latter day Church history. Many Jewish converts heard God's voice within it.

We all likewise need to be converted to and instructed by this great book of scriptures. Most inspiring article!