Did Anyone Else in History ever Mention Nephi’s Bountiful? | Meridian Magazine 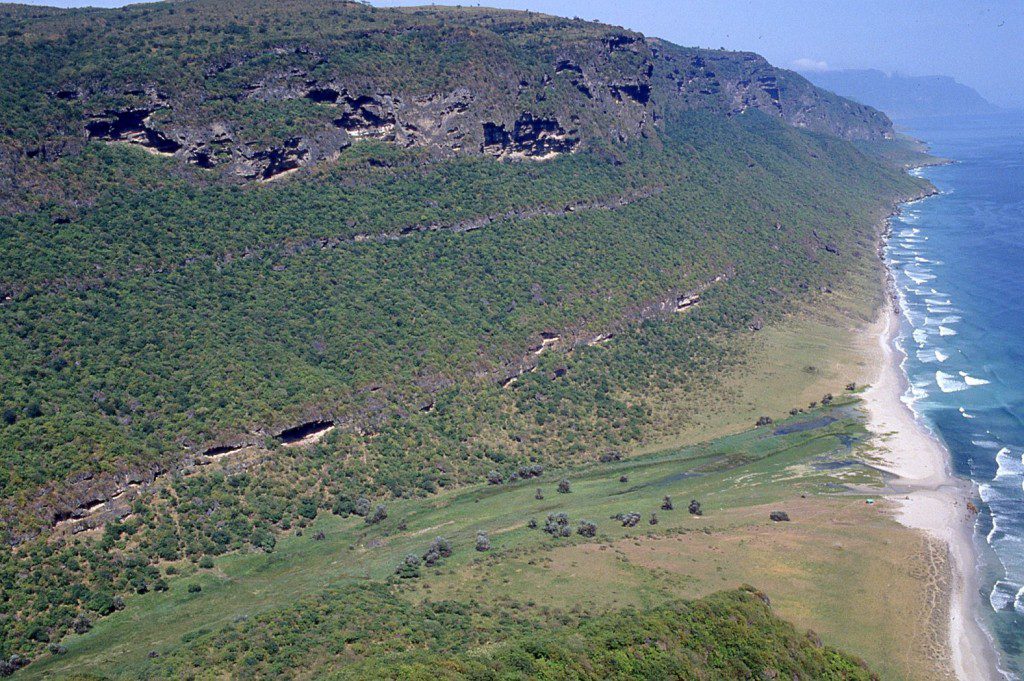 Did Anyone Else in History ever Mention Nephi’s Bountiful?

With this article, we will begin our report on February’s archaeological expedition to Khor Kharfot. Here Aston reminds us that debate on the Old World setting of the Book of Mormon has all but ceased—a good reason to learn and explore everything we can about Nephi’s Bountiful.

The following was extracted from Warren P. Aston’s new book, Lehi and Sariah in Arabia: The Old World Setting of the Book of Mormon (2015). Click here for more information.    To buy a hard copy of the book, click here.

As we study the Book of Mormon as this year’s adult curriculum, this is a good time to note some developments concerning it. Of course, the Book of Mormon has been under attack ever since it first appeared in 1830. It remains so, both from critics without and from cultural-Mormons within.

This article examines one of the main fronts of attack: can the Book of Mormon be considered an account of real people, real places and real, historical, events? If it cannot be so anchored, if it is viewed merely as a myth or some kind of “inspired fiction,” how can a claim that the resurrected Christ visited the Americas, and his teachings to the people, be taken seriously? Why should its prophetic warnings aimed at our day, at our generation, be taken literally? Finally, what are the implications if the “Keystone” of the Restoration is not what it claims to be?

A great host of internal evidences now attest the Book of Mormon’s ancient origins, and they continue to come forth. Far from being a laugh-worthy jumble of credulous stories as its first critics charged, the Book of Mormon has emerged as highly sophisticated, a work of interwoven intricacy. Ancient writing patterns such as chiasmus and literary forms not known in 1830 have emerged within its text. Many proper names and terms are firmly identified as plausible and appropriate for the period. Studies have shown that the various books do, indeed, appear to have been written by different people; Joseph Smith not among them.

To be sure, work remains to be done in every field, so research continues, just as it does for the Old and New Testaments. Meantime, though, all these studies are readily available to us. A perfect place to begin is the information repository, Book of Mormon Central at www.bookofmormoncentral.org, and at the websites linked at the bottom of its home page.

The Book of Mormon’s Real-world Setting

While a majority of researchers believe that the real-world setting is actually now known in some considerable detail, most readers would be aware that controversy is still being aggressively stirred up about the book’s New World setting. Its net result has confused and diluted the potential impact of the Book of Mormon among members and non-members alike. This is surely an incredibly sad diversion of resources and energy from where they are really needed. Even in an abridged account, a millennium of history involves innumerable fields of study, so it is unfortunate when sacred texts become hostage to faulty assumptions.

Contrast that with the Old World setting, where debate has all but ceased. A few finer points are still discussed among researchers, but they are minor, almost inconsequential, when seen against the backdrop of the entire Lehite journey. Here, the tide has surely turned in the Book of Mormon’s favor.

The 18 chapters written by Nephi detailing the journey from Jerusalem to Bountiful have been subjected to intense examination and wide-ranging exploration in recent decades. The most optimistic believer in the book could not have imagined the treasure-trove that has emerged from that focus. Relevant here is that one of the key locations in Nephi’s record, Nahom (1 Nephi 16:34), is indisputably attested in the real world through inscriptions and historical accounts. This unique name appears in exactly the right place and dates to the right period.1

I want to focus here on Nephi’s “Bountiful.” In the next days, Meridian will publish news of the first excavations that have just taken place there. Over recent years, a general consensus has been reached among LDS researchers that Khor Kharfot in southern Oman most plausibly represents the place that Lehi’s group named “Bountiful” (1 Nephi 17: 5-6). Only a literal handful of researchers feel otherwise. This near-unanimity over a Book of Mormon location is exceeded only by the agreement that has emerged over the location of Nahom. The inability of critics to explain how the Book of Mormon encapsulated such detail – over a century before it could be verified – has been particularly striking.

Nephi’s Bountiful was Recorded by Others

Lehi and his family were not alone in being amazed by the abundance of fruit, honey and timber readily available at the Old World Bountiful. We now know that at least two other groups also recorded this remarkable place.

Let’s begin with the modern place, Khor Kharfot, on the Dhofar coast of Oman, just a few miles from its border with Yemen. In Arabic, a Khor simply means a sea inlet. As for the rest of the name, the Arabic name Kharfot actually comes from a pre-Arabic Mahri term, Kharifot. Mahri is an ancient, little understood, language with its origins stretching far back into antiquity. It predates not just Islam, but also the arrival of the Arabic language in this part of the world.

Because it is so old and appears nowhere else in Arabia, it is exciting to learn what the name Kharifot actually means. This word refers primarily to the annual monsoon rains each year that make Khor Kharfot the most naturally-fertile location on the Arabian coast. For three months the coast here is blanketed in drizzle, fog and sometimes heavy downpours, emerging with a super-abundance of vegetation. So Kharifot has the meaning of “the monsoon rains have brought abundance to this place.”

I don’t need to point out the obvious correlation of “abundance” with the term that we translate into Spanish as “abundancia” and into English as “bountiful.” Both words are synonyms, they mean the same thing. But there is more.

The name Kharifot has a dual meaning. In addition to the concept of abundance it also encapsulates the picturesque and suggestive phrase, “the trees have ripe fruit.” Nephi tells us twice exactly why his group named the place Bountiful: above all it was because of its much fruit (1 Nephi 17: 5 and 6). How significant that the Lehites and also the ancient Mahri-speaking inhabitants living around it, not only named this specific place as a place of abundance, but that both groups singled out its fruit for particular mention!

As if that was not enough, there appears to be a second intriguing historical link to the Book of Mormon account. Far away in the New World, the Americas, another group of people who claim to have migrated from the Old World, teach that they left from a place of “abundance.” As scholars began to translate and understand the writings left by the early Maya people in Mesoamerica, a particular term appeared whenever they recounted their legends about their origins far across the oceans. The term they used is Tulan.

The term Tulan or Tula is a pre-Classic Nahuatl (central Mexican) word meaning “place of abundance,” with a derivation that adds the meaning “place of cattails [reeds]” which is also a significant clue to the identity of this place. Very early on, it seems, Tulan became almost ubiquitous in the early accounts of origins and over time it came to be associated with their creation legends.

As an example, the 1934 translation of a text called The Annals of the Cakchiquels into Spanish rendered Tulan as Lugar de la Abundancia, or “the place of abundance.”2 This wording is identical to that used in the Spanish translation of the Book of Mormon when it refers to the Old World Bountiful. Here, in English translation, is one of the many Maya references:

…we came from the west, from the place of abundance, from the other side of the sea.

There is much more to this story, especially the fact that these texts contain a host of other quite specific details about what this place of abundance was like. Some of these details were highlighted in an earlier Meridian article 3, but what is relevant here is the simple fact that branches of the Maya people claim that their forbears came from a unique place. It had characteristics striking enough to be remembered in detail in their foundational accounts over a thousand years later.

The two implications for the Book of Mormon

Firstly, the consensus about the Old World setting is an encouraging advance in Book of Mormon studies. It should give us hope that the entire geographical setting of this sacred scripture will eventually crystallize. As that happens, its claims will be seen by the honest-in-heart as ever more plausible and grounded in history. Its message will be taken more seriously.

Secondly, the convergence of beliefs from two widely-separated peoples, the early population of southern Oman and the Maya in Central America, with details that Nephi recorded, is stunning.

Such evidences are surely part of the Lord’s plan to have this additional witness of the Risen Christ taken seriously.

Extracted from Warren P. Aston’s new book, Lehi and Sariah in Arabia: The Old World Setting of the Book of Mormon (2015). Click here for more information.

I just finished reading Warren's new book, Lehi and Sariah in Arabia. It is a treasure house of information about the Old World setting of the Book of Mormon and also shares insights about the New World account as well -- including some of the "legends" of the Mesoamerican people (the Maya in particular) about where their fore fathers came from. It was fascinating; and at only $9.99 for an e-book copy, is inexpensive as well. (I had no problems with the download from Xlibris; and I have very few bands of service where I currently reside, so it should pretty much work for everyone else as well!)

I have Warren's new book, Lehi and Sariah in Arabia -- which is pictured in this article -- and just finished reading it yesterday. It is a treasure trove of fascinating information -- some of which I already knew, but much that I didn't. I would urge anyone who wants to know more about the Old World setting for the Book of Mormon, as well as some additional information about it's connections with Mesoamerica, to -- at the least -- purchase an e-copy of the book! At only $9.99 -- with NO shipping (!) it is a very inexpensive price to pay for such a wealth of information, from someone who probably knows more, in general -- as well as in particular -- about the subject than anyone else currently studying it!