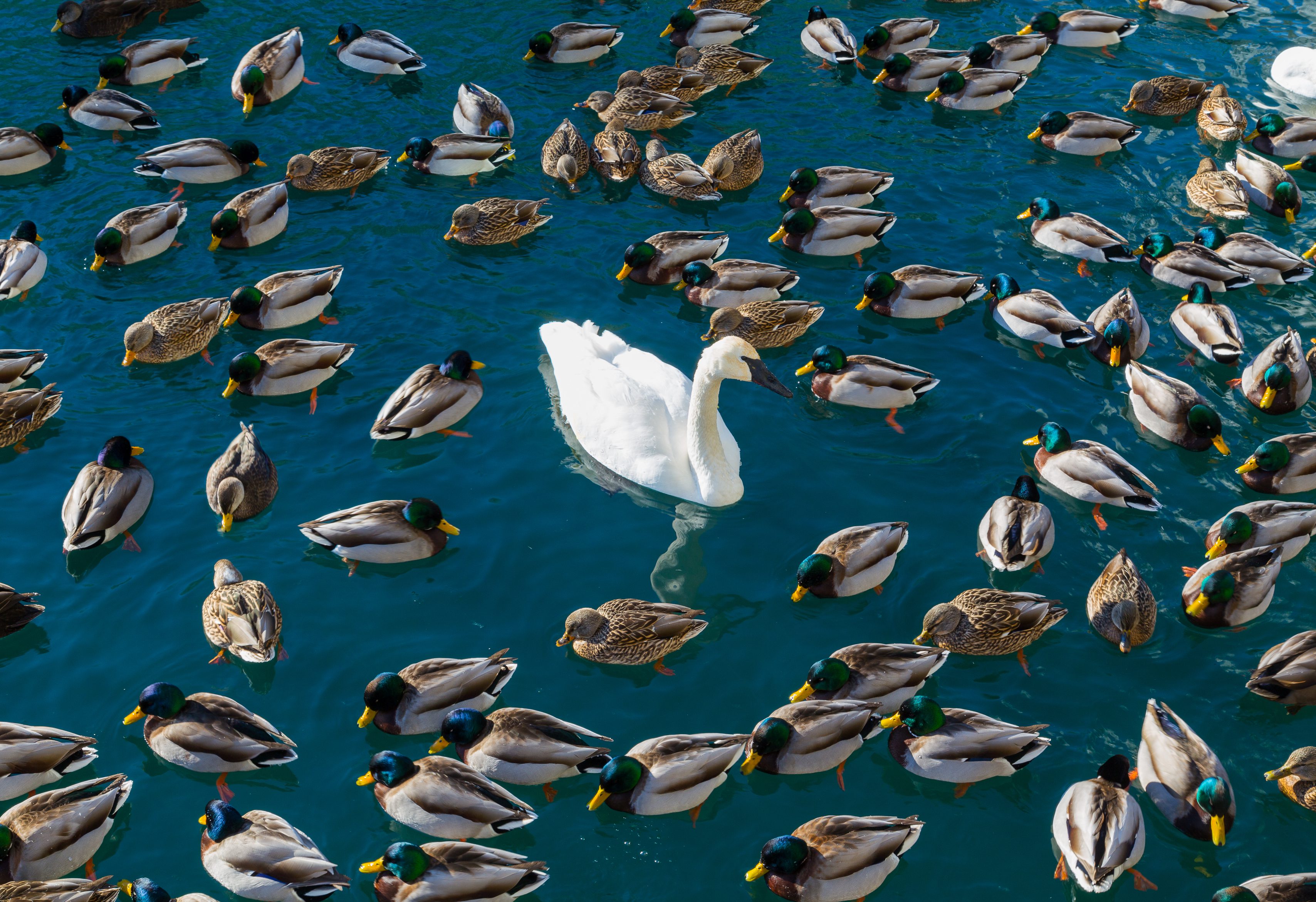 Diversity is a generous idea whose meaning has become distorted. Smart people with straight faces, missing the irony altogether, demand that you think precisely as they do—and they make that claim in the name of diversity. Today diversity too often demands conformity of world-view, a strait-jacketing of opinion, which would be bad enough, but if you don’t line up and agree with them in the sacred name of diversity—watch out.

Matt Holland, president of Utah Valley University, along with 100 scholars, recently signed an amicus brief supporting man-woman marriage in the case just heard before the Supreme Court. For this, he did not go unpunished by the diversity police. Well more than hundred faculty and staff at UVU signed a letter condemning his choice—though he did not sign in his capacity as university president.

The letter acknowledged: “As President Holland has always championed on campus, diversity and inclusion mean creating an environment of genuine respect and civility for all people in the exercise of strong and different beliefs, and from different backgrounds.” The letter acknowledges that this has been a core value of his administration.

Now comes the stinger. “As current and former members of the Utah Valley University faculty and staff, we find President Matthew Holland’s promotion of the spurious ideas expressed by the ‘100 scholars’ and the potential association of UVU with the Schaerr brief to be disappointing and harmful to the values at the core of our public university.”

“Disappointing and harmful”? It is not enough that same-sex marriage has swept the nation by judicial decree, wiping out the voice of the people. Now using the potent weapon called “diversity”, one of the reigning values in our society, the diversity police seek to stamp out public discussion and dissent.

Just to be diverse, they get the duct tape for your mouth. Don’t talk. Punishment will follow.

Before the marriage case hit the Supreme Court, The New York Times noted that though the court was flooded with amicus briefs, an equal pile on either side, there was a marked difference in legal firepower. The powerful law firms of the nation overwhelmingly lined up on the side of same-sex marriage.

“’Firms are trying to recruit the best talent from the best law schools,’” said Dale Carpenter, a law professor at the University of Minnesota, “’and the overwhelming majority of them want to work in a community of respect and diversity.’”

“But some conservatives say lawyers and scholars who support religious liberty and oppose a constitutional right to same-sex marriage have been bullied into silence. ‘The level of sheer desire to crush dissent is pretty unprecedented,’ said Michael W. McConnell, a former federal appeals court judge who teaches law at Stanford.”

Crushing dissent sounds like the act of a police state and it seems all together worse if you are the dissent. While President Holland received a hand slap from his colleagues’s letter, others have received more.

Michael Lindsey, president of Gordon College, a small Christian college just north of Boston, signed a letter asking Obama “to include a narrow religious-liberties exemption in his executive order banning sexual-orientation discrimination by federal contractors. The requested exemption was in fact narrower than one that Massachusetts Senator Elizabeth Warren had supported in the Employment Non-Discrimination Act (ENDA) a mere eight months before.”

To make matters worse Gordon College has the gall to espouse the Christian ethic of sexuality—abstinence before marriage and defining marriage as the union of a man and a woman.

No dissenting speech goes unpunished. The diversity police descended on Gordon College and Lindsey. The city of Salem refused to allow Gordon College to use its Old Town Hall as it had for years. The Lynn School Committee, refused to accept Gordon’s education students as student teachers. The most sinister threat came from the school’s accreditor, the New England Association of Schools and Colleges (NEASC) which had to reconsider whether Gordon’s standards forbidding “homosexual practice” met NEASC’s standards of policies and procedures that are non-discriminatory.

Gordon College was in a crucible of pressure for a year, but finally won in their battle for continued accreditation

Diversity in the DNA

Diversity sounds like a grand idea and it has been written into the DNA of American life and the core values of most of our business and academic institutions. Unfortunately, it has also become a club to beat down dissent.

Conservative columnist Jonah Goldberg got a good laugh when he replaced Robert Scheer, a leftist, as a columnist at The Los Angeles Times because Barbra Streisand canceled her subscription to the newspaper in the name of diversity.

Goldberg wrote, “Let the record show that Robert Scheer’s ethnic lineage and my own are remarkably similar. We both hail in large measure from the same stock of East European Jews and Germans. His parents worked in the garment industry, and so did my grandparents (on my father’s side). Mr. Scheer is, by popular parlance, upper middle class and white. Oh, and I should add, without much fear of contradiction, that neither Mr. Scheer nor myself are female or gay.

“So in terms of the most common understanding of diversity these days—racial, sexual, gender, or ethnic-swapping, a Scheer for a Goldberg is a wash, little more than the equivalent of replacing an old mutt with a younger one.”

What Barbra Streisand meant by diversity, observes Goldberg, are people “who agree with me.”

Today’s concept of diversity is blindly accepted and self-contradictory. It is too often a scheme to manipulate people for political objectives. What makes it concerning is that it is used by the socially powerful to forward an agenda.

As Thomas Sowell quipped, “The next time some academics tell you how important diversity is, ask how many Republicans there are in their sociology department.

One agenda that the diversity police forward today is same-sex marriage and woe to anyone who believes otherwise. It is simply inconceivable to them that one can simultaneously support man-woman marriage and be inconclusive. To embrace diversity in this new sense is to embrace a very rigid set of ideas and absolutely forbid, trample and punish others.

Make no mistake that sexual revolutionaries want to de-Christianize America—or at least dilute the faith so its sexual standards are abandoned. Christianity is in their cross-hairs.

Where does this go?

Dawn Stefanowicz gives this warning from Canada: “In Canada, freedoms of speech, press, religion, and association have suffered greatly due to government pressure. The debate over same-sex marriage that is taking place in the United States could not legally exist in Canada today. Because of legal restrictions on speech, if you say or write anything considered “homophobic” (including, by definition, anything questioning same-sex marriage), you could face discipline, termination of employment, or prosecution by the government.

She continues: “In Canada, it is considered discriminatory to say that marriage is between a man and a woman or that every child should know and be raised by his or her biological married parents. It is not just politically incorrect in Canada to say so; you can be saddled with tens of thousands of dollars in legal fees, fined, and forced to take sensitivity training.

“Anyone who is offended by something you have said or written can make a complaint to the Human Rights Commissions and Tribunals. In Canada, these organizations police speech, penalizing citizens for any expression deemed in opposition to particular sexual behaviors or protected groups identified under “sexual orientation.” It takes only one complaint against a person to be brought before the tribunal, costing the defendant tens of thousands of dollars in legal fees. The commissions have the power to enter private residences and remove all items pertinent to their investigations, checking for hate speech.

“The plaintiff making the complaint has his legal fees completely paid for by the government. Not so the defendant. Even if the defendant is found innocent, he cannot recover his legal costs. If he is found guilty, he must pay fines to the person(s) who brought forth the complaint.

“If your beliefs, values, and political opinions are different from the state’s, you risk losing your professional license, job, or business, and even your children.”

It is not a little thing that Matt Holland received this condemnation because he signed an amicus brief supporting marriage. It is part of a trend that is well under way, trampling people in the name of something which should be beautiful—diversity.

In some instances it is just pressure tactics, like this, but in others the full force of government weight with its power to punish will be used to quiet those who believe in the Christian sexual ethic and marriage.

If same-sex marriage becomes the law of the land, we have to wonder why the complete obliteration of dissent has to follow.

To answer Ben's comment yes this is Latter day mainstream. I have a nephew who has come out of the closet after knowing the truth serving a mission and I am 60 and face sexual temptation in the world everyday and I pray for strength to stay honorable to the Lord each day. Now there is diversity in my family and I pray each day for my nephew that he will repent and follow the commandments, the Lord has allowed mankind free agency which is real diversity thru out the ages and I will be forever thankful that Heavenly Father and Jesus are leading the way for our eternal happiness. Cheers

Are the comments here supposed to represent "mainstream" Latter-day Saint thought? Our church has given us a website outlining exactly how we should approach the topic of homosexuality, as well as how we should treat our gay and lesbian brothers and sisters: www.mormonsandgays.org.