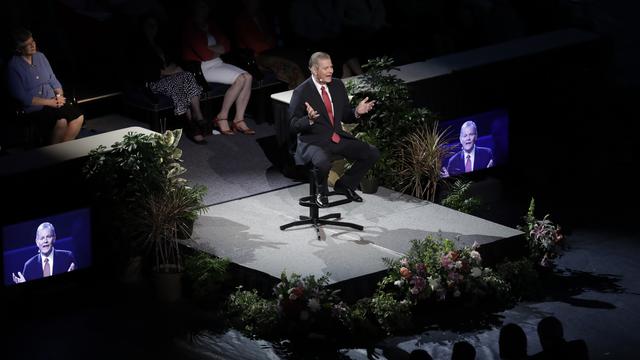 “We live in a unique world, with the ability to preach the gospel of peace literally at our fingertips,” said Elder Gary E. Stevenson of the Quorum of the Twelve Apostles of The Church of Jesus Christ of Latter-day Saints at the BYU Women’s Conference.

The Mormon apostle spoke about the Church’s use of technology and social media to share the gospel. He was the concluding speaker at the two-day annual event in Provo, Utah, May 5, 2017.

“There are so many applications for the use of technology in appropriate and inspired ways. We should do all we can to teach the righteous use of technology to the rising generation, and warn and prevent the unrighteous use and associated hazards as well. This should help ensure that the benefits of technology will outweigh the associated risks,” Elder Stevenson told the large crowd assembled at the Marriott Center. “Ours is the message of peace. You are the lovely messengers that preach it. And you can do this through these new and exciting channels of technology.”

“Historically, advancements in print and the invention of radio and TV enabled the message of the Restoration (of the gospel of Jesus Christ) to go throughout the world,” he said.

Elder Stevenson said the Church has been adopting new technologies to build The Church of Jesus Christ since it was organized in 1830. That same year, 5,000 copies of the Book of Mormon were printed. Since that time, more than 175 million copies have been printed in many languages.

He said the Church officially began using the internet as a messaging and communication vehicle in 1996 when LDS.org was launched for members. The website receives over 24 million new visitors a year and over 1 million average visitors each week. In addition, Mormon.orgreceives over 16 million visitors a year, primarily those not of the faith.

“Beginning in about 2010, the Church began an earnest adoption of use of social media to accomplish ‘spreading the knowledge of a Savior’ (Mosiah 3:20),” Elder Stevenson reported.

For example, he pointed to an Easter Twitter post by Elder David A. Bednar of the Quorum of the Twelve that was viewed 210,000 times.

He said the Church’s Missionary Department is also exploring “practical ways” social media can be utilized by missionaries in the field. The Church also released its first app for smartphones in 2007.

Elder Stevenson cautioned, “The world usually is just not as bright as it appears on social media. Nevertheless, there is much good that has and will come through these new communication platforms.”

He said, “[Social media] is often filled with beautiful images of home decor, wonderful vacation spots and elaborate food preparation. The danger of course is that many become discouraged that they seemingly don’t measure up to this idealized virtual reality.”

The senior Church leader also warned that the use of social media and mobile apps may be time consuming and lead to less face-to-face interaction that may harm the development of social skills in many young people.

Elder Stevenson continued, “The hazards associated with inappropriate content cannot be understated. There is an increasing epidemic of pornography addiction in society, which is negatively affecting and victimizing even Church members and families.”

“I would like to invite each of you to more fully consider your role to preach the gospel of peace,” he concluded. “May each of you have the courage to blog, pin, like, share, post, friend, tweet, snap and swipe up in a way that will glorify, honor and respect the will of our loving Heavenly Father.”