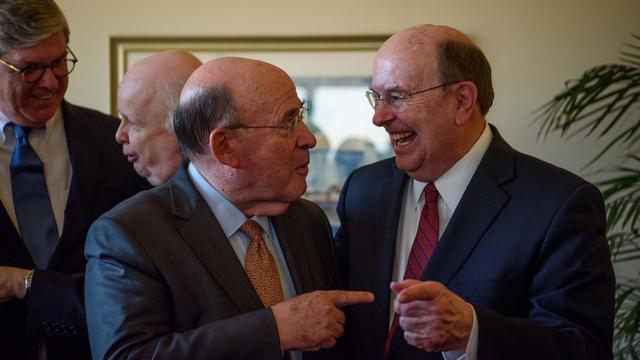 At a small gathering of Jewish and Mormon leaders last October, one Jewish dignitary labeled the event the “beginning of a beautiful friendship” between the two faiths.

Consul General of Israel in New York, Dani Dayan, and the New York Board of Rabbis hosted a reception attended by more than 60 people as part of an ongoing series of relationship-building meetings between Latter-day Saints and Jews.

“The bonds between the Jewish community and the Mormon community are so deep and so clear in many of our values and customs and the things we cherish,” Dayan told the group. “I am looking forward to having a deeper and deeper relationship between us. Utah is not in my jurisdiction, but in the area I am in charge of I will do whatever I can to make sure that bond goes on and on.”

Mormon representatives present included Elder Quentin L. Cook of the Quorum of the Twelve Apostles, along with his wife, Mary, and Elder Gerrit W. Gong of the Presidency of the Seventy and Bishop Dean M. Davies of the Presiding Bishopric and his wife, Darla.

Elder Cook said the relationship between Jews and Mormons is close in part “because our theology is so significantly tied.” He spoke gratefully of the opportunity he and a few others present Wednesday night had in October 2016 to honor the 175th anniversary of an early Mormon apostle’s journey to Jerusalem. The aim last October was not only to commemorate that anniversary, Elder Cook said, but also to cultivate a budding friendship and a joint desire to participate in future humanitarian projects.

“We treasure this relationship,” Elder Cook said. “We think there are many things that can happen [by working together].”

“Each has a fundamental focus on family. Each places a very high value on education. Each has a strong commitment to charitable giving. Each demonstrates humanitarian concern and response when there are international catastrophes such as earthquakes, hurricanes and tsunamis around the globe. Each has a history of disproportionate success, ability, hard work and determination, and each has been subjected to fierce persecution and prejudice.”

Another Jewish leader present Wednesday and last October was Rabbi Joseph Potasnik, executive vice president of the New York Board of Rabbis. He spoke warmly of Latter-day Saints, calling them a people gifted at caring for the poor and skilled at “watching out for opportunities to do more.”

“We came tonight in a spirit of collegiality and camaraderie, but let’s do one more together, again,” Rabbi Potasnik said. “We have wonderful friends in the Mormon community and with other denominations. I think sometimes we don’t recognize how deep some of those friendships are. We’re going to be doing more together.”

Read more about last year’s gathering of Mormon and Jewish leaders in Jerusalem.