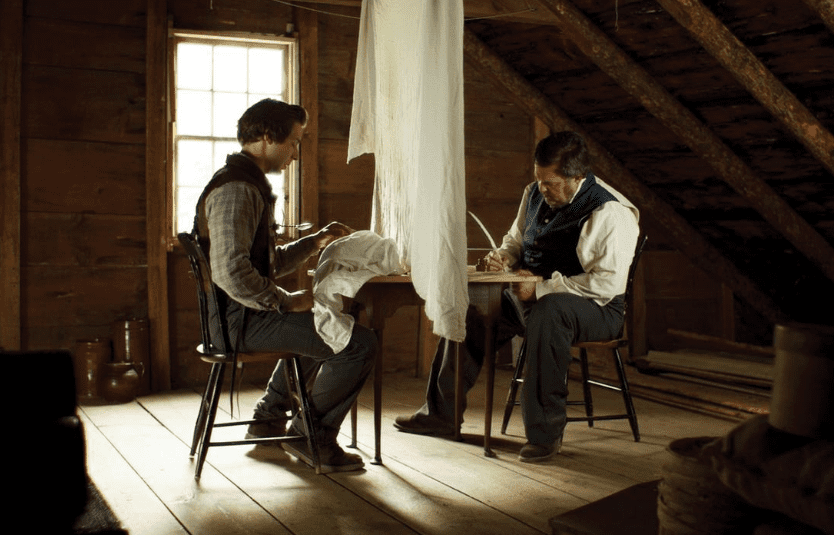 I asked my class of seniors in college which of these words they knew. Few recognized more than two.

When Joseph Smith presented the world the Book of Mormon in 1829, at age 23, he was a senior at Oxford studying English, theology, history and philosophy… Hold on. Actually, he had less than 6 years of “book learning” – probably a 5th grade education at best. Instead of school, he had plenty of years pulling stumps and farming, not exactly the resume of a writer. He had little reading education. While that word list was far more common in the vocabulary of the early 1800’s, these words were not used much when milking a cow.

His multiple scribes had far more education and all declared that Joseph dictated the Book of Mormon to them in about 65 days.

It strains credulity to suggest Joseph Smith penned it. Of all the explanations critics give for the creation of the Book of Mormon, the least credible is Joseph writing the manuscript. He could NOT have written nor translated the Book of Mormon in the way humans have long translated.

Some say he must have had another manuscript that he read from. But, as all evidence and first-hand accounts show, Joseph sat in the dark. He had no or little natural light and no candles. Perhaps he had an eidetic memory, but that is implausible considering the volume of text and no proclivity for such memory shown before or after the transcription process.

No other text like the Book of Mormon exists anywhere. No one has ever claimed authorship then or now. One might wonder with the printing/selling of millions of copies of the Book of Mormon, greed for deprived royalties would stimulate someone to lay claim that his relative wrote it. But no one claims authorship. How strange is that, especially with such a polarizing, controversial figure as Joseph Smith – a life that eventually cost him his life.

To the point, Joseph Smith could not have written the Book of Mormon for at least the following seven literary reasons:

1. Lexicon. The Book of Mormon lexicon or vocabulary and complexity of writing style is that of an Elizabethan Era scholar of the early 17th Century – 200 years before Joseph Smith. See again the list at the beginning of the article. They are all found in the Book of Mormon. Joseph would have had to be familiar enough with this lexicon to properly inject them into the story. Not surprising, censure, consignation, cumber, durst, exult, impenitent, indolence, lamentation, lasciviousness, penitent, solemnity, stratagem, are properly used in the Book of Mormon.

2. Complexity of plotting, foreshadowing, and irony arguably at least or even more advanced than the famous Victorian Era writers such as the Bronte sisters, G. Elliot, Austen, Dickens, Thackery, and Hardy. These writers were either contemporaries of Joseph Smith or lived shortly after he died. He never met any of them and there’s no record he ever read a word they wrote.

3. Differing writing styles rarely seen (if ever) in any single book. The author’s voice changes in numerous locations in the Book of Mormon, not only from book to book but in multiple places where Mormon injects his thoughts in his complex, educated writing style with multiple clauses in lengthy paragraphs. We begin with a lamenting and anxious Nephi who is more concerned about revelations than history, followed by a less emotional Jacob. A bizarre Cliff Notes of Nephite culture bridges Jacob to the more soaring narrative by Mosiah. Alma provides numerous historical personal stories and great insights to human character. Later, when Moroni takes over, the writing is more clipped or succinct with shorter sentences and paragraphs. Steinbeck only accomplished this once in any book: midway through Grapes of Wrath, for one chapter. Hemingway, Hardy and Shakespeare’s writings are uniform – one writer.

4. Complex and memorable character development with more than 300 distinct characters, many of whom are only briefly mentioned; some quickly stated in reference but many others who leave a lasting impression. The skill of memorable characterization is rare. Lasting images of Korihor, Zeezrom, Pahoran, Coriantumr, Nephi the Greatest Prophet, Samuel the Lamanite, Nehor, Gadianton, Kishkumen, Sariah, queen Lamoni the Most Faithful, Isabel, Abish, Amulek, Hagoth, Teancum, Helaman and his warriors, Anti-Nephi-Lehies, Amalickiah, King Noah, and of course, the many central characters including Nephi(s), Lehi, Alma(s), Capt. Moroni, Mormon and Moroni the last. Only a skilled, experienced novelist could have managed a portion of this litany of characters.

5. Use of advanced allegory. No allegory in world literature is as complex, multi-layered and profound as the Allegory of the Olive Orchard. The New Testament even refers to it but writes little of it. All other allegories, such as Pilgrim’s Progress, pale in comparison.

6. Distinct sermons on topics with depth abound in the Book of Mormon. Topics such as the mission of Christ and the atonement, resurrection, the condescension of God, redemption and repentance, chastity and overall morality, use and functions of the priesthood, liberty and responsibility. Again, bizarrely, Jacob excoriates people who practice polygamy. Kind of hard to link this with Joseph’s later practice. These are challenges for a schooled seminarian and preacher with years of practice.

7. Multiple themes interwoven around a central set of themes. “Go forth” and do with faith, the ubiquitous, all-important mission of Christ, challenge to live right and prosper, to stand for freedom, that wickedness never was happiness, the importance of keeping records, absolute morality, relative pain of death, loyalty, and more. Try to keep all of those relevant and consistent.

Bonus: No other book has a challenge to the reader to read it and challenge God to prove it wrong. It doesn’t want you to blindly believe but to “ponder” and ask God “if these things are not true…”

While it is true that given enough time a troop of baboons in an old typesetting print shop could create a Bible, one ought to look at Occam’s razor. Occam concluded that when examining any philosophical idea or scientific principle, when trying to figure out which of the explanations is right, it is most likely that the simplest one is the correct one.

If someone is an atheist, Moses seeing the finger of God write the 10 Commandments is absurd, let alone him later seeing God with 70 others. But if someone accepts that, parting the Red Sea, the Virgin Birth, turning water into wine, multiplying fish and loaves, resurrection, assumption, Stephen’s vision…then the simplest answer by far for the Book of Mormon is Joseph Smith, Emma Smith, Oliver Cowdery and eleven more people’s explanation: An angel named Moroni gave Joseph gold metal plates that he used (somehow – we really don’t know how they were used) to dictate the Book of Mormon in less than 90 days. All other explanations boggle the mind far more.

In the end, having read more than 1,000 books in literature, academic texts, popular novels, Shakespearean and other such plays, I find reading the Book of Mormon far more intriguing, daily and spiritually relevant, amazingly scripted and plotted, and more memorable than all the rest of the non-divine books. Only the New Testament, much of the Old Testament, the Pearl of Great Price and The Doctrine and Covenants belong in the same league. Individually and together they bring illumination.

Mr. Stoddard, how can you not know how Joseph Smith translated the Book of Mormon? He used the urum and thumum (I don't think that's the right spelling) to translate the writings of the prophets that were on the gold plates.

I have long marveled at many aspects of the Book of Mormon. Mark does a great job of capturing things I’ve been thinking about through many many readings of the Book of Mormon over my lifetime. I’ve been spending a lot of time with my Sunday School students on many of these aspects. BUT, as marvelous as these things are, I always end my lessons with the idea that none of this really matters UNLESS we actually take up Moroni’s promise. If we do that, and persevere until we have our answer, all of this and much more will become so much more meaningful than we can comprehend prior to doing that. Great job Mark!