Lesson 16: "I Cannot Go Beyond the Word of the Lord" | Meridian Magazine 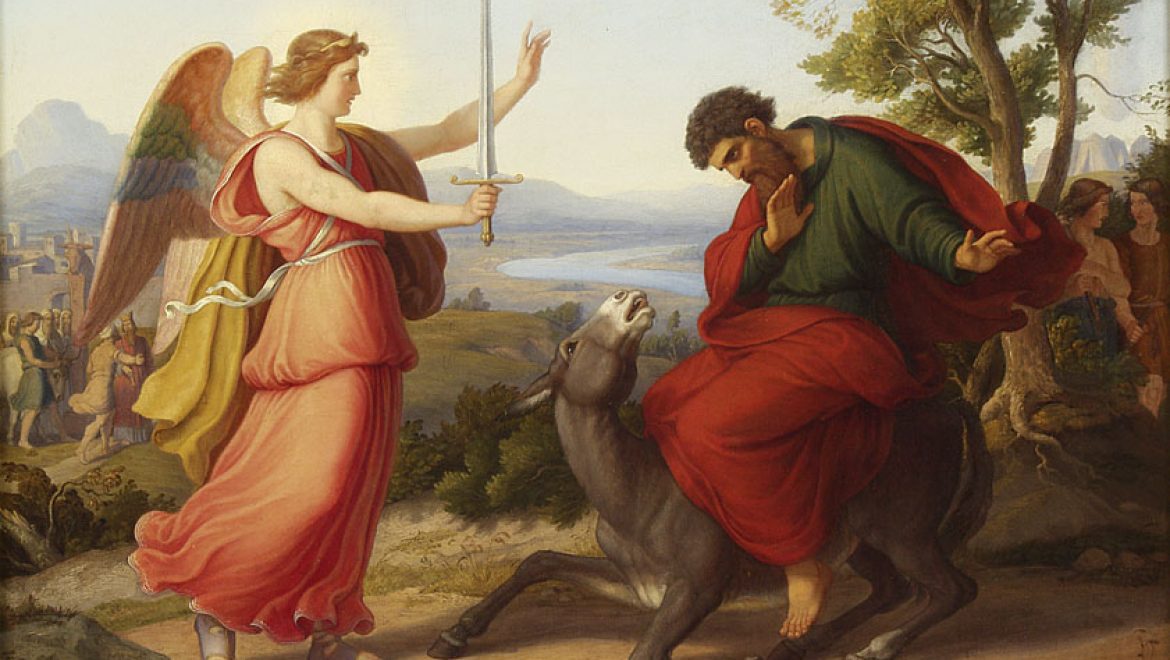 Lesson 16: “I Cannot Go Beyond the Word of the Lord”

Cover image: “Balaam and the Angel” by Gustav Jaeger.

The story of Balaam (pronounced bala’am) is given considerable attention in the Book of Numbers (three full chapters!). Because of his actions, Balaam is universally condemned in the scriptures for two reasons. First, his greed for wealth (see Deut. 23:4; Neh. 13:2; 2 Pet. 2:15; Jude 1:11). Second, because he led Israel into apostasy through the enticement of Ba’al worship (see Rev. 2:14).

Who Was Balaam?
Toward the end of the forty years of wandering, the children of Israel proceeded north on the eastern side of the Dead Sea. As they did, the passed through the land of Moab. The king of Moab was Balak, who “was sore afraid of the people, because they were many: and Moab was distressed because of the children of Israel” (Num. 22:3). Balak did not feel that their military would be able to stop the advance of the Israelites, therefore he sought for help through pagan divination. “He sent messengers therefore unto Balaam the son of Beor to Pethor, which is by the river of the land of the children of his people, to call him, saying, Behold, there is a people come out from Egypt: behold, they cover the face of the earth, and they abide over against me: Come now therefore, I pray thee, curse me this people; for they are too mighty for me: peradventure I shall prevail, that we may smite them, and that I may drive them out of the land: for I wot that he whom thou blessest is blessed, and he whom thou cursest is cursed (Num. 22:5-6).

Balaam was a Mesopotamian diviner (Deut. 23:4) who had an international reputation. His name has actually surfaced in extra-biblical literature recorded within a few hundred years after the biblical story. In 1967, an archeological expedition in Deir Allah, Jordan, discovered fragments of an inscription written in Aramaic written about 850 B.C. In these texts, Balaam is referred to as a “seer of the gods”. Similar to the biblical account, Balaam received communications from gods at night and then rose in the morning to reveal them (see “Deir ‘Alla, Tell” in The Anchor Bible Dictionary, 6 vols., Ed. David Noel Freedman [New York: Doubleday, 1992], 2:126-130).

The Blindness of Wealth
Balak’s messengers made the long journey to residence of Balaam where they laid before him Balak’s petition to come to Moab and pronounce curses upon Israel. Balaam asked the messengers to wait the night “as the LORD shall speak unto me” during the night (Num. 22:8). It was believed that diviners could speak for any god. The Lord told Balaam: ” Thou shalt not go with them; thou shalt not curse the people: for they are blessed” (Num. 22:12). In the morning, he told Balak’s messengers: “Get you into your land: for the LORD refuseth to give me leave to go with you” (Num. 22:13). They returned to Balak and informed him of Balaam’s refusal.

Balak was not to be denied. He sent different messengers, “more honourable” than the first, offering Balaam any amount of wealth and honors he desired if he would come to Moab and curse Israel. Balaam answered, “If Balak would give me his house [palace] full of silver and gold, I cannot go beyond the word of the LORD my God, to do less or more” (Num. 22:18). Once again, Balaam told Balak’s messengers to stay the night in order to learn God’s will concerning their request. God spoke to Balaam that night saying, “If the men come to call thee, rise up, if thou will go with them; but yet the word which I shall say unto thee, shalt thou speak” (JST Num. 22:20) With a heart set on the wealth offered him, “Balaam rose up in the morning, and saddled his ass, and went with the princes of Moab” (Num. 22:21).

This story reminds us of Joseph Smith pleading with the Lord to allow Martin Harris to have the 116 pages of the Book of Mormon manuscript which were eventually lost. We better be careful for what we ask for we might get it and it “turn[s] unto [our] condemnation” (D&C 88:65). Elder Bruce R. McConkie wrote: “I wonder how often some of us get our direction from the Church and then, Balaam-like, plead for some worldly rewards and finally receive an answer which says, in effect, If you are determined to be a millionaire or to gain this or that worldly honor, go ahead, with the understanding that you will continue to serve the Lord. Then we wonder why things don’t work out for us as well as they would have done if we had put first in our lives the things of God’s kingdom?” (“The Story of a Prophet’s Madness,” New Era, Apr. 1972, p. 7).

Miraculously, “the LORD opened the mouth of the ass, and she said unto Balaam, What have I done unto thee, that thou hast smitten me these three times?” Being blinded by the allurement of wealth, Balaam was indifferent to that which would have stunned a normal person. Instead, Balaam “said unto the ass, Because thou hast mocked me: I would there were a sword in mine hand, for now would I kill thee.”

“Then the LORD opened the eyes of Balaam, and he saw the angel of the LORD standing in the way, and his sword drawn in his hand: and he bowed down his head, and fell flat on his face.” Balaam said to the Lord, “I have sinned; for I knew not that thou stoodest in the way against me: now therefore, if it displease thee, I will get me back again.” However, the Lord told Balaam, “Go with the men: but only the word that I shall speak unto thee, that thou shalt speak. So Balaam went with the princes of Balak.” (Num.22:23-35) Balaam did as he was told.

No Curses, Only Blessings
When Balak heard Balaam had come to Moab, he went to him and said, “Did I not earnestly send unto thee to call thee? wherefore camest thou not unto me? am I not able indeed to promote thee to honour?” Recalling the lesson learned on his journey, Balaam responded that though he had made the long journey, he could only say what “God putteth in [his] mouth” (Num. 22:37-38).

Balak took Balaam to a high place where he could view the children of Israel. In the tradition of Mesopotamian diviners (as attested in various Babylonian tablets), Balaam had seven altars built upon which seven bulls and rams, the most prized and valued offerings, were sacrificed (Num. 23:1-2). In so doing, Balaam was attempting to secure a favorable oracle from the Lord in behalf of the Moabites. Standing alone on a barren high place, Balaam received the an oracle from God, but not to the liking of king of Moab. Rather than a curse, a blessing was given (Num. 23:7-10).

Angered, Balak said. “What hast thou done unto me? I took thee to curse mine enemies, and, behold, thou hast blessed them altogether.” Balaam relied, “Must I not take heed to speak that which the LORD hath put in my mouth?” (Num. 23:11-12).

Once again, Balak urged Balaam to curse Israel. Going to another high place, the ritual of divination was repeated. Once again, Balaam blessed Israel rather than cursed them (Num. 23:13-24). This scene was repeated a third time with the same result (Num. 23:27 – 24:9). The third time was too much for Balak.. “And Balak’s anger was kindled against Balaam, and he smote his hands together: and Balak said unto Balaam, I called thee to curse mine enemies, and, behold, thou hast altogether blessed them these three times. Therefore now flee thou to thy place: I thought to promote thee unto great honour; but, lo, the LORD hath kept thee back from honour.” But “Balaam said unto Balak, Spake I not also to thy messengers which thou sentest unto me, saying, If Balak would give me his house full of silver and gold, I cannot go beyond the commandment of the LORD, to do either good or bad of mine own mind; but what the LORD saith, that will I speak?” He then told Balak that he would leave Moab and return to his own country (Num.24:10-14). Before he left however, Balaam warned Balak that Israel “shall smite the corners of Moab” and become a strong and mighty people (Num. 24:15-19).

The Seduction of the Israelites
Satan never quits in his war against the Lord’s people. When one tactic fails another is employed. With Balaam unable to bring curses upon Israel, another method to stop the advance of the Lord’s people was suggested. And the suggestion came from Balaam himself! In this role, Balaam was at his worse.

Through the advice of Balaam (Num. 31:16), Moab seduced the children of Israel into participating in the fertility cult associated with Ba’al worship. “And Israel abode in Shittim, and the people began to commit whoredom with the daughters of Moab. And they [Moabite women] called the people unto the sacrifices of their gods: and the people [Israelites] did eat, and bowed down to their gods. And Israel joined himself unto Baalpeor” (Num. 25:1-3). Balaam knew through the blessings he had pronounced upon Israel that other nations could not destroy Israel. But he also knew that if Israel would become morally corrupt and “whore after other gods”, then God would withdraw the blessings he pronounced upon them. Then Israel would become vulnerable to their enemies.

Balaam’s part in this revolting story has been repeated at other times in scriptural history. To the church in Pergamos, one of the seven churches to whom the Book of Revelation was written, the Lord said: “But I have a few things against thee, because thou hast there them that hold the doctrine of Balaam, who taught Balac to cast a stumblingblock before the children of Israel, to eat things sacrificed unto idols, and to commit fornication” (Rev. 2:14). Elder Bruce R. McConkie taught that the doctrine of Balaam is “To divine for hire; to give counsel contrary to the divine will; to pervert the right way of the Lord — all with a view to gaining wealth and the honors of men. In effect, to preach for money, or to gain personal power and influence. In the very nature of things such a course is a perversion of the right way of the Lord” (Doctrinal New Testament Commentary: Colossians-Revelation, [Salt Lake City: Bookcraft, 1973] p. 451).

Conclusion
What a story! “Balaam, the prophet, inspired and mighty as he once was, lost his soul in the end because he set his heart on the things of this world rather than the riches of eternity.

“What a wealth of meaning there is in these inspired words of Joseph Smith, words addressed to people who have testimonies but want to mingle the things of this world with them: ‘Behold, there are many called, but few are chosen. And why are they not chosen?

“‘Because their heads are set so much upon the things of this world, and aspire to the honors of men, that they do not learn this one lesson–

“‘That they may be conferred upon us, it is true; but when we undertake to cover our sins, or to gratify our pride, our vain ambition, or to exercise control or dominion or compulsion upon the souls of the children of men, in any degree of unrighteousness, behold, the heavens withdraw themselves; the Spirit of the Lord is grieved; and when it is withdrawn, Amen to the priesthood or the authority of that man.

“‘Behold, ere he is aware, he is left unto himself, to kick against the pricks, to persecute the saints, and to fight against God. .