Lesson 3: "The Vision of the Tree of Life" | Meridian Magazine 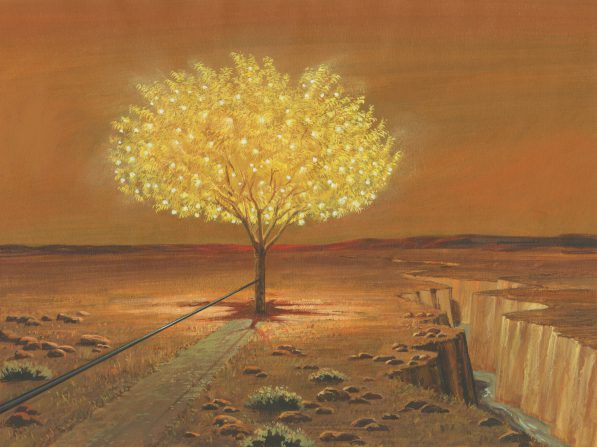 Lesson 3: “The Vision of the Tree of Life”

Even as Joseph of Egypt, his forebear, Lehi was a dreamer. Dreams and visions had shown him the impending destruction of Jerusalem and the coming of the Messiah. Obedience to the Lord’s command in a dream led him away from his homeland. Now Lehi was about to have another transcendent dream which was in part a response to something on his mind-seed. As chapter 8 opens, Lehi and his family are gathering seed of every kind to take into the wilderness, but a parallel theme is sounded here. Earlier the Lord had told him that “his sons should take daughters to wife, that they might raise up seed unto the Lord” (1 Nephi 7:1) Lehi has two rebellious sons, Laman and Lemuel. What will become of his seed as their family travels toward a promised land where a new civilization will be established?

His marvelous dream is, in part, a response to those worries. It is a vision of comfort and expanse, centered on the tree of life, an archetypal image so expressive of life’s ultimate spiritual meaning that it appears in many ancient cultures. Some scholars suggest that it is under a tree of life that Buddha sat; they say the Jewish menorah is another form of the tree.

The centerpiece of the dream is a tree of exceeding beauty “whose fruit was desirable to make one happy”(8:11). This fruit is so delicious, so exquisite that it brings exceeding joy. Indeed, in Joseph Smith Sr.’s similar dream, the fruit is so enormously enjoyable–beyond anything in this world–that “the more we ate, the more we seemed to desire, until we even got down upon our knees and scooped it up, eating it by double handfuls.” What is this tree that is so irresistibly delicious? Our quick answer is the “love of God,” which is indeed correct, but a more detailed answer is given Nephi in chapter 11 when he, too, sees this tree whose “beauty was far beyond, yea exceeding of all beauty” (11:10). Then he is told what the tree represents as the Spirit shows him the Son of God–his condescension to come to earth, his life, and sacrifice. The tree of life is a symbol of Jesus Christ whose coming here is the ultimate expression of God’s love for us. “For God so loved the world that he gave his only begotten Son…” (John 3:16). The tree is the Savior and his atonement that is represented as so inexpressibly beautiful and sweet.

In this pivotal symbol of a tree converges all the meaning of the gospel. It was the tree of life that stood in the Garden of Eden and nourished Adam and Eve. This was a place of unity with each other and with the Lord. After they fell, eating the fruit of a forbidden tree, they came into a world of duality, division, separation from God. The only way to be at-one again with the Lord comes from the events that took place on another tree–the cross, through Christ’s atonement and resurrection. Some legends even claim the cross was constructed from a branch of the tree of life. Symbolically, at least, this is true.

The tree of life is mentioned again in Alma 32. This time the discussion centers on comparing the word (another designation for Jesus Christ) to a seed. If you plant the word or seed in your heart and nurture it with great diligence and patience, “it shall take root; and behold it shall be a tree springing up into everlasting life” (Alma 32:41).

Notice how personal the idea of eating of the fruit is. Something you eat becomes a part of you. It transforms your very system. Christ’s mission has done the same for us, transforming us from what we were before to a new person–born again.

The fruit of this tree of life was so delicious that Lehi didn’t want to enjoy it alone but immediately looked for his family members to come and eat too. The symbol here was not just of salvation but of an entire family coming to eternal life. Lehi was anxious that not one be lost. He wanted to gather the “seeds of every kind.”

Desert Images
The images that came to Lehi as he stood by the tree in his dream are those of a man of the desert. He saw a river of water leading to the tree and looked to see its source, as a desert dweller would. Then, he saw that many of those who pressed toward the tree became lost in a mist of darkness. The wanderer in the desert can be overtaken by thick, low-lying impenetrable mists that move rapidly through a region and blind all who would travel on.

On the other side of the river from the tree was “a great and spacious building …high above the earth…filled with people…in the attitude of mocking and pointing their fingers towards those who…were partaking of the fruit.” (1 Nephi 8:26,27). The building is high above the air because it has no foundation. These mockers who would belittle others are the very antithesis of Jesus Christ, and the kind of gulf that separates them from the righteous would have been a common sight in Lehi’s desert.

Nephi’s Response
When Laman and Lemuel heard of their father’s vision, they responded by arguing heatedly in their tent about what it meant. Nephi asked what to him was a most natural question, “Have ye inquired of the Lord?” (1 Nephi 15:8). He knew from the most intimate firsthand experience from the Lord from whom they could obtain answers–“Ask, and it shall be given unto you”–but their reply was telling. “We have not; for the Lord maketh no such thing known unto us” (15:9). That paradigm itself sealed their doom, was the mental filter through which all their experience would flow. Believing that the Lord would make no such thing known to them, they wouldn’t ask, wouldn’t trouble themselves, and their belief became its own self-fulfilling prophecy. Nephi would climb the mountain; they would grovel in the tent.

Nephi believed that “he that diligently seeketh shall find” and with that belief approached the Lord. His desire was intense and he was rewarded by being taken to an exceedinly high mountain and being asked a powerful question, “What desirest thou?” (11:1). He was taught as his father had been before him.

Hang in there, Gary. Everyone has fallen, some farther and faster than others and with variable degrees of injury. From someone who has been there and done that, trust me that the devout practice of the gospel has its ups and downs and difficulties, but it's worth the effort.

Hello, I have fallen, caught up in the darkest mist but with some very dear friends, various Stake Pres' I am on a long and arduous road back to Christ. I have spoken to the Crist centred and those who have no believe or can't fathom the gospel as the Chrch defines it. To understand even a little, I have found, as you state, 'have ye asked of God.' I still have the darkest of days sometimes and have to have a very real battle with myself and others in my life to once again be follow the Lord. I find it difficult at times but at the same time, so very rewarding. I know with God's help and my honest direction, I will become a member again. Very good article, I will be following you. Thank you, Gary