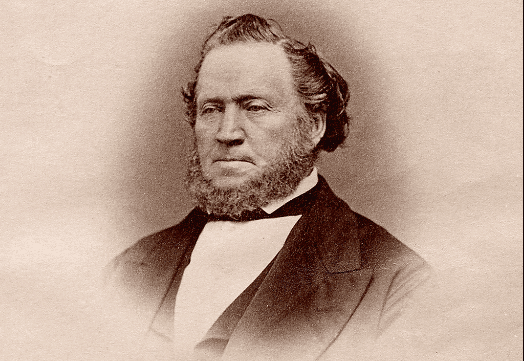 The Doctrine and Covenants is an invitation to all people everywhere to come unto Christ. In the revelations of this book “one hears the tender but firm voice of the Lord Jesus Christ,” inviting all to come unto Him “preparatory to his second coming.” [1]

Anciently, the Lord Jesus Christ gave to the Apostle Peter “the keys of the kingdom of heaven.” [2]   These keys are most precious, for they open or shut the gates of heaven. Without the keys, we are forever locked out of the presence of the Lord.  After citing this passage, Joseph Smith wrote that the keys given to Peter are the keys of the Holy Priesthood: “Now the great and grand secret of the whole matter … consists in obtaining the powers of the Holy Priesthood.” [3]

The priesthood is the authority to perform the ordinances that bring people to Christ. President Joseph F. Smith said that “the power of directing these labors constitutes the keys of the Priesthood. In their fullness, the keys are held by only one person at a time, the prophet and president of the Church … The President is the mouthpiece of God, the revelator, the translator, the seer, and the Prophet of God to the whole Church. It is he who holds the keys of this Holy Priesthood — the keys which unlock the doors of the Temples of God and of the ordinances of His house for the salvation of the living and the redemption of the dead.” [4]

Although the keys of the priesthood were taken from the Church anciently, they were restored to the Prophet by Peter, James, and John sometime in 1829. From that point on, Joseph’s life was devoted to building the temples where the key could be turned to admit the Saints to the presence of the Savior Jesus Christ.

Joseph knew that his time was short and that the keys must continue with the Church after he was gone. He announced in Nauvoo in August 1841, “that the time had come when the Twelve should be called upon to stand in their place next to the First Presidency.”  The Prophet met with the Twelve in the spring of 1844 to confer on them all of the keys and authority necessary to carry forward the work of the kingdom. “I roll the burthen and responsibility of leading this Church off from my shoulders on to yours,” the Prophet proclaimed. “Now, round up your shoulders and stand under it like men, for the Lord is going to let me rest a while.” [5]

This conferral of keys was in keeping with the revelation given in March 1835:

Of the Melchizedek Priesthood, three Presiding High Priests, chosen by the body, appointed and ordained to that office, and upheld by the confidence, faith, and prayer of the church, form a quorum of the Presidency of the Church.

The twelve traveling councilors are called to be the Twelve Apostles, or special witnesses of the name of Christ in all the world — thus different from other officers in the church in the duties of their calling.

And they form a quorum, equal in authority and power to the three presidents previously mentioned.” [6]

When he heard of the death of Joseph Smith in July 1844, Brigham Young was on a mission in Boston, Massachusetts. “The first thing which I thought of was, whether Joseph had taken the keys of the kingdom with him from the earth; Brother Orson Pratt sat on my left; we were both leaning back on our chairs. Bringing my hand down on my knee, I said the keys of the Kingdom are right here with the Church.” [7]

As presiding officer of the Quorum of the Twelve, Brigham Young was now leader of the Church. He later taught the Saints that the keys Joseph received from the Lord now rested with the Twelve:

You read in the revelation [D&C 107:22-24] that when the Twelve were called and ordained, they possessed the same power and authority as the three First Presidents. [8]

For the first time in the kingdom of God in the 19th century, without a Prophet at our head, do I step forth to act in my calling in connection with the Quorum of the Twelve, as Apostles of Jesus Christ unto this generation — Apostles whom God has called by revelation through the Prophet Joseph, who are ordained and anointed to bear off the keys of the kingdom of God in all the world … I tell you, in the name of the Lord, that no man can put another between the Twelve and the Prophet Joseph. Why? Because Joseph was their file leader, and he has committed into their hands the keys of the kingdom in this last dispensation. [9]

Although some Church members were uncertain about who should lead the Church, the Twelve knew that they held the keys Joseph had conferred upon them. In December 1847, the Twelve acted to organize once again the First Presidency and made Brigham Young President of the Church.

The Lord will not leave his righteous Saints without a Prophet, who by definition is one who holds the keys of exaltation and eternal life.

Before Moses was taken from the earth, he conferred the keys of prophetic leadership upon Joshua: “And Joshua the son of Nun was full of the spirit of wisdom; for Moses had laid his hands upon him.” [10]   The Lord honored this conferral: “The Lord spake unto Joshua the son of Nun, Moses’ minister, saying, Moses my servant is dead; now therefore arise, go over this Jordan, thou, and all this people, unto the land which I do give to them, even to the children of Israel … There shall not any man be able to stand before thee all the days of thy life: as I was with Moses, so I will be with thee: I will not fail thee, nor forsake thee.” [11]

What is true of the Prophet is true of the people. If they remain faithful, they will have the living oracle of God among them: He will not fail nor forsake them. Only when the people of the Lord no longer honor or merit those keys are they taken from them. [12]

The new prophet, Brigham Young, spoke with authority when he said: “The errand of Jesus to earth was to bring his brethren and sisters back into the presence of the Father; he has done his part of the work, and it remains for us to do ours.” [13]

The faithful Saints of Brigham Young’s time followed him both spiritually and literally — in one of the great migrations of the people of God — across the Great Plains of North America into the Rocky Mountains to a new home and a new temple.

Like them, let us not fail today to follow our file leader, the living Prophet of God, back to our Father in Heaven and His Son, Jesus Christ.

[5] Teachings of Presidents of the Church: Brigham Young, 6.

[8] Teachings of Presidents of the Church: Brigham Young, 139.

[9] Teachings of Presidents of the Church: Brigham Young, 7.

[13] Teachings of Presidents of the Church: Brigham Young, 32.