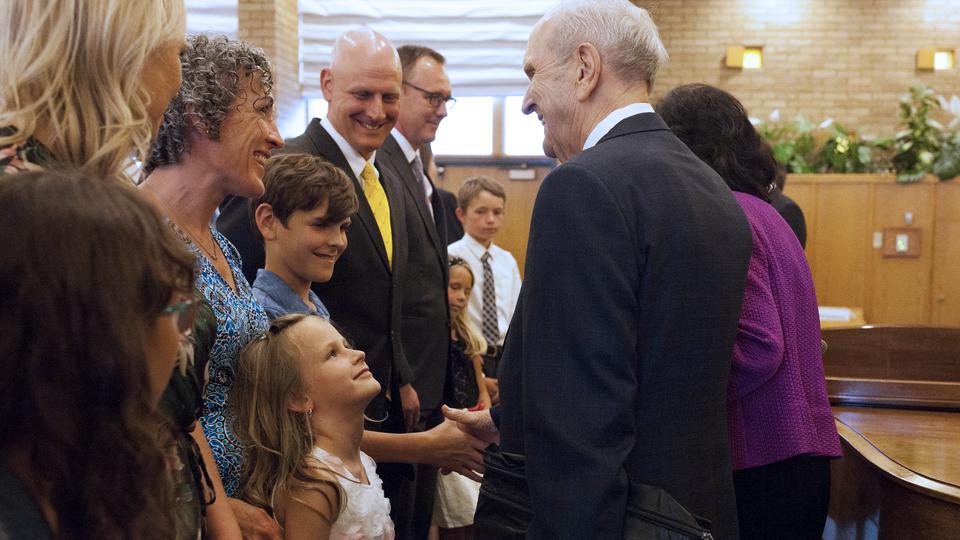 Members of The Church of Jesus Christ of Latter-day Saints in Alberta, Canada, were recently privileged to hear from Church President Russell M. Nelson. President Nelson and his wife, Wendy W. Nelson, were joined by senior church leader Elder Ronald A. Rasband and his wife, Melanie T. Rasband.

Church leaders spoke in three locations — Edmonton, Calgary and Raymond — over three consecutive days, with broadcasts into Church buildings in each respective area throughout the province. On Friday, June 8, 2018, the delegation, led by President Nelson, spoke in Alberta’s capital city of Edmonton.

Marilynne McMullin said, “What a warm and welcoming evening. I enjoyed the messages given by all the speakers. I particularly liked President Nelson’s rapport with the youth. He spoke directly to them and gave them challenges. My 12-year-old grandson was there with pen and paper, writing all the scriptural references down for further study. It was a great evening.” “My testimony that President Nelson is a prophet was strengthened by this meeting. Hearing Sister Wendy Nelson testify of that truth was especially powerful, and the Spirit taught me many lessons about what it means to sustain Church leaders as she spoke. Her words also enlightened my understanding of marriage,” said Rhiannon De’ Vries.

On Saturday, June 9, 2018, leaders spoke in the Calgary region. The evening was also an opportunity for renewed acquaintance for Sister Nelson, who lived in Calgary for many years.

President Nelson bore a powerful witness of the Book of Mormon as he instructed the Saints in the seven stakes of the Calgary region. He testified that the Book of Mormon “is a gift from God to all of mankind. Guard it, know it, read it, study it, teach it and give God thanks for that great gift to us.” President and Sister Nelson spoke of some of the ways our Heavenly Father prompts, teaches and imparts doctrine to His living prophet. “I think we saw a bit of a glimpse into the personal workings of the Spirit on the prophet and his wife. That is something that we rarely hear,” stated Brent Laycock, a member of the Calgary Stake.

Finally, President Nelson invoked an apostolic blessing upon those who had gathered for this historic devotional. “That was a special moment for me! Whether we were in his presence or at another building watching him from a screen, I felt as if he laid his hands upon my head and that apostolic blessing was meant for me,” said Sister Sherry Walford, a member of the Calgary Foothills Stake.

On Sunday, June 10, 2018, the delegation concluded their tour by speaking in Sister Nelson’s hometown of Raymond.

The devotional contained messages that were both inspiring and timely. Sister Rasband spoke about the importance of being obedient and stepping up our efforts to strengthen the Church in these challenging times, and Elder Rasband provided examples of President Nelson’s recent teachings to the adults and youth of the Church. Sister Nelson shared special memories of growing up in Raymond and mentioned that she and President Nelson visited the Raymond Cemetery, where five generations of her family are buried. She also bore her personal witness that her husband has been called by the Lord to be the prophet to the Church.

President Nelson encouraged those in attendance to study the scriptures and be good examples to those around them. He invited all to be kinder to one another and advised married couples not to stop courting each other.

The devotional had a powerful impact on those in attendance. Calli Orr, 21, said, “Recently I have been feeling overwhelmed by the unknown in my future, and during this devotional I had the impression to be optimistic and expect revelation. I’m grateful for the increased motivation and optimism I received.”

Avery Beckstrand, 18, said, “I felt very blessed to be able to hear such direct instruction from the prophet of our Church. I felt empowered and inspired to put in extra work in the gathering of Israel. The opportunity to engage so closely with the prophet and an apostle of the Lord helps me feel the love God has for us and feel an increase in individual worth.”

Jenna Anderson, one of those who heard from President Nelson in Edmonton, said, “I just think it’s really special that the prophets and other leaders make time to personally visit members in so many areas of the world. It makes me feel special, known and loved. And to receive guidance specifically for us in this area is so powerful!”

It would be nice to hear what President Nelson, Sister Nelson, and Elder Rasband actually said rather than imprecise summaries and the reaction of those fortunate enough to have been there. I would much rather have quotes of what they said or paraphrases than rather than broad descriptions that leave one wishing Rosemarie hear what they said.

That was an unintended technical error, thank you so much for bringing it to our attention. It has been changed to the proper author now. Thank you for all your great work.