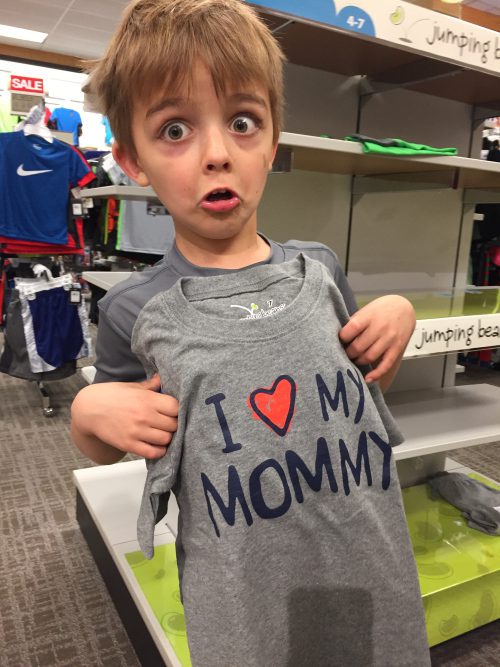 Chelsea Dyreng is a guest contributor to Meridian Magazine.

If there is one thing that gives me panic attacks it is reading parenting books.

Once I read one about raising sons. In it the author encouraged mothers to develop a Look. Some kind of glance, some sort of frown, some frigid, I-am-this-close-to-mailing-you-to-Australia facial expression that would strike instant repentance in the heart of even the most mischievous boy. I practiced The Look in the mirror until I scared myself, and then vowed to incorporate The Look into my parenting as soon as the opportunity presented itself.

Recently I took my kids up to D.C. to see the sights with my sister. My husband had a business conference and could not join us, so it was I, the single mother, who felt the awesome responsibility of preserving her offspring from a myriad of metropolitan dangers.

I wasn’t worried about my three older daughters (a mistake, as you will soon see), since it was my two younger sons (ages 6 and 2) that were the main source of my anxiety.

The Look was a major part of my method.

First, there were the metro trains. (Don’t get too close to the tracks–you’ll get electrocuted. Hurry on, hurry off–you don’t want to be left on the train by yourself! Don’t stick your hand out and touch the trains while they are moving, unless you want to look like a pirate for the rest of your life. STAY RIGHT HERE ON THIS LINE until I am done with this gosh-dang-it-ticket machine.)

And there were the streets. (Get off that ledge. Look both ways. Just because you can see the car doesn’t mean it can see you. Hold my hand. I’m serious, you have to hold it or your head will be smashed like a pumpkin.)

And there were the museums. (Stay by me. Don’t get separated. Don’t climb on the statue. Wash your hands. Don’t crawl under the bathroom stalls! Wash your hands again. Please.)

All the while The Look was heavily employed.

Then we went to the International Spy Museum, and while I was engrossed in Looking at my two younger sons, my phone buzzed. It was my 9-year-old daughter calling from a stranger’s cell phone, informing me that she had been lost . . . .for the last 45 minutes.  I eventually found her, teary and trembling, in the part of the museum called “Behind Enemy Lines.”

After that I hovered over everyone, slathering The Look over my children like poisoned peanut butter, and after three days of non-stop anxiety in Washington, D.C. The Look had become my face. I felt like was trying to gather my children like a protective hen gathers her chicks, but to my children I seemed more like Cruella DeVille trying to gather puppies. It is no wonder that when we got on the Metro my kids fanned out among the seats to be as far away from me as possible. At one point my six-year-old son turned to me and said, “Next time we come to D.C. I want it to just be me and DAD.”

Another Reason to Hate Little Dogs and Love Little Boys

A couple weeks after the Washington D.C. Naggathon, it was Sunday and time for church. It was a rare morning when my husband didn’t have early meetings and we were going to go to church together as a family in one car! Yippie!

Normally I leave for church 45 minutes early, even though the church is 15 minutes away. Why? Because it takes 15 minutes to get from the door of our house into the car. I’m not sure why, but everyone, myself included, has to go back and get something, and sometimes several somethings, before we are actually settled in the car. And what about the other 15 minutes, you say? I also have to allow 15 minutes for the ritual “dog escape” that happens Every. Sunday. Morning.

Inevitably, when the door of the house is opening and closing so many times in succession the dog will find an opportunity to escape and then we have to catch him. The dog was getting faster and faster and running further and further until this particular Sunday when I had not allowed for my extra 15 “dog escape” minutes, and on cue, the dog escaped. There was no time for this circus, so I told everyone to get in the car anyway, the dog will just have to face the consequences of running away: abandonment. No food. No water. No love. For five hours. Because that is how long Mormons are at church. (We tell people it is three, but it is really five.)

But my son didn’t listen. “I’ll get him!” He shouted as he ran after the dog down the driveway. “No! Stop! Come back!” I called. I put my hands on my hips and gave him my most deadly Look but he was already gone, running across the street, up the hill, and disappearing into the trees.

Alas, we would have to take two cars after all. I took the rest of the kids to church, and left my husband to stay behind and find our son and dog.

Eventually my husband and son made it to church, and I silently noted that my son was wearing a different set of clothes that I had ironed and put on him that morning.

When I got home and found the original set of church clothes, caked with mud, on top of the washing machine, I couldn’t suppress my smile and admiration for a son who is willing to chase down a runaway dog no matter what the distance or terrain. What determination. What tenacity! What a great sense of responsibility. With all of those great virtues, who cares about obedience?

We recently went to Kohls and found the perfect shirt for Danny: As you can see, he was totally excited about it.

But we ended up getting him a shirt that says “Nothing But Awesome,” which is more his style.

As for The Look, after much experimentation I have found it is not very effective, for, not long after I had started using The Look I found that my son developed his own Look, so that when I narrow my eyes and draw my lips into a tight line, his smile widens, his eyes sparkle, his cheeks get all rosy and, ever so slightly, one eyebrow lifts.

Do you know how hard it is to glare at someone who looks at you like that? Especially when he has golden eyes and long black eyelashes?

So now here I am typing this at the foot of my son’s bed. He is asleep now, and since one cannot disobey when they are asleep, it is most likely he will live for at least another 12 hours.

How do six-year-old boys ever make it to seven? To ten? To sixteen? But then, when I am around people who have sixteen-year-olds it makes me oh so grateful Danny is still little enough that when we are mad at each other I can pick him up and flip him upside down and hold him until he is laughing.

Perhaps I am making this too complicated. Maybe instead of giving The Look I need to focus on giving The Smile.

Luckily, tomorrow is a new day. Tonight I will review my parenting approach, amend it, refine it, rehearse it, pray over it, etc. Perhaps I will even spend some time in front of the mirror and practice my smile. And tomorrow I will try again.

And if you see happen to see a child running though the streets after a dog, please send him home. You can keep the dog.

About the Author Chelsea Dyreng:

I am the daughter of a fireworks salesman and Miss Malibu. I am married to a Duke professor and together we are raising five God-fearing, book-loving, adventure-seeking kids. I live in North Carolina where I spend my free time writing novels and dreaming about Mexico.

You can find her blog at https://chelseadyreng.com

What a fun read. A lot of truth is said in jest. I still give 'the look', intermittent with smiles, to adult children and now grandchildren.