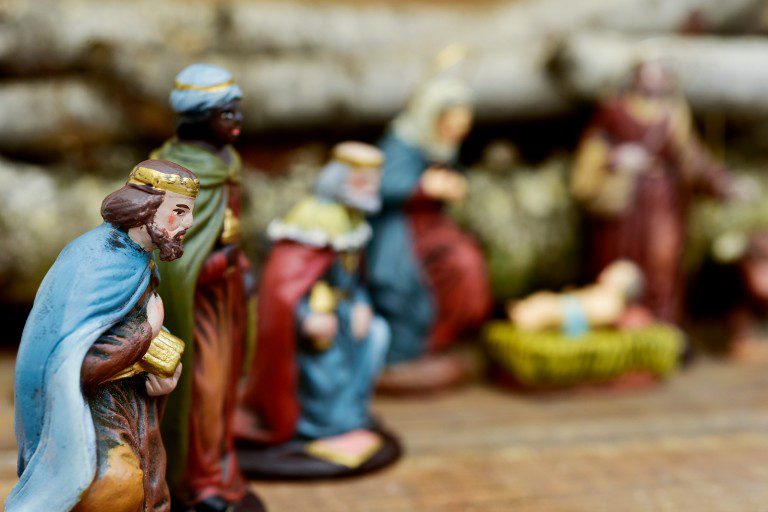 Who were the Wise Men from the East who came with gifts for the young Christ child? What is the significance of their gifts? Those familiar with the purpose and ordinances of the Temple as practiced at that time — and especially members of The Church of Jesus Christ of Latter-day Saints — might be able to draw some startling conclusions from this important Christmas event.

Who were the wise men?

The King James Bible calls the visitors “wise men,” which translation comes from the Greek term “magos” (plural “magoi”). The Latin Bible transliterates this term into the Latin plural “magi,” by which they are also frequently known in English. Some have speculated that they were from pagan cities in the area of modern Turkey or Iraq. From a very literal translation of “magoi”, one would assume they were from a pagan priest class in Persia. This seems unlikely to me: why would pagans set out to make a difficult and dangerous journey to offer gifts to a deity they didn’t recognize? More likely, they were probably religious leaders from scattered Israel, responding to direction and inspiration from God to fulfill a spiritual task. In Greek, the term “magoi” had become a much broader word for a person learned in arcane lore — hence “wise men.” There were plenty of Jews living in Babylon at the time, and other Israelite groups scattered even further. Either way, it appears as if they chose to come without disclosing their true identity, and their description as “wise men from the east” is intentionally vague. Elder Bruce R. McConkie — one of the LDS Church’s 12 Apostles before his passing in 1985 — gave his opinion that they were likely “true prophets”.

Tradition holds that there were three of them. This is purely because there were three gifts, but that is hardly good reason to assume such an idea. If they were there as witnesses, there would have been at least two or three, but there could have easily been more — the scriptures just don’t tell us.

The Gifts and Their Connection to the Temple

Trying to figure out exactly who the wise men were is mostly conjecture. The most fascinating part of the story is the nature of their gifts and their relationship to the temple. That tells you plenty about who they were.

Gold is for Kings, and in ancient Israel often connotes the heavenly presence. The founder of the LDS faith, Joseph Smith, had a vision in the Kirtland Temple with his scribe Oliver Cowdery. In it, they saw the streets of the kingdom of God paved with gold (The Doctrine and Covenants, Section 137:4) Ancient Israel used gold extensively in the Temple decor, connoting the heavenly realms and the presence of a king. All the tools of the ancient Temple were of solid gold, and the inner sanctuary was literally covered from floor to ceiling in hammered gold. In the mind of every ancient Israelite, gold would have suggested the temple. It was used to signify royalty, God’s presence, and even god’s promises. Because of its rare and costly nature, and the fact that it doesn’t rust or corrupt, it was one of the few materials considered suitable for use in sacred space.

Now, in your mind, think of the wise men’s gold. Are you thinking of a chest filled with coins? When we think of the wise men’s gift of gold, we almost always think of gold in the form to which we are the most accustomed from advertisements, books, TV, and movies: gold coins. But the text never says that, and in fact if we performed this same exercise with an ancient Israelite, it is highly doubtful that coins in a chest would be the first thing to come to their mind. If the gold was not in monetary form, what are the other possibilities? Ornamentation? Decoration? Tools for sacred ordinances?

Frankincense was a rare spice used in the Temple (Leviticus 2:1, 4, and 24:7 are some examples). It was harvested from the sap of Boswellia trees, which were slashed to get them to bleed the precious resin (they called the drops of resin “tears”). It was burnt with almost every sacrifice offered in Jerusalem’s temple. Mixed with salt, the smoke became white, and was seen as prayers ascending up to heaven. Thus it became recognized as a necessary ingredient or requirement for prayers to be heard and for sacrifices to be accepted. It was impossible to perform temple ordinances as proscribed in the Law of Moses without Frankincense.

Myrrh is a natural preservative. The Bible first mentions myrrh in Genesis 37:25. It was what the Ishmaelites were carrying down into Egypt (with balm from Gilead) when Joseph’s brothers got the idea that he should be sold to them as a slave, instead of allowing him to die in the pit. Consider this: After acquiring Joseph, the nature of the Ishmaelite’s cargo hadn’t changed much! Joseph as we know later preserved them all from death, and ruled over them all.

Myrrh was also mixed with olive oil and other spices to be used for anointings in the Temple. It was kept in a flask in the Holy of Holies. The formula for this “holy anointing oil” is found in Exodus 30:23–25. It also had preservative properties, and was used in death as a way to prepare bodies for burial. Christ was offered vinegar mixed with myrrh as He hung on the cross.

Tying it all Together

When we normally consider the wise men’s gifts, we usually tend to focus on the fact that they were rare and costly, and the lesson we derive from it is that we too should offer our best to Christ. While that is true, we shouldn’t forget that the gifts were also incredibly specific in their nature and use. Aside from their exchange value, the gifts would have been of very little practical use, especially for a young child. Unless. . .

. . . they were more than just gifts. Perhaps the wise men did more than just bring the young toddler gold to make His house more heavenly and sacred, frankincense for making offerings and consecrating sacrifices, and myrrh for anointing kings and priests. Perhaps they actually put these items to use in his behalf.

Let that sink in for a bit.

If this is the case, is there a way we can follow the wise men’s example and give Christ those same gifts? “And the King shall answer and say unto them, Verily I say unto you, Inasmuch as ye have done it unto one of the least of these my brethren, ye have done it unto me.” (Matthew 25:40)

I submit to you that through the LDS/Mormon doctrine of the Temple, we can most closely approximate the example of the wise men. It is beyond the scope of this article to go into that doctrine here, but let me summarize it as this: First, we obtain all temple ordinances for ourselves. After that, we — like the wise men — can minister and bring others into sacred space, the heavenly presence. We too can help those who have passed on make worthy sacrifices of a sweet savor, made possible by stripes and tears, and stand in for them in offering prayers to the Most High. We too can offer others an anointing with holy oil, accompanied by promises that transcend death, which they are free to accept or reject in the hereafter if they did not have the opportunity while living.

So many unanswered questions in the both the Old and New Testament are made plain when looked at through the lens of the Mormon faith. The wise men and their gifts is just one example. It is one of the many, many reasons why so many like myself find deep spiritual and intellectual satisfaction in this Christ-centered religion, and why Christmas time seems to be so full of riches far beyond anything the world can offer.

The theory that the wise men could have been from the America's, being Samuel the Laminate and Nephi and Lehi (brothers) make sense even more with the reasoning the gifts were for sacred ordinances. Prophets would have to bestow those ordinances with the right keys. The accounts of the Book of Morman and the disappearance of those prophets fall in line with the Biblical account.

Thank you for interesting, enlightening explanations of the uses of gold, frankincense and myrrh. Like so many of us I had focused on gold being the means to make the flight into Egypt possible, also providing the means to begin anew as far as home, profession etc. Maybe it is not too far fetched to think of the fact that Egypt was a land where kings ruled since ancient times, and now a true king would reside there for a time. Frankincense as a symbol for sacrifice and prayer is also a new thought to me, one worth pondering, as is the meaning of myrrh. However I hesitate to go so far beyond that into some of the inferred connections with Temple ordinances. Without becoming explicit I want to say that I agree in wonder with some of the ideas expressed, but some I just can't wrap my mind around. It would be lovely to have an explanatory discussion about these things in sacred surroundings. Thank you for sharing your thoughts and feelings, adding to the special Spirit of Christmas.