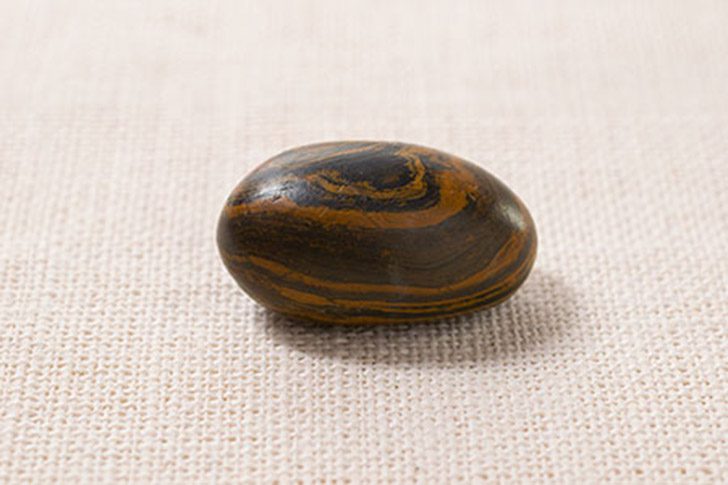 The Church Shows Joseph Smith’s Seer Stone for the First Time: Five Things to Know about the Seer Stone

Yesterday The Church of Jesus Christ of Latter-day Saints released photographs of a seer stone that was apparently one that the Prophet Joseph Smith used to aid him in translating the Book of Mormon. The stone has been in the Church Archives for many generations, but no known photographs have ever been taken of it or shown to the public.

The chocolate-colored oval-shaped stone was passed down from Oliver Cowdery’s widow, Elizabeth Ann Whitmer Cowdery, to Phineas Young who gave it to his brother Brigham Young. President Young’s wife, Zina D. H. Young, found this same stone in the estate of her late husband and gave it to the Church. It has remained in the archives ever since that time.

Here are five things to know about this seer stone.

One: It appears that Joseph Smith found this seer stone while digging a well for a nearby neighbor in Macedon Township, New York.

Elder B.H. Roberts recorded: “The Seer Stone referred to here was a chocolate-colored, somewhat egg-shaped stone which the prophet found while digging a well in company with his brother Hryum, for a Mr. Clark Chase, near Palmyra, New York. It possessed the qualities of Urim and Thummim, since by means of it…Joseph was able to translate the characters engraven on the plates.”[i]

Two: Joseph Smith used this seer stone by putting it in the bottom of a hat and putting his face into the hat to block out ambient light.

David Whitmer, one of the Three Witnesses of the plates, gives many accounts of the use of the seer stone during the translation process. George Q. Cannon interviewed David Whitmer on February 27, 1884 and recorded, “In speaking of the translating he said that Joseph had the stone in a hat from which all light was excluded. In the stone the characters appeared and under that the translation in English and they remained until the scribe had copied it correctly. If he had made a mistake the words still remained and were not replaced by any other.”[ii]

In another account published in the Omaha Herald, October 10, 1886, the reporter indicated that “the stone…glared forth its letters of fire. The Urim and Thummim [still referring to the stone], in this strange process of translation, would reflect a number of words in pure English, which would remain on its face until the party acting as scribe had got it correctly written, and the occasional disposition of the characters to remain long after they had been so written was always an infallible evidence that there was something wrong in the translation of the record, and a close comparison would invariably reveal this fact. When the necessary corrections had been made the words would instantly disappear from the Urim and Thummim [again referring to the stone] and new ones take their place.”[iii]

Three: The descriptions given of the seer stone by David Whitmer are consistent with the photograph released yesterday.

David Whitmer gave a number of physical descriptions of the seer stone including: “a small oval kidney-shaped stone,”[iv] “one dark colored, opaque stone.”[v] In one account David said Joseph “had two small stones of a chocolate color, nearly egg shaped and perfectly smooth, but not transparent…”[vi]

This Seer stone passed from Joseph to Oliver Cowdery and finally to the Church. Photo by Weldon C. Andersen and Richard E. Turley Jr. (Click on image to enlarge)

In some interviews, David Whitmer claims that after Martin Harris lost the 116 pages of manuscript, Joseph did not receive the original Urim and Thummim but “was given by the angel a Urim of Thummim of another pattern, it being shaped in oval or kidney form.”[vii] The Richmond Democrat reported in January 1888, that after the manuscript debacle, Joseph Smith “was presented with a strange oval-shaped, chocolate colored stone, about the size of an egg but more flat, which it was promised should answer the same purpose.”[viii] Elder Bruce R. McConkie made it clear that “The prophet also had a seer stone which was separate and distinct from the Urim and Thummim, and which (speaking loosely) has been called by some a Urim and Thummim.”[ix]

Four: Joseph Smith was using a seer stone to translate when Martin Harris was scribe.

According to Edward Stevenson’s interview with Martin Harris, it appears that Joseph had the seer stone before the loss of the 116 manuscript pages (which is not consistent with David Whitmer’s account). Here we see a most interesting account of Martin Harris and the Prophet Joseph’s interaction. Martin reported:

“The Prophet Joseph Smith…possessed a seer stone by which he was enabled to translate, as well as from the Urim and Thummim, and for convenience he then used the seer stone…The seer stone differed in appearance entirely from the Urim and Thummim that was obtained with the plates (which was two clear stones set in two rims, very much resembling spectacles)…After continued translation, we would become weary, and would go down to the river and exercise by throwing stones out on the river, etc. While so doing on one occasion, I found a stone very much resembling the one used for translating, and on resuming our labor of translation, I put in place the stone that I had found…The Prophet remained silent, unusually and intently gazing in darkness…Much surprised, Joseph exclaimed, ‘Martin! What is the matter? All is as dark as Egypt!’ My countenance betrayed me, and the Prophet asked me why I had done so. I said, to stop the mouths of fools, who had told me that the Prophet had learned those sentences and was merely repeating them…”[x]

Five: Joseph Smith could see things in the present using the seer stone.

In an account given by David Whitmer and Oliver Cowdery, Joseph used the seer stone to see the journey of David Whitmer from Seneca Falls (or Fayette) to Harmony Pennsylvania (over 100 miles) where he came to pick up Joseph and Oliver by wagon. David reported: “I was a little over two and a half days going, and traveled over 40 miles the first day, and met them on the third day at the head of Cayuga Lake, Seneca Co. Oliver told me, they knew just when I started, where I put up at night and even the name on the sign board of the hotel where I stayed each night, for he had asked Joseph to look in the Seer stone, that he did so and told him all these particulars of my journey. Oliver asked me when I first met them, when I left home, where I stayed on the road, and the names of the persons at Hotels. I could not tell the names; but as we returned I pointed out the several houses where I had stopped, when he took out his book and found them to correspond even to the names on the sign boards, all of which he had written before we met. As had been told him by the Prophet, and which agreed in every particular.”[xi]

Martin Harris recorded a most interesting account of the use of the Seer stone: “I was at the house of his father in Manchester, two miles south of Palmyra village, and was picking my teeth with a pin while sitting on the bars. The pin caught in my teeth, and dropped from my fingers into shavings and straw. I jumped from the bars and looked for it…I then took Joseph on surprise, and said to him—I said, ‘Take your stone.’ I had never seen it, and did not know that he had it with him. He had it in his pocket. He took it and placed it in his hat—the old white hat—and placed his face in his hat. I watched him closely to see that he did not look [to] one side; he reached out his hand beyond me on the right, and moved a little stick, and there I saw the pin, which he picked up and gave to me.[xii]

The Lord used miraculous means to bring forth His Church in these last days and we are now privileged to see one of those means in photograph.

[i] Roberts, B.H. Comprehensive History of The Church of Jesus Christ of Latter-day Saints, Volume 1: 129.

Learning about the seer stone raises many interesting questions for me. According to sources other than this article, the Prophet first encountered it while digging a well long before he received the First Vision. He used it for a long time to find things people had lost until an angel of the Lord told him to stop. How did he recognized it for what it was? Why did the Lord allow such a specialized and sacred instrument to be used for the mundane purpose of locating lost objects? Fascinating. Absolutely fascinating.

I was wondering why Joesph couldn't look in the rock and find the lost 116 pages of the BOM It would seem that finding the 116 pages would be much more important than the other things he used it for.?