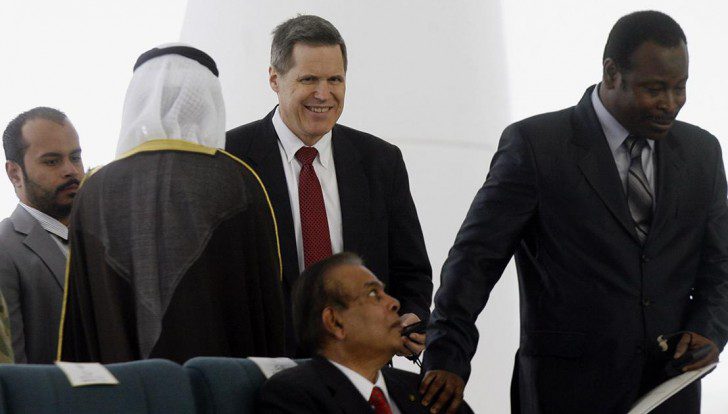 “Al Qaeda wants to kill him. Insurgents who chant “Death to America!” have toppled the government. A civil war rages around him. Most of his colleagues have left, and a top U.S. senator says he should go, too.”

This is the compelling headline of an article in Politico last week about the U.S. ambassador in Yemen, who lives in the embassy with only a skeletal staff left, because the U.S.-backed government has fallen and everyone else has been evacuated. The writer says that this diplomat might have the most dangerous job in the world.

With memories of Ambassador Chris Stevens’ brutal murder, his body dragged through the street, at the hands of terrorists in Benghazi in 2012 still fresh in our minds, you wonder who is this man who would stay in volatile Yemen in these circumstances—and what is he thinking?

The man is Matthew Tueller—and he is a Latter-day Saint, a graduate of BYU, Harvard’s John F. Kennedy School of Government and a veteran Foreign Service officer. What he’s thinking may be more difficult to determine, but first let’s outline the danger with help from Politico.

“The collapse of Yemen’s government only compounds the danger in a country that is becoming a terrorist-infested failed state.

“Yemen is home to Al Qaeda in the Arabian Peninsula — a terrorist group with links to several high-profile plots, including this month’s massacre at the Charlie Hebdo newspaper in Paris. America’s envoy to Yemen has long been one of its favorite targets. The group offered to pay anyone who killed Tueller’s predecessor as ambassador a bounty of $160,000 in gold. Photos posted on social media depict Tueller’s image tinted blood red with an X across it. In November, AQAP claimed that a bomb meant to kill Tueller outside a meeting was discovered minutes before he emerged.

“Adding to the danger is political chaos after Yemen’s president, prime minister and cabinet officials stepped down on Thursday, following the seizure of the presidential palace by Houthi insurgents hostile to the United States. As recently as last fall, President Barack Obama hailed America’s partnership with Yemen’s government against AQAP as a counterterrorism success story.

“So much for that. Al Qaeda has exploited the current mayhem, stepping up its local attacks—including a Jan. 7 car bomb in central Sanaa that killed dozens of police recruits. On Tuesday, unidentified gunmen fired on a U.S. diplomatic vehicle stopped at a checkpoint near the embassy; no one was harmed.”

I asked Ambassador Tueller’s father, Blaine, what he thought reading this article that paints his son’s circumstances in such grim terms. He said, “The article in Politico was a revelation to us, too. We didn’t know his colleagues consider him such a good Arabic speaker.”

What? Did I miss something? The revelation wasn’t about the nature of the danger, but about his skill? I reread the article and here was the line to which Blaine was referring. Top U.S. diplomat Ryan Crocker said that Tueller “has probably the best Arabic of anyone in the foreign service.”

Matthew Tueller is described as the embodiment of the state department’s mantra for serving in the Middle East—“Don’t panic.” But his calm, unflappable manner must come from a combination of nature, experience, faith and family legacy because his parents seem to be as calm about his serving there as if he were on a family picnic. Blaine Tueller’s career was also on assignment all over the world for the State Department.

Blaine said of Matthew, “He’s a dedicated officer and he loves his work. He likes what he’s doing there and knows that it’s important. There’s always the possibility that something could happen, but the Department of State has taken every measure possible to make sure that it won’t. He feels that he’s safe. You can’t be 100% sure, but that’s the chance you take.”

“If you close an embassy every time the going gets rough, you’re stripping yourself of your diplomatic strength just when you need it most,” Crocker said in the Politico article. In the vacuum of power left by the collapsed government, both the Iraqi-backed Houthi’s who toppled the government and al Qaeda are gaining momentum. It would be a bad time to abandon ship and Matthew Tueller believes he is the one to do the job.

On his weekly calls home, he assures his family that he is safe and that the State Department has taken extra security measures in his behalf, but he doesn’t talk about his work. He is quiet on any details. Instead, he asks about the family and is concerned about his wife, DeNeece, who cannot come on this dangerous assignment.

“Matthew is one who keeps his own counsel,” said his father. “He has always been a close-mouthed kid. Once when I was on assignment in Venezuela, we sent him home alone to visit his grandparents. When I asked his grandfather how things had gone, he answered, “Matthew can be silent in seven different languages.”

His fluency in Arabic started when his father was on assignment in Tangiers, Morocco, and he was nine years old. The children at school were offered the choice of taking French or Spanish—and, instead, he asked if he could take Arabic. He picked the language up so quickly, he became a tour guide for visitors from the United States. The Tuellers loved the Mediterranean Sea and quickly became used to being the only Americans and the only Mormons in the area.

The Six-Day War of 1967 broke out just as Tuellers’ time in Morocco was ending, and the State Department reduced staff in the area. Blaine’s career became refocused to Latin America, but his son had caught a love for the Middle East that would re-surface years later at BYU, when again he wanted to study Arabic. BYU had no Arabic courses, but finally brought in a new professor and created courses, in part, for this avid student.

Fluency in Arabic would turn out to be more than handy.

Though he considers Utah home, for the last 30 years Matthew Tueller has been on assignment in the Middle East, except for a brief stint in London at a desk associated with the Middle East. These are the people he knows and loves.

Like a fan who drew the best seats at the basketball game, his work has also given him front row seats on some of the most dramatic moments in recent history. He was assigned in Saudi Arabia when the terrorists flew their jets into the World Trade Tower on 9/11.

He was at the embassy in Egypt during the Arab Spring uprising in Tahrir Square. During this time Egyptian rebels overran the U.S. Embassy, commandeered vehicles and looted homes. Matthew’s family was evacuated and he was left behind to help evacuate thousands of Americans and sit tight amidst the fury.

Blaine said, “The situation in Egypt was pretty rough for him. The country was in chaos. Matt was in the embassy for almost two weeks without even going home. Still, he seemed to really enjoy his work there. He had a good time in Cairo.”

His last assignment was as ambassador to Kuwait, when a year ago he was called to be the ambassador to Yemen, one of al Qaeda’s top breeding grounds, the place where years ago the U.S.S. Cole was blasted as it sat peacefully in the harbor.

Now Yemen is just plain messy, a tribute to failed counter-terrorism efforts and the power of rebel insurgencies. The 10 acres of the American embassy is somewhat empty, but he stays working hard to stop terrorism and bring stability to this torn land. Still Blaine says, “As long as we know he is safe and well and enjoying his work and doing what he needs to do, we’re happy.”

As a retired American diplomat who served with several other LDS diplomats in Afghanistan, I appreciate any acknowledgement that there are Mormon men and women serving in dangerous areas around the world, and that Matthew Tueller is one such public servant. The article title, though - "The LDS Diplomat who Might Have the Most Dangerous Job in the World" - is more sensational than accurate. Ambassadors are fairly protected people living in danger zones. The underlying diplomats and servicemen have, I would argue, much more dangerous jobs; they just don't have the visibility of the top people. However, I would argue that He who had the most dangerous job in the world (as in likely to lead to death) was our Savior, who was crucified by wicked men some two thousand years ago. How grateful we are for his sacrifice for us.

We met Matt and DeNeece in the Riyadh East Ward in Saudi Arabia. The article describes him well. I am not surprised at the description of integrity and courage he displays. The article would double in length trying to describe the courage and faith DeNeece and family living without Dad at home. She was my son's favorite Primary teacher.