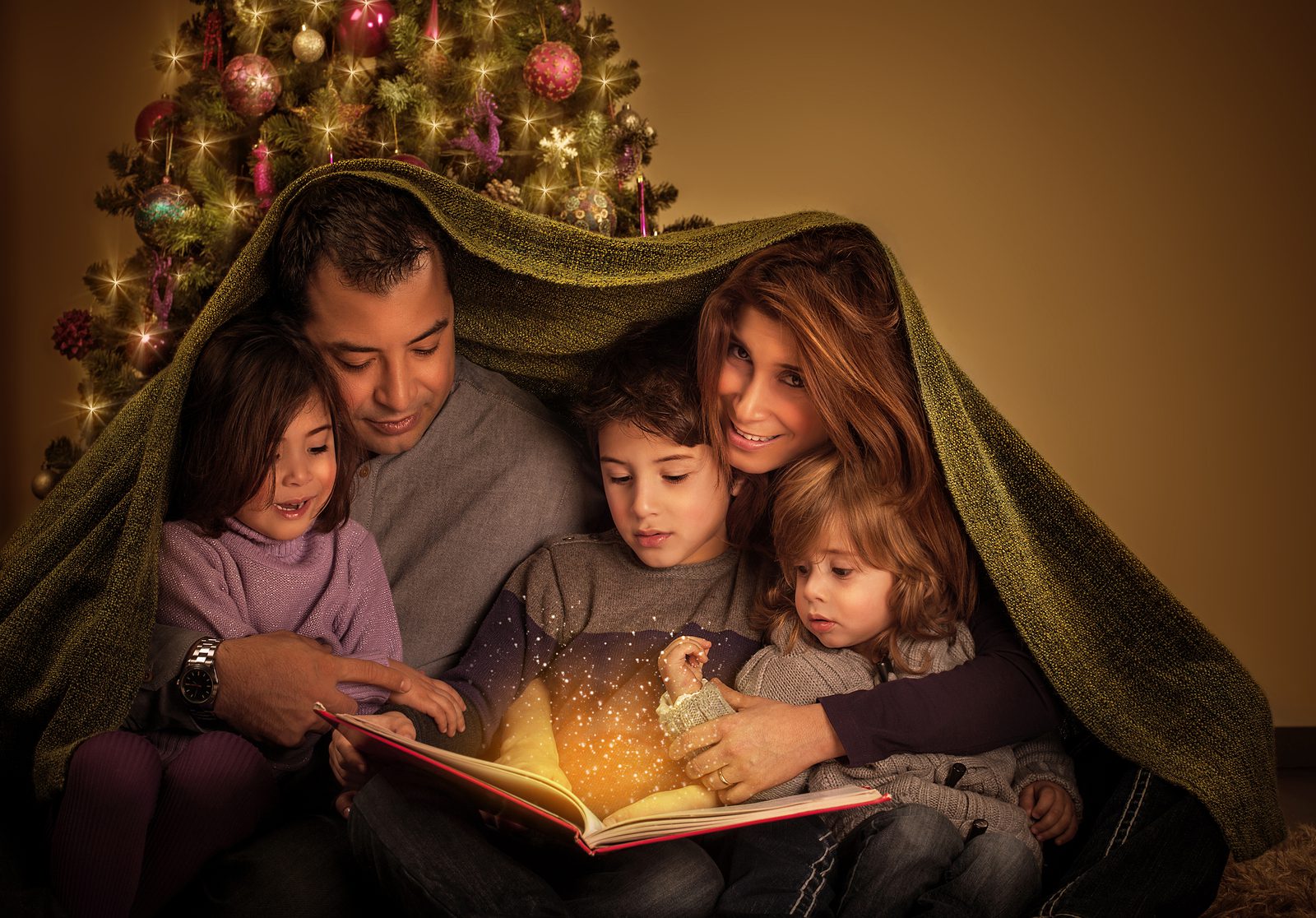 The Surprising Place You Find the Best Christmas Stories

I believe one of the best ways to celebrate the spirit of the Christmas season, the spirit of Christ, is to share and tell stories that reflect this spirit. In particular, it’s nice to share stories from your own family heritage that reflect what it means to remember Christ and the spirit of giving at the Christmas season. So, in that tradition, this season I choose to share two stories with you from my own family heritage. The first is a story of my brother and the Christmas legacy that he passed on after his early death. The second is a story of my father and his encounter with Christmas as a young LDS missionary on the Navajo Indian reservation in the early 1960’s. Enjoy.

A Christmas Eve Tradition to Remember

(This account of my own family’s interesting Christmas Eve tradition was actually written by a friend, Cheryl Smith, which she passed along to me in recent days. I am, therefore, stealing her words although the memory is all mine).

Several years ago, when I was living in Washington, D.C., a friend of mine from Utah County told me of his family’s Christmas Eve tradition — probably the sweetest and most touching I’ve ever come across. It warmed my heart and has continued to enchant me for over a decade.

Jack and Karen Brotherson of Orem are the parents of six children — Mark, Sean, Eric, Jeanne, Rachel and Erin. As was the case with most families, the last few weeks prior to Christmas were a series of days spent at shopping malls, purchasing from catalogues, and attempting to hide presents from one particularly curious and ambitious daughter who’d made snooping an art form.

Mark, the oldest boy, managed to escape the hustle and bustle by shopping late rather than early. No, I don’t mean he caught those great last-minute sales, I mean he literally would procrastinate holiday shopping until 11 p.m. or so on Christmas Eve. That’s about the time he’d mosey down to the local convenience store and carefully select items he deemed worthy and suitable as gifts for his parents and siblings. He’d then take them home and wrap each one, often times in a plain, brown grocery sack.

Imagine the glee on the faces of family members as they tore into Mark’s highly anticipated, non-conformist gifts. After all, every mother wants a giant bag of beef jerky, does she not? And what teenage girl wouldn’t be thrilled with a cassette tape of the Oak Ridge Boys’ Greatest Hits. This was an altogether different brand of holiday cheer.

Several years ago, Mark was killed in a tragic automobile accident. The loss of this bright, beautiful boy was especially felt during the family-centered holidays, particularly on Christmas Eve. Jack, a devoted father and a man of great tenderness, decided to personally inherit Mark’s tradition.

From that time forth, he assumed Mark’s role as last-minute holiday shopper. The gifts (usually something along the lines of Styrofoam coolers, mini flashlights or giant Pez dispensers) are purchased then brought home, carefully wrapped, and placed under the tree. Each is tagged “from Mark.” When each gift is opened, it is an opportunity to remember fondly, and usually with a chuckle, the joy of Mark’s unique nature.

Traditions, as they are want to do, continue. The decorations are up, the holiday menu is planned, and travel arrangements are made. Karen, in her official capacity as “Christmas Gnome” continues to make Christmas magic for everyone around her. Rachel, though now herself a married mother of one, continues her “snooping for presents” tradition.

Many of the kids will be home for the holidays this year. The grandchildren will assume their roles in the reenactment of the Christmas story. (This necessitates swaddling the newest family addition and carefully placing him/ her in the manger scene — a.k.a. Karen’s piano bench lined with blankets.) And close to midnight on Christmas Eve, somewhere in Orem there’ll be a tall, white-haired, old cowpoke trying to decide if his youngest daughter prefers 10W-30 or 20W-50 motor oil for her car.

Last year, just before Christmas, I relocated from Washington, D.C., to Utah County to go to BYU. Prior to my move, I got a call from Jack and Karen. They invited me to come live with them while I attend school. I took them up on their generous offer and it has been a wonderful year. This Christmas Eve, my plans will include some holiday tunes, last-minute gift wrapping, and, if all goes as planned, my first ride-along on the midnight run.

Story #2 – A Testimony of Christ on Christmas Eve

(This story was related to me by my father, Jack Brotherson, and I recorded it for our family history. He was a young man serving in the Southwest Indian Mission, stationed in Arizona on the Navajo Indian reservation, at the time of this experience in the early 1960’s).

During my third Christmas in the mission field I was living at Kaibito in Arizona, out on the far reaches of the Navajo Reservation. While there, we often had people come in the middle of the night and ask us to take them to Tuba City, or to haul them to some far-off Hogan so they wouldn’t have to walk.

This particular day just about 4:00 in the afternoon on Christmas Eve, a group of Navajos came to our place, bringing home from the hospital one of their family members. They asked if we could possibly give them a ride to their home, which was about seventy-five miles across the reservation and down into a part of the Kaibito area called Tsiskisee. The roads were not particularly good, as there had been quite a bit of snow. We weren’t sure that we could make the trip, but they indicated that cars had been coming out, and so we thought we’d try.

Well, as we started with that little Chevy truck loaded down with people and belongings, we went for about thirty miles without too much trouble. Then we reached the point where the road kind of ran out since there had been a recent snowstorm. It was getting about 5:00 and dark was not far away. We still had about thirty-five to forty miles to go. We spent the rest of the evening with one of the old men in the truck who knew the terrain and the area guiding me along where the roads were supposed to be. Sometimes we had to leave the roads because of drifts, travel cross-country over ridges and then back into the roadways. We reached the Hogans around 10:30 that night. It had been about a seven-hour journey.

It was late, and even though it was Christmas Eve and we wanted to go home, we just knew that it was inadvisable. So, the family gave us a hogan to sleep in, sheep hides for bed mats, and blankets to cover us. We stoked a fire in the little round barrel top stove, had our evening prayers and went to bed, with the intent that we would travel back to Kaibito the following morning.

I remember waking about midnight and hearing the lambs and goats bleating in the corral about 100 yards away. I was also cold because the fire had died down. So, I stepped to the side of the hogan, picked up some wood and re-stoked the fire. When it was blazing well, I told my companion I was leaving for a few moments to go outside. I left the hogan, and I thought that perhaps it would be wise if I started the truck so that it would start in the morning, because it was so cold. I started the truck, and waited a few minutes for the truck to warm up.

There I stood on that far edge of the world among the cluster of five hogans with the people all soundly asleep. Just after midnight on the day that we celebrate that our Lord and Savior, Jesus Christ, was born. As I looked up at the wide expanse of heaven while leaning on the truck, I saw not a cloud, but rather there was the cold and the sharp contrast of earth and sky. The heavens were ablaze with the stars, and I was made to feel incredibly lonely at that moment in time, about as far away from my family and any other human being that I could possibly feel. And as that sense of loneliness engulfed me, I just stood and took in the breadth of the sky and all its radiant beauty.

I heard after some time a lamb or two bleating in the corral. This distracted my attention, and sensing a little bit more unrest among the animals, I thought that perhaps I should walk the hundred yards or so from the truck to the corrals to see that everything was all right. As I crossed that stretch of ground on that cold and starlit night, I looked up at the stars and thought of that faraway land where some 2,000 years before my Savior had been born, on a night not unlike this perhaps, wherein he with his parents sat in a lonely stable surrounded by a few sheep, goats and other animals. It would have been again, in a sense, in a lonely part of that world.

I reached the corral, saw everything was OK with the sheep, turned and began to cross that hundred yards of space between the corral and the truck. As I reached the midway point, I had to stop and look once more at the wide expanse of heaven, and uttered a prayer of thanksgiving for that night and that event which happened 2,000 years before. Following the prayer, as I turned to walk towards the truck I distinctly heard a child cry in the night. That cry spoke to my inner soul with an ardent voice, and I knew then in a way I had never known before that I had been given a gift, a gift of Christmas unlike any other I would ever receive.

As my young family has grown over the years, one of our Christmas traditions has become reading and sharing a different Christmas story every night from December 1st to December 25th. In addition to the stories that we have gathered from a variety of books, we now also have started adding these stories, our own family stories, to the Christmas story reading tradition. Writing down and passing on such stories can become a Christmas gift and tradition that will bless families for generations to come.

During this Christmas season, slow down and take a few moments to remember. Remember the moments that have given you a testimony of the rich spirit of family, faith, and the Savior at this Christmas season. Write them down and share them with your family members. Let your Christmas memories become part of your family heritage that will bless those around you at this special time of year.