What Should We Make of the Story of Elisha and the Bears? | Meridian Magazine 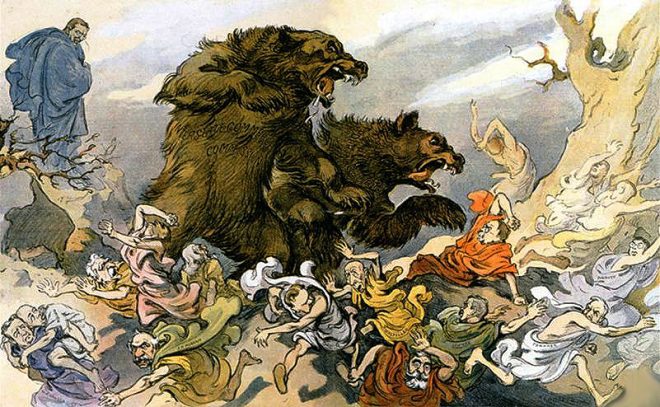 What Should We Make of the Story of Elisha and the Bears?

An Old Testament KnoWhy[i] relating to the reading assignment for Gospel Doctrine Lesson 29: “He Took Up … the mantle of Elijah” (2 Kings 2:5-6) (JBOTL29A).

Figure 1. Prophet Elisha, Russian icon from first quarter of 18th century.[ii] The prophet is often portrayed with an uncovered, bald head. However, such a depiction may be the result of a textual misunderstanding.

Question: One of the most disturbing and incomprehensible accounts in the Old Testament concerns Elisha and the bears who mauled those who jeered at him? What should we make of this strange story?

Summary: The story is one of a sequence of events narrated to emphasize that Elisha was the legitimate successor to his prophetic predecessor, Elijah. Daunted by the prospect of many who would wonder if Elisha could measure up to Elijah’s greatness, Elisha asked for a “double portion”[iii] of Elijah’s spirit to rest upon him — figuratively invoking the Deuteronomic law that endows the firstborn and heir of the father with a double portion of his property.[iv] As bearer of Elijah’s mantle,[v] Elisha performs similar miracles to Elijah, starting with the parting of the Jordan river,[vi] causing those who saw the event to witness, “The spirit of Elijah doth rest on Elisha.”[vii] Subsequently, the two brief episodes of the healing of the waters of Jericho[viii] and the much misunderstood mauling of the youths who mock the prophet[ix] “demonstrate Elisha’s authority and prove that he is the legitimate prophetic heir of Elijah. He has the capacity to bring life and blessing to those who recognize his authority, or death and judgment to those who reject him.”[x] As elsewhere in the books of Kings, the narrator intends to show in no uncertain terms “that contempt toward divinely called prophets is disastrous for God’s people.”[xi]

came forth… out of the city. Jewish legend says that those who mocked Elisha were people of Jericho whose trade in selling drinking water had been spoiled by the miracle wherein he “healed” the local waters.[xii]

little children. The LDS Bible footnote 23a suggests a more accurate reading: “youths (not little children).” “The Hebrew expression neûrîm qetannîm is best rendered ‘young lads’ or ‘young men.’ From numerous examples where ages are specified in the Old Testament, we know that these were boys from twelve to thirty years old.”[xiii] “The group must have included over 50 boys old enough to be out running in a pack, and so they constituted something of a physical threat to Elisha.”[xiv]

And mocked him. One manuscript adds that they also “stoned him.”[xv]

Go up thou bald head. A plainer rendering of the sense of this phrase might be, “Why don’t you ascend to heaven like you claim your master did, you empty-headed liar!”

“[The phrase ‘Go up’ was not a topographical reference] to the uphill grade of the Bethel road. Instead the youths were alluding to Elijah’s translation to heaven. This they did not believe. … To put it in modern terms, they jeered, ‘Blast off! Blast off! You go too. Get out of here. We are tired of both of you.’ These … ruffians used the same Hebrew verb used at the beginning of the second chapter of 2 Kings to describe the taking up of Elijah into heaven.”[xvi] Note that a parallel to the unsuccessful search for Elijah after he was taken up to heaven is found in the Enoch literature where Enoch and a group of followers are similarly taken up to heaven.[xvii]

With reference to the enigmatic comments about Elisha’s “bald head,” most commentators take a simple common sense view, e.g., “Elisha might have already been so bald by nature that to youthful eyes he looked grotesque; or perhaps some prophets, like later Christian monks, shaved their heads as a mark of their vocation.”[xviii] By way of contrast, George Lamsa observes that the youths could never have known whether Elisha was bald-headed. In the East men always cover their heads, even when at home.[xix] Moreover, Walter C. Kaiser notes that Elisha can hardly have been more than twenty-five when this incident occurred and “[n]atural baldness was very rare in the ancient Near East.”[xx] Thus, Lamsa asserts that “Karkha (bald) in this instance could also mean liar, empty skull, or empty head. In vernacular Aramaic we often say, ‘He has lied so much that he has lost his hair.’ Seemingly, the people of Jericho had doubted Elisha’s story that his master had ascended into heaven. They asked him to go with them to search for his master, Elijah; but Elisha refused. Nevertheless, they went ahead and sent fifty men, but they failed to find him.[xxi] … The [youth]… called him a liar. Elisha had told the truth about Elijah, but the people did not believe him.”[xxii]

24. And he turned back, and looked on them, and cursed them in the name of the Lord. And there came forth two she bears out of the wood, and tare forty and two children of them.

cursed them in the name of the Lord. “Elisha uses no profanity in placing a curse on these young men. He merely cited the law of God, which the inhabitants of Bethel knew well. Moses had taught, ‘If you remain hostile toward me and refuse to listen to me,… I will send wild animals against you, and they will rob you of your children.’”[xxiii]

forty and two. “‘Forty-two’ occurs again in the number of victims slain by Jehu in 10:14. Was it a figure expressing a large number … common to the story-telling of that period?”[xxiv]

tare … them. “The bears did not kill the offenders, as some commentaries assume, but ‘tare,’ or lacerated them.”[xxv]

there came forth two she bears. “[I]s it not possible that these forty-two were a set of unlucky young men, who had been employed in the wood, destroying the whelps of these same she-bears, who now pursued them, and tore them to pieces, for the injury they had done? We have already heard of the ferocity of a bear robbed of her whelps; see at the end of [2 Samuel chapter 17]. The mention of she-bears gives some color to the above conjecture; and, probably, at the time when these young fellows insulted the prophet, the bears might be tracing the footsteps of the murderers of their young, and thus came upon them in the midst of their insults.”[xxvi]

Kaiser asserts that the Israelites would have been spared a worse fate had they learned the lesson of those who refused to recognize Elisha’s prophetic mantle:[xxvii]

The savagery of wild animals was brutal enough, but it was mild compared to the legendary cruelty of the Assyrians who would appear to complete God’s judgment in 722 B.C. The disastrous fall of Samaria would have been avoided had the people repented after the bear attack and the increasingly severe divine judgments that followed it. But instead of turning back to God, Israel, as would Judah in a later day, “mocked God’s messengers, despised his words and scoffed at his prophets until the wrath of the Lord was aroused against his people and there was no remedy.”

[i] Used with permission of Book of Mormon Central. See https://knowhy.bookofmormoncentral.org/reference-knowhy.

The alternate reading of Elisha and the Bears was a great way to quell the class's horror at this story! Thanks.

Convenient Spirituality and an Inconvenient God