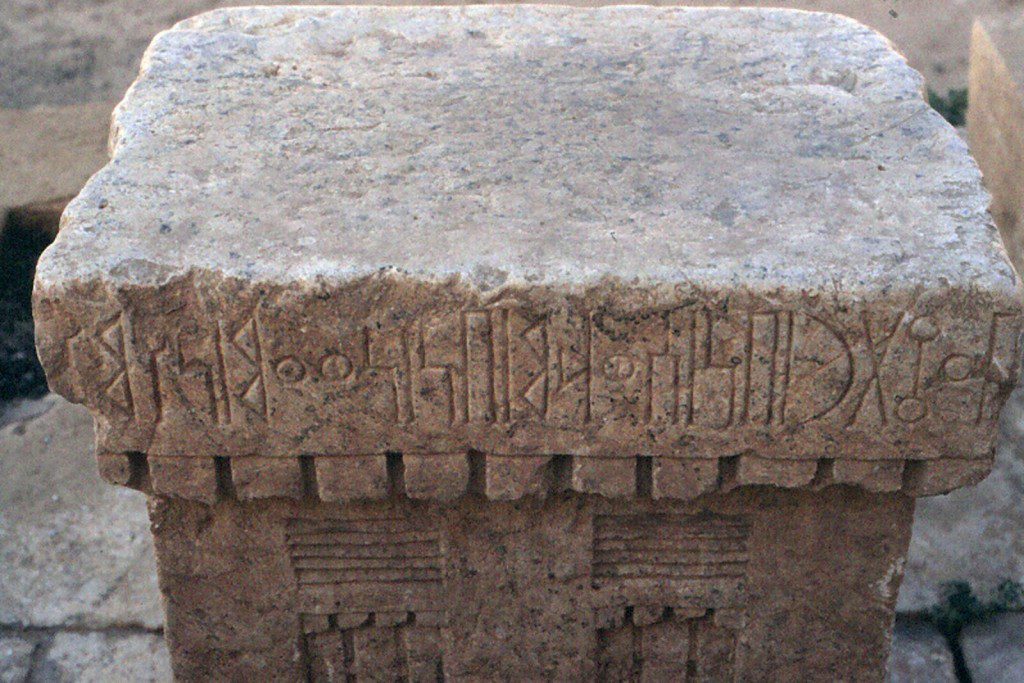 “And it came to pass that Ishmael died, and was buried in the place which was called Nahom.” (1 Nephi 16:34)

As Lehi and his family traveled through the wilderness, they would name places where they stopped. Lehi “called the name of the river, Laman” (1 Nephi 2:8), which ran through “the valley which he called Lemuel” (1 Nephi 16:6). At another camp, Nephi remembers, “we did call the name of the place Shazer” (1 Nephi 16:13). When they arrived at a coastal location with an abundance of fruit and honey, Nephi says it’s “the land which we called Bountiful” and the sea, he says, “we called Irreantum” (1 Nephi 17:5).

When Ishmael died, however, Nephi uses the passive voice to identify “the place which was called Nahom” (1 Nephi 16:34). “Note,” Hugh Nibley stressed as early as 1950, “that this is not ‘a place which we called Nahom,’ but the place which was so called.”[i] Unlike the other campsites named in the text, this one already had a name, which Lehi’s group could, logically, only have learned by talking with local people.

Since Lehi did not name this place himself, this suggests the possibility that it could be found today. Archaeologist Ross T. Christensen noticed the name Nehhm on Carsten Niebuhr’s 1763 map of Arabia, in the southwest corner of the Arabian Peninsula, which is modern day Yemen. In a note published in the August 1978 Ensign, Christensen noted that “Nehhm is only a little south of the route drawn by [Lynn and Hope] Hilton,” who had mapped out Lehi’s route a couple years earlier.[ii]

This led Warren Aston, an independent researcher from Australia, to make a series of visits to Yemen to further research the origins of the place named Nehhm/Nehem in southern Arabia. Aston found that there was only one place in all of Arabia known as Nehem, and was able to trace it through maps and historical references back to about the time of Christ, still 600 years too late for Nephi.[iii]

Then, in 1999, S. Kent Brown, professor of Ancient Scripture at BYU, noticed an altar from Yemen in a museum catalog, bearing the inscription, “Bi’athar, son of Sawåd, son of Naw’um, the Nihmite.”[iv] The term Nihmite indicates that the donor, Bi’athtar, hailed from “the Nihm region, west of Mārib.”[v]

Nihm, Nehem, and Nehhm are all variant spellings of the same tribal and territorial name. Like most ancient Near Eastern languages, the south Arabian script found on the altar did not include vowels; hence Nihm/Nehem was spelled simply as NHM. Nephi’s own writings would have also omitted vowels, making NHM his equivalent of Nahom.[vi]

In 2000, Warren Aston went to Mārib in Yemen, to examine the altar. He found two more altars with the identical inscription.[vii] The altars were believed to be an “archaic type,” in style and “dating from the 7th to 6th centuries before Christ” by the original excavator.[viii] More recent work on the chronology of ancient Arabia, however, pushes the dates further back to approximately 800–700 BC.[ix] Aston has also documented writings mentioning NHM in texts from 700–300 BC.[x]

Aston’s research also shows that the Nihm region included, or lay adjacent to, a central burial ground for outlying desert communities.[xi] It is the largest known graveyard in all of Arabia, and was actively used from about 3000 BC to AD 1000 .[xii] The very meaning of Nihm refers to the stonework used to build grave sites and other buildings, and is possibly connected to similar words in Arabic, Hebrew, and Egyptian, which refer to mourning the death of a loved one.[xiii]

Could Nihm/Nehem be Nephi’s Nahom? The location of Nahom can be correlated with the family’s eastward turn and arrival in Bountiful (1 Nephi 17:1–5). Likewise, the only suitable location for Bountiful is on the southern Omani coast, in Dhofar, which is nearly due east from the Nihm territory in Yemen.[xiv] Furthermore, coming down the caravan trails, traveling eastward is impossible in Arabia until reaching the Nihm area.[xv]

The inscriptions found at Mārib and elsewhere add assurance that the Nihm region was known by that name when Lehi’s family would have been there to bury Ishmael and mourn his death, and the overall correlation between Nihm and Nahom is striking. Although the Nihmite altars, discovered in the late 1990s, do not say, in effect, “Lehi slept here” or “Ishmael was buried here,” this historical data is significant and should not go unnoticed by anyone tracking the trail that Lehi and his party followed down the western coast of the Red Sea.

Writing in 2002, Terryl Givens, a Latter-day Saint historian and professor at Richmond University, marveled, “Found in the very area where Nephi’s record locates Nahom, these altars may thus be said to constitute the first actual archaeological evidence for the historicity of the Book of Mormon.”[xvi] Since the finding of these altars, it cannot honestly be maintained that there is no archaeological evidence for the Book of Mormon.

Neal Rappleye and Stephen O. Smoot. “Book of Mormon Minimalists and the NHM Inscriptions: A Response to Dan Vogel.” Interpreter: A Journal of Mormon Scripture 8 (2014): 157–185.

[i] Hugh Nibley, Lehi in the Desert/The World of the Jaredites/There Were Jaredites, The Collected Works of Hugh Nibley: Volume 5 (Salt Lake City and Provo, Utah: Deseret Book and FARMS, 1988), 79, italics of we added.

[v] St. John Simpson, ed., Queen of Sheba: Treasures from Ancient Yemen (London: British Museum Press, 2002), 166. Some critics have insisted that Nihm was a tribal name, but not a toponym or place name. The tribal territory, however, bears the Nihm name today, and has borne it for as far back as we can trace any Arabian place names. In common with other tribal territories in southern Arabia, Nihm is the name of the tribe and of its territory.

[vi] Not understanding Semitic languages, some critics have made a big deal out of the different vowels, or other spelling/pronunciation differences. For a response see Neal Rappleye and Stephen Smoot, “Book of Mormon Minimalists and the NHM Inscriptions: A Response to Dan Vogel,” Interpreter: A Journal of Mormon Scripture 8 (2014): 173–179.

This is incredible and thrilling! While I don't rely on archaeological evidence to support my testimony of the Book of Mormon, I do love it when such evidence and correlations are found. It feels like the completion of a circle -- everything is connected from beginning to end, past to present to future. I am so grateful to Meridian Magazine for bringing stories like these to light on a daily basis, and made a contribution -- weeks ago -- to show my appreciation and keep these article coming!