"With All Diligence": Capturing Family History Stories in the DR Congo | Meridian Magazine 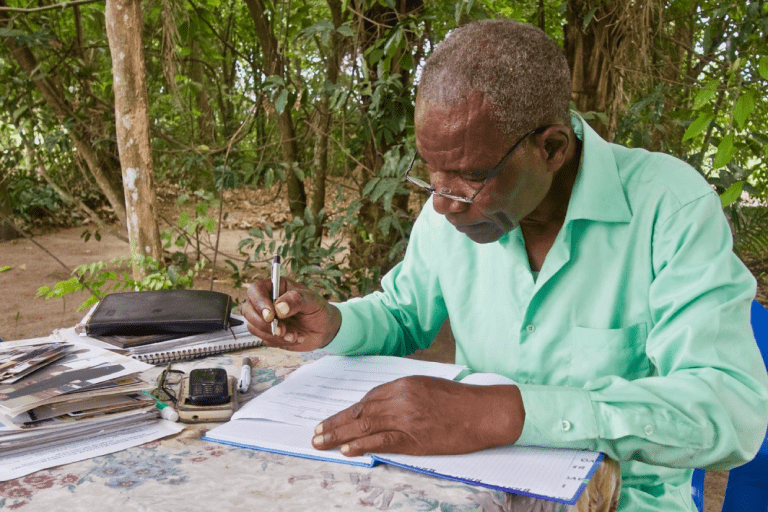 “With All Diligence”: Capturing Family History Stories in the DR Congo

Author’s note: This series shares six stories about members of The Church of Jesus Christ of Latter-day Saints from the Democratic Republic of the Congo. Each story is framed in the context of a Christlike attribute. This article with examples of diligence is an adapted and expanded from part 4 of a presentation given at the FairMormon 2018 Conference. The video version of the entire FairMormon presentation is available on the FairMormon YouTube channel at https://www.youtube.com/watch?v=nJl9FvLKmjw

Family history work in places like the DR Congo calls for a particular kind of diligence. This story illustrates the quiet work the institutional Church and the local Saints are doing on an impressively large scale to preserve vanishing family records.

Some of this important work is taking place with little fanfare within the “Hôtel de Ville” (Town Hall) of Kinshasa.

The nondescript entrance to the room assigned to the family history team is on the third floor of the well-guarded building.

Though, in entering, there was nothing impressive to the naked eye, a sweet and temple-like spirit of quiet diligence filled the room. The deliberately darkened windows shut off and set apart this space from the clamor of the city. Two returned missionaries and one city employee were working full-time to digitize government records.

The records in question were applications for government identity cards from 1925 to 2015, the last time such cards were issued. The importance of preserving these applications is made greater by the fact that there has been no census in the country for more than thirty years.

This record from 1942, still the era of Belgian colonization, contains personal information about Manuel Zuzi, whose profession is listed as “travailleur” (worker). Information about his parents is also listed. Often parents and children have completely different family names, making it very difficult to trace family ties between without such evidence.

Each week the hard disks are shipped to Salt Lake City for further processing and, eventually, indexing by volunteers. A copy of the records database will be given to the government.

In the World Report from the April 2018 General Conference, you may have seen Thierry Mutombo, among others, speaking about a new and urgent initiative to gather family histories in Africa in places where the only records are those of human recollection.

Brother Mutombo wept as he told me about an elderly man who told him he had come too late because many of those who could have reconstructed their family history from memory had already passed on.

A trip to gather oral histories from a village chief relatively close to Kinshasa was being planned for early May. The lead for the team was Daniel Tusey Kola, an early member of the Church who was the first stake president in Masina and the first Congolese Area Seventy. He and his wife Thérèse seemed a perfect match for each other.

They had witnessed some of the most important scenes in DR Congo church history. For example, more than twenty years ago, they participated in the first temple trip of Congolese saints to Johannesburg, while Thérèse was expecting their first child.

This portrait includes the youngest segment of the Kolas’ twelve children. They are living proof of the fruits of gospel living in the home. Blaise and his wife, the couple in a white t-shirt and a blue dress on the back row, were expecting a child at the time. Because work is scarce, the family lives largely off what their garden and chickens produce. Brother Kola has also labored many years to build and operate schools for the children in this rural district of Kinshasa.

The picture above the dining room table was consistent with the Christ-centered nature of their home.

President Kola’s profession as a schoolteacher is evident in his careful record-keeping, his pains for perfect French grammar, and his meticulous handwriting.

Brother Kola is an enthusiast for family history and the steward of unique treasures of Church history in the Congo. Irreplaceable photographs, myriad documents and letters, and a handwritten draft of a manuscript with details of thirty years of Church history in the DR Congo. One treasured letter sits in the center of the table — from Carol, a sister in Salt Lake City whose address was in a Book of Mormon given to President Kola when he was investigating the Church.

Family Search International has contracted with Brother Kola’s non-profit group to do the oral history work.

The village chief we were to meet with lived in M’poki N’sele, in the heart of the Bateke Plateau. A first effort to glean detailed information about the location from Google Maps was of little help.

Traveling in just this small region of the DR Congo gave some sense of the vastness of the country, relatively little of which is penetrated with transportation arteries. Though on the map you would think we were not very far away in inches from Kinshasa, we were in truth a world away.

After a while, we left the paved highway. Apart from an occasional motorcycle or large truck, we were the only vehicle on the road.

Not far from our destination was this little “lake” of unknown depth that we had to cross in order to turn onto the fork of the “road” at right. Our intrepid driver did not stop to measure the depth, but simply plowed ahead.

The engine and exhaust were underwater. I don’t know what we would have done if the engine had stopped.

Transportation in this beautiful village was mainly by footpath.

An older son of the village chief removed the log barriers from the gate of the compound and we were escorted to this shady bower to wait for his arrival.

A handful of children and adults began to gather.

In his hands he held the staff of his office fringed with buffalo hair and topped with the image of a man and a woman.

Speaking in the Lingala language, Brother Kola introduced the efforts of FamilySearch International to gather records worldwide. He said that these efforts would allow their family history to be preserved safely forever, to the end of the world.

The chief was grateful for this effort and gladly expressed his willingness to help. He felt that the effort would also assist in resolving some local issues, such as disputes over tribal leadership or when people might mistakenly marry cousins who were too close.

Earlier in the visit, the chief had already begun to discuss his lineage with the elder to his right, counting generations on his fingers as he spoke. Without help, he was unable to remember any progenitors beyond his grandfather. Eventually, family members in this and other villages would be consulted in order to verify and fill out the record of ancestors and descendants.

After the discussion, the chief had the Tam Tam (drum) brought out. Note the wide-eyed expression of the little girl at left. The chief explained that in their village, Friday, the day we were visiting, was the day in which the ancestors were honored. No one goes to work in the fields on Fridays. When he sounds the drum, the people assemble. On Fridays, the chief may experience “dreams” that provide direction for his people. For example, he may receive warnings that the people should not go into a certain part of the forest, or that the women should not go alone to the stream before a certain time of day.

The chief also brought out a leopard skin associated with his office.

The hope is that someday these beautiful children will be blessed by Brother Kola’s diligent efforts.

The distances and other complexities of this massive gathering effort make it a daunting task. In all, there are seventeen different non-profit groups who have won bids to deploy to different parts of the Congo. Brother Kola’s team alone, including those shown here as well as others, has contracted with FamilySearch to collect 400,000 names in twelve months. The audacity of it all is a tribute to the faith of those whose vision initiated the effort and the diligence of those who ultimately will make it successful.

Some of the material in this article has been adapted from oral history interviews. My sincere appreciation to Sylvestre Muzengo Mambasah, Thierry Mutombo, and Daniel Tusey Kola and his family for sharing their inspiring stories. I am grateful to Sylvestre Muzenga Mambasah for reviewing the material in this article. Thanks also to Matthew K. Heiss of the global support and training division at the Church History Library for his encouragement and support in the publication of this story, and for affirming permission on behalf of The Church of Jesus Christ of Latter-day Saints to use oral history-related material found in this article.

I stand in awe of the faithfulness of our fellow Saints in Africa. We are so grateful for them. They set the bar so high in their examples for us to follow.